Living in a COVID-free bubble at the bottom of the world: CWRU Physics PhD student Allen Foster on living at the South Pole during a global pandemic 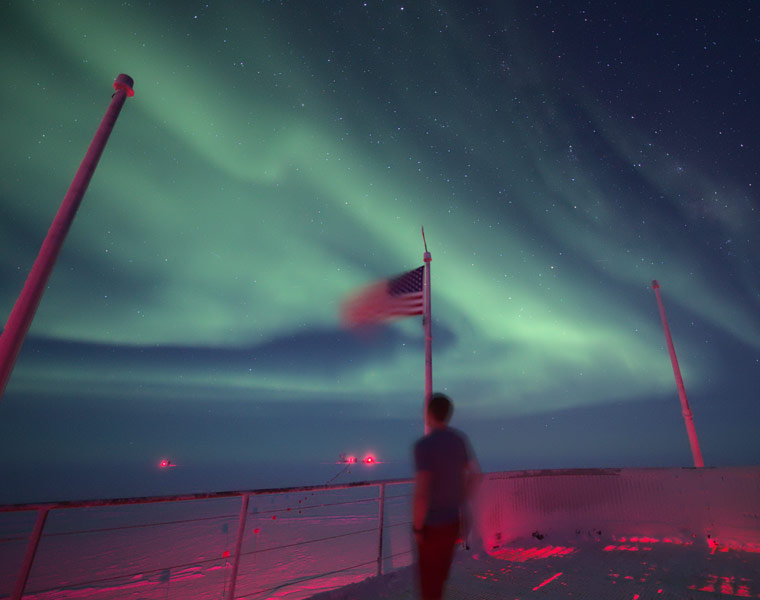 In this 10s exposure photo, Allen Foster stands on the observation deck looking out at the Dark Sector, with the temperature at about -80F. Foster was in shorts and a T-shirt because he had just come from the gym to look at the auroras. Photo by Zach Tejral. 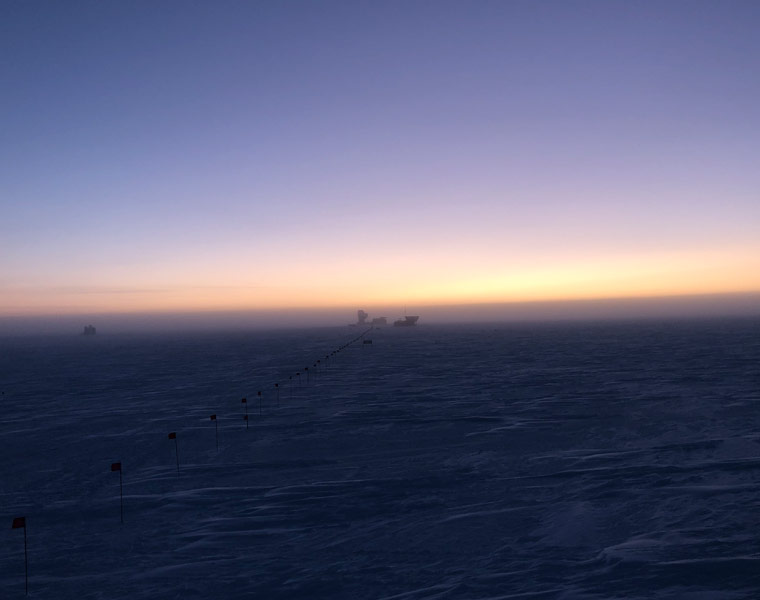 The sun sets over the Dark Sector. Sunset lasts for a few weeks as the sun slowly dips below the horizon. 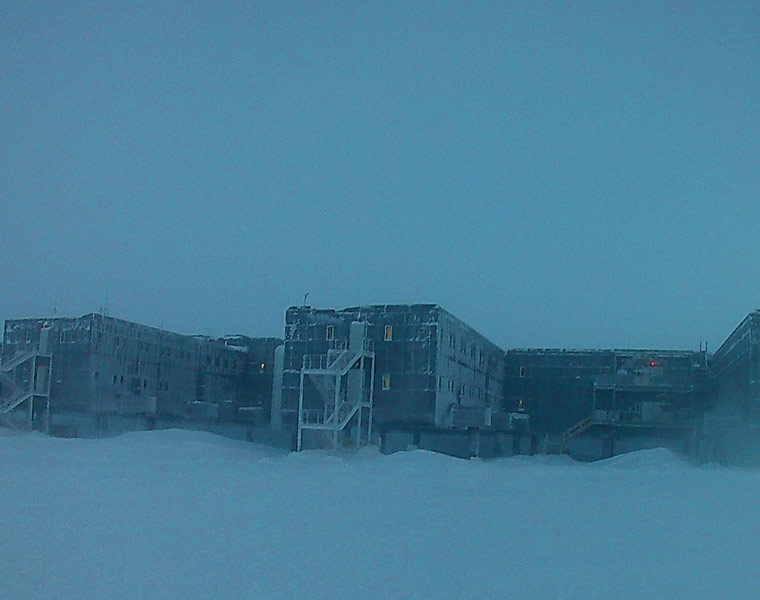 The back of the Amundsen-Scott South Pole Station during civil twilight and high winds blowing snow into the air, causing the flat grey appearance. As winter approaches, the snow builds up on the outside of the station. 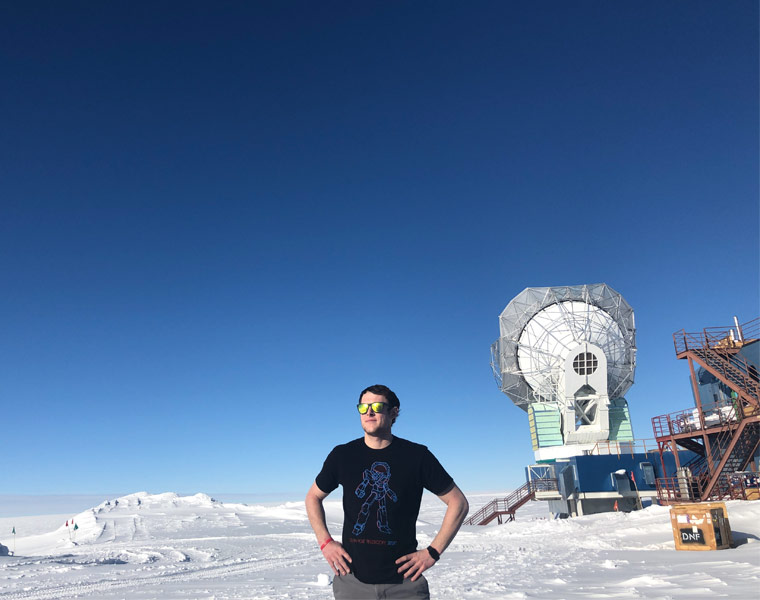 Allen Foster stands in front of the South Pole Telescope earlier this year, when the sun was still up and the weather was -15F.

When fourth-year PhD physics student Allen Foster arrived at the Amundsen-Scott South Pole Station in Antarctica in early January for a 10-month research assignment, he had no idea that the rest of the world soon would be hit by a global pandemic. With no flights in or out since early February, the South Pole may be one of the only places on earth where you can’t come into contact with COVID-19. Face masks, social distancing, frequent hand washing and food shortages are things that Foster and his colleagues have read about but don’t experience first-hand. They try to imagine all the changes that await them months from now.

Foster’s been braving extreme conditions, including temperatures that may plunge to -100 degrees F before wind chill, for a research project in experimental cosmology as part of CWRU Physics Professor John Ruhl’s laboratory. Foster’s work involves the South Pole Telescope, a large (10-m diameter) telescope used by researchers to explore the origins and evolution of our universe by imaging the Cosmic Microwave Background Radiation, a remnant glow from the Big Bang. Ruhl was part of an international team that helped design and build the telescope.

Foster is one of two “winter-overs” in charge of maintaining the South Pole Telescope’s winter operations. That includes scheduling observations, analyzing data real-time, and performing preventive maintenance such as greasing gears and bearings.

We reached out to Foster with the simple question—what’s it like to live at the South Pole during this global crisis? Here’s what he shared.

The South Pole is (I presume) virus free since we closed the station on Feb 15, and we will not reopen until at least late October. The 42 people on station are all very anxious to see what the United States Antarctic Program (USAP) will decide to do at the end of this winter, and whether countries like New Zealand will be open for travel. Not only is it unclear what the state of the world will be come November (which is when I was scheduled to leave the ice) but after having been in isolation for 10 months, our immune systems will be much weaker than normal so if no vaccine is available by then, will we even want to leave?

As for our observation of the world’s pandemic … it doesn’t really seem to be real. We get the NY Times Digest daily down here, and all we seem to hear about is COVID-19, quarantine and death tolls. It’s quite morbid. I never would have thought that spending a year at the South Pole with 41 other people would make me one of the most social people I know—perhaps one of the most social in the entire world!

Work here is completely normal, even down to our weekly telecons with the north—the only difference being that everyone up north is calling in from their homes, not their offices. I remember my mother calling me a few weeks ago, distraught after having gone to the grocery store; she wasn’t prepared for the reality of everyone wearing masks. I don’t think I will be able to comprehend the changes in daily life until I get back to the [United] States and experience it for myself. Living the pandemic second-hand through my conversations with my fiancee and my family, doesn’t have the same impact.

It’s interesting to think that I might be asked by my kids or my grandkids what it was like during the pandemic … But I will only be able to say that I was in the safest, most remote place on Earth for the entire year. That I watched from afar. That I wasn’t able to be with my fiancee during her months of stay-at-home order.

I wish I had more insightful things to say, and that I felt more strongly about the pandemic’s effects back home. But I’m living in a bubble at the bottom of the world, which happens to be probably the safest place on Earth, even though it’s -80 degrees F outside and you could freeze to death in minutes; it’s hard to imagine such an invisible killer as a global pandemic.

You can learn about Foster’s South Pole adventure on his blog and follow the South Pole Telescope on Twitter.