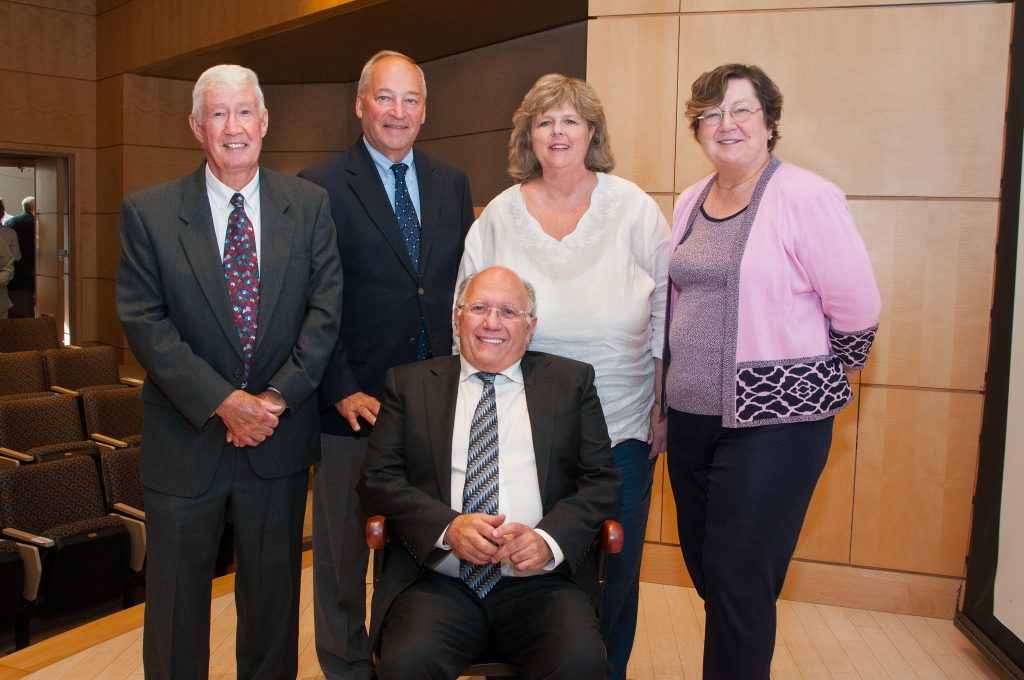 For more than 30 years, Northeast Ohio institutions have partnered to work at the forefront of HIV/AIDS and immunology research.

Case Western Reserve celebrated the next phase of that legacy of innovation and collaboration Tuesday as Rafick-Pierre Sékaly, PhD, one of the world’s leading scientists in AIDS research, human immunology and immunotherapy, received the inaugural Richard J. Fasenmyer Professor of Immunopathogenesis at the university’s School of Medicine.

Sekaly joins two internationally recognized investigators of HIV/AIDS who were among the first researchers to study the virus: Leonard Calabrese, DO, director of the R.J. Fasenmyer Center for Clinical Immunology at Cleveland Clinic, and Michael Lederman, MD, the Scott R. Inkley Professor of Medicine and co-director of the Center for AIDS Research at Case Western Reserve, and a physician at University Hospitals Case Medical Center.

Calabrese and Lederman have collaborated for decades to investigate potential relationships between autoimmune, inflammatory diseases, such as rheumatoid arthritis, and HIV/AIDS.

“It really comes to a culmination on a day like today, when Dr. Sékaly has now joined this group of wonderful doctors in a collaborative effort between two wonderful institutions that make things happen,” John Baechle, president of the Richard J. Fasenmyer Foundation board of trustees, said during a ceremony celebrating Sekaly’s appointment to the endowed professorship.

Sékaly, who earned his doctorate from the University of Lausanne in Switzerland, brings vast experience in molecular mechanisms that regulate the human immune response system. His work has resulted in the generation of novel approaches in cancer and HIV vaccines.

Sékaly’s research program at Case Western Reserve focuses on, among other objectives, identifying and eliminating latent HIV infection. That critical step would result in better-adapted immune-based therapeutics with a functional cure for HIV infection.

During remarks at the chairing ceremony, Sékaly emphasized the importance of committing himself to excellence, embracing new technologies and collaborating with talented colleagues throughout his career. “I strongly believe that, if I want to take [my work] to my ultimate goal, which is a cure, whether it is to HIV or to cancer, Case Western Reserve is the best place to do it,” he said.

Sékaly’s work has led to more than 227 peer-reviewed articles in scientific journals and more than 23 patents. He is principal investigator on numerous grants from the National Institutes of Health and foundations, including the Bill and Melinda Gates Foundation and the American Foundation for AIDS Research.

He is also co-principal investigator of the DARE Collaboratory, an international group of more than 30 researchers and doctors dedicated to finding a cure for HIV. Sékaly also serves as co-director of the Center for AIDS Research (CFAR) Proteomics and Systems Biology Core at Case Western Reserve.

“It’s not easy to detail or even summarize Dr. Sékaly’s contribution to science. His hundreds of publications appear in the most prestigious journals,” Lederman said during the chairing ceremony. “But if I can distill his career, I think it’s fair to say that much of what we know about the immunopathogenesis of HIV infection, and what we will know about vaccine responsiveness, has been shaped, and will be shaped, by his work … Over these many years, my collaborations with Rafick have enriched my work and my career.”

In 2011, the foundation awarded a three-year, $3 million to grant to support Calabrese and Lederman’s Cleveland HIV Immunity Project.

The Fasenmyer Foundation supports significant innovative and collaborative efforts in clinical immunology and also seeks to foster business entrepreneurship, promote the free-enterprise spirit and encourage economic development in partnership with the arts.

“We are truly honored that Dick Fasenmyer’s devotion to supporting efforts in clinical immunology, especially those advancing patient support, education and research in HIV/AIDS and related conditions, will have a lasting legacy through the endowment of this professorship, which will support in perpetuity a globally recognized expert in AIDS research and human immunology and immunotherapy,” university President Barbara R. Snyder said during the chairing ceremony. “We could find no one more worthy of this honor than Dr. Rafick-Pierre Sékaly.”