Law students and alumna from the Milton Kramer Law Clinic worked on a federal lawsuit against the City of Akron to protect the civil rights of homeless citizens. After two years, Akron settled the case and agreed to change its policies toward homeless people and pay substantial damages and court costs. 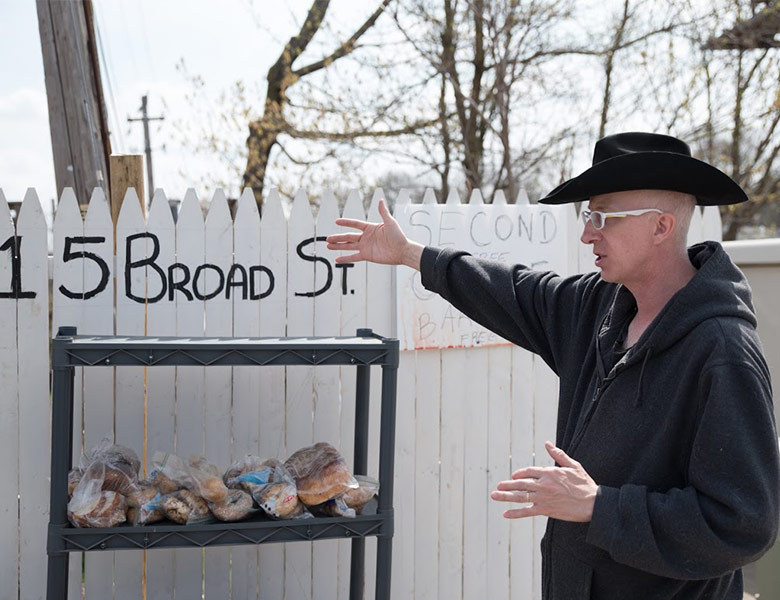 Neighbors filed a lawsuit against the Second Chance Village founder Sage Lewis, pictured, citing nuisance law. The Clinic helped to settle that lawsuit. Meanwhile, the charity was not in compliance with local zoning laws and needed help applying for a conditional-use zoning permit from the city of Akron. Sage Lewis calls the group his “team of lawyers.” “They are awesome,” he said. “They are so smart and really care. You can tell they really want to do a good job.” 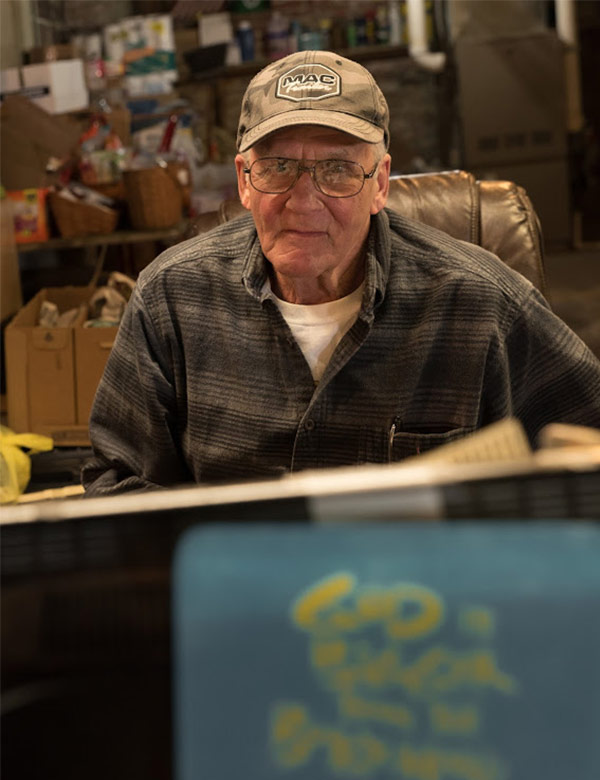 A volunteer at the Second Chance Village spends time helping. So do current and former students from Case Western Reserve University, who stepped in with legal services to help an Akron homeless shelter, Second Chance, keep its doors open. The shelter offers temporary housing to the homeless, providing additional support while residents get on their feet. 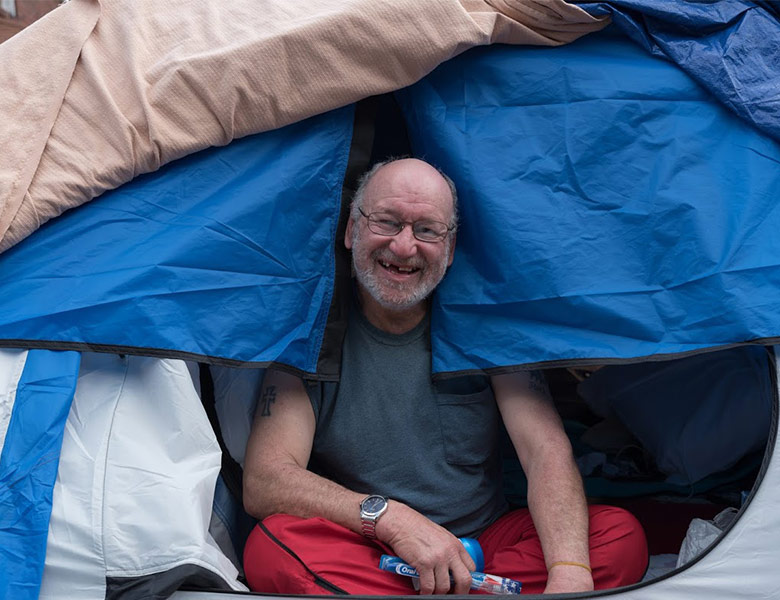 A resident emerges from his tent at the Second Chance Village. Many of the residents at Second Chance are looking for housing and other ways to use their skills in the community. 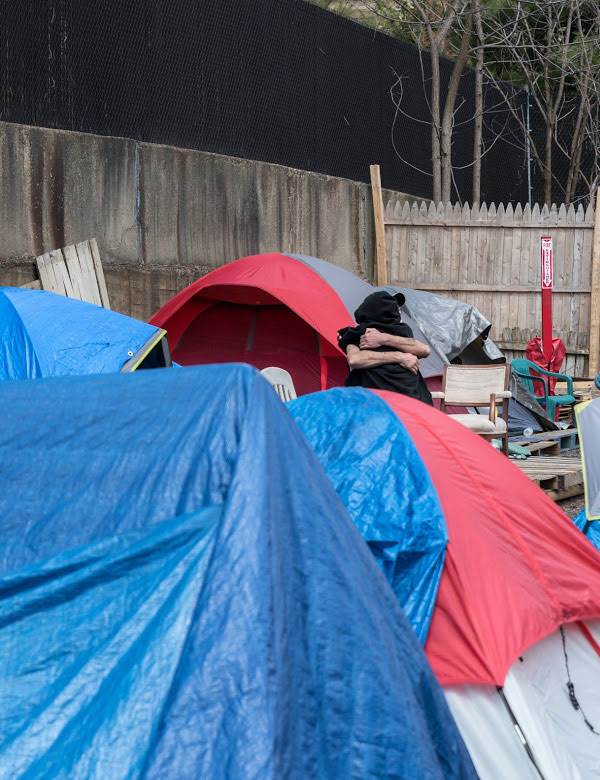 Two residents at Second Chance Village share an embrace. Dozens of tents are pitched at the shelter for the homeless, commonly referred to as a “tent city.” 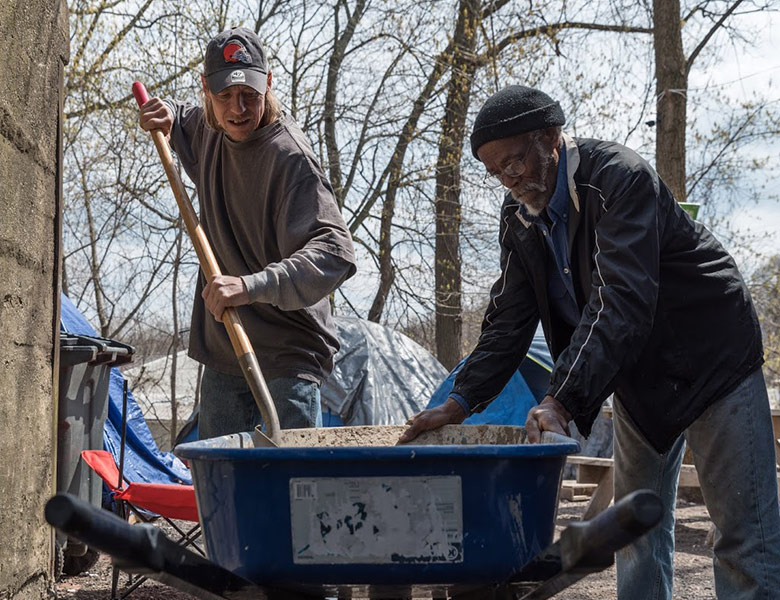 The drug- and alcohol-free facility requires all of its residents to hold a volunteer job to camp there. Behind the main building, a few dozen tents are pitched for the homeless. It’s commonly referred to as a “tent city.” 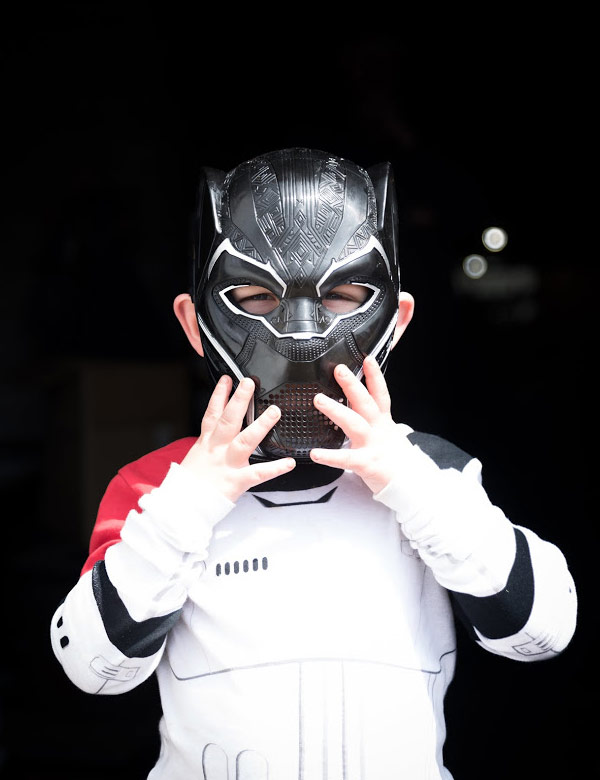 A young boy takes some time for fun. In 2017, Second Chance opened its doors—and its backyard—to the homeless in Akron, Ohio. By most accounts, Second Chance is a way to keep the homeless shelter, while providing additional opportunities while residents get on their feet.

All photos by Matt Shiffler.

Rebecca Sremack, a 2014 CWRU law school graduate who practices law with her father in Akron, heard the charity needed legal assistance and contacted the law school to get students involved. Together, both groups represent the charity’s interests.

During her own time in law school, Sremack worked with CWRU’s Milton A. Kramer Law Clinic Center on a federal lawsuit against the City of Akron to protect the civil rights of homeless citizens. After two years, Akron settled the case and agreed to change its policies toward homeless people and pay substantial damages and court costs.

Yunlang “Claude” Hu, Valerie Villacampa and Samantha Smyth, all 2018 graduates, were part of the charity’s legal team while they were students in the Kramer Law Clinic this spring.

“For me, it’s like a culture shock,” Hu said. “Living here in America, I had only seen the elite side of it. Second Chance has a uniqueness because it is not a religiously affiliated organization, so it provides freedom of choice for homeless people. They have computers, and room for people to do crafts and store clothes. This organization is a great help to the Akron community.”

The students conducted extensive legal and factual research, interviewed the homeless residents, drafted discovery requests, conducted depositions and negotiated with the neighbors and city. As of this writing, Second Chance Village is still open, and the residents have not been forced to move out.

However, not everyone agreed.

Neighbors filed a lawsuit against the charity’s founder Sage Lewis, citing nuisance law. The law clinic helped settle the lawsuit. Meanwhile, the charity was not complying with local zoning laws and needed help applying for a conditional-use zoning permit from the city of Akron.

The legal teams remains hopeful for a positive resolution.

“Working on this case brings back the excitement of being in law school, and of preparing for your first discovery,” Sremack said. “It’s extraordinary to have the students’ help and exceeds the vast majority of what a law firm could offer.”

The graduates said they were grateful to have worked on the cases and learned more than they could have imagined from the experience. They were particularly fond of Professor Avidan Cover and how he allowed them to handle all the various components of the cases.

“He gives everyone an equal opportunity to try different things,” Smyth said. “We all took different parts of the deposition, so we all got that experience. He does a really good job of making sure everyone has the opportunity to have multiple experiences.”