More than 70 CWRU students sign up to provide volunteer assistance

The civil war in Yemen has eclipsed the conflict in Syria as the world’s worst humanitarian crisis, with as many as 80,000 deaths between March 2015 and August 2018. A recent United Nations report concludes that both sides of the Yemen conflict have committed war crimes and crimes against humanity.

Students are working in teams in the first comprehensive effort to document atrocities, laying the foundation for successful prosecutions of the responsible parties. 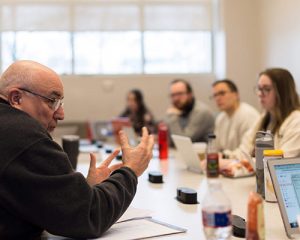 James Johnson, director of the War Crimes Office, said he expected a handful of volunteers. However, more than 70 students—including Master of Laws students fluent in Arabic—volunteered to assist in the effort.

“When we put the word out about this last semester, we didn’t expect this kind of response,” said Johnson, a former chief of prosecutions for the Special Court for Sierra Leone. “Despite the workloads and pressures of law school, these students are volunteering their time because they see this as an opportunity to make a difference with respect to the growing humanitarian crisis in Yemen.”

“This research will be invaluable to the international community going forward, and I’m so proud of the way our students have responded to this challenge,” Johnson said.