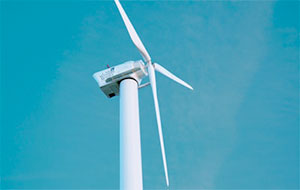 A regional team including researchers from Case Western Reserve has won $4 million to design a wind farm in Lake Erie—along with the possibility they can compete for $46 million more to build it.

The U.S. Department of Energy announced last week that Northeast Ohio’s Project Icebreaker is one of seven proposals nationwide to advance in the high-stakes competition to prove the promise of offshore wind power.

LEEDco, the Lake Erie Energy Development Corp. formed in 2009, created the Northeast Ohio public-private-academic partnership behind Project Icebreaker. The organization’s proposal called for the installation of nine 3-megawatt turbines seven miles off the shore. The challenge now is to determine the details of drilling into the lake’s floor, transporting the structures out into the water, and finally getting them to stand—and stay—upright.

Ultimately, the goal is to demonstrate how to build a wind farm that provides power at the same cost as traditional electric plants when the cost of construction, maintenance and energy production are averaged over the 20-year life of the wind turbines.

“There are 8,000 parts in a wind turbine and every little thing we can do to reduce the cost or increase the energy produced is in play,” said David Matthiesen, a professor of materials science and engineering at Case Western Reserve and the research team leader for Project Icebreaker’s research and development group. Mathiesen also is director of Case Western Reserve’s Wind Energy Research and Commercialization Center, part of the university’s Great Lakes Energy Institute.

With support from the state of Ohio, the center erected one wind turbine on campus and two in Euclid. The turbines provide energy but primarily are research instruments used as test beds for new products, materials and technologies developed by academic and commercial partners, many of which also are involved in the offshore project.

“Wind energy research and the three wind turbines we have provide us unique opportunities to explore an important future area of energy production for the U.S.,” said Jeffery L. Duerk, dean of the Case School of Engineering.

The energy institute supports faculty in energy research by promoting collaborations—including industry and university partnerships. Since the institute’s inception in 2008, CWRU has quadrupled its level of energy-related research.

Part of the funding growth reflects increasing focus on energy across multiple engineering disciplines. In this project, for example:

The scientists will use field data and computer models to predict how the structures would react to waves, wind and ice. They‘ll test coatings designed to keep the blades free from ice build-up, enabling the turbine to keep producing energy in the worst of weather.