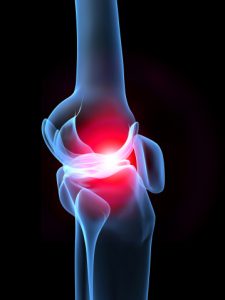 A recent lab discovery is a step toward implantable replacement cartilage, holding promise for knees, shoulders, ears and noses damaged by osteoarthritis, sports injuries and accidents.

“We think that the capacity to drive cartilage formation using the patient’s own stem cells and the potential to use this approach without lengthy culture time prior to implantation makes this technology attractive,” said Eben Alsberg, associate professor in the Departments of Biomedical Engineering and Orthopaedic Surgery, and senior author of the paper.

The team put transforming growth factor beta-1 in biodegradable gelatin microspheres distributed throughout the sheet of stem cells rather than soak the sheet in growth factor.

The process showed a host of advantages, Alsberg said.

The microspheres provide structure, similar to scaffolds, creating space between cells that is maintained after the beads degrade. The spacing results in better water retention—a key to resiliency.

The gelatin beads degrade at a controllable rate due to exposure to chemicals released by the cells. As the beads degrade, growth factor is released to cells at the interior and exterior of the sheet, providing more uniform cell differentiation into neocartilage.

The rate of microsphere degradation and, therefore, cell differentiation, can be tailored by the degree to which the microsphere are cross-linked. Within the microspheres, the polymer is connected by a varying number of threads. The more of these connections, or cross-links, the longer it takes for enzymes the cell secretes to enter and break down the material.

After three weeks in a petri dish, all sheets containing microspheres were thicker and more resilient than the control sheet. The sheet with sparsely crosslinked microspheres grew into the thickest and most resilient neocartilage.

The results indicate that the sparsely cross-linked microspheres, which degraded more rapidly by cell-secreted enzymes, provided a continuous supply of growth factor throughout the sheets that enhanced the uniformity, extent, and rate of stem cell differentiation into cartilage cells, or chondrocytes.

The tissue appeared grossly similar to articular cartilage, the tough cartilage found in the knee: rounded cells surrounded by large amounts of a matrix containing glycosaminoglycans. Called GAG for short, the carbohydrate locks water ions in the tissue, which makes the tissue pressure-resistant.

Testing also showed that this sheet had the highest amount of type II collagen—the main protein component of articular cartilage.

Although the sheet was significantly stiffer than control sheets, the mechanics still fell short of native cartilage. Alsberg’s team is now working on a variety of ways to optimize the process and make replacement cartilage tough enough for the wear and tear of daily life.

One major advantage of this system is that it may avoid the troubles and expense of growing the cartilage fully in the lab over a long period of time, and instead permit implantation of a cartilage sheet into a patient more rapidly.

Because the sheets containing microspheres are strong enough to be handled early during culturing, the researchers believe sheets just a week or two old could be used clinically. The mechanical environment within the body could further enhance cartilage formation and increase strength and resiliency of the tissue, completing maturation.