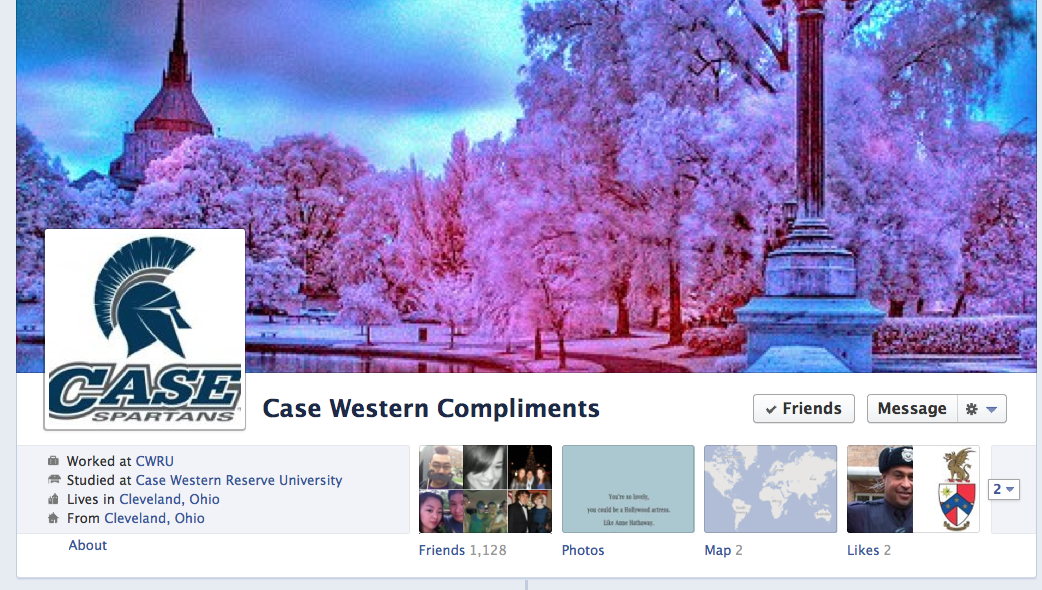 Kindness has gone viral in higher education—and Case Western Reserve University is part of the trend.

Last week, a student at Case Western Reserve launched a university compliments page on Facebook, which shares kind, anonymous comments about individuals across campus. The site’s founder also chooses to remain unknown—keeping with the anonymity of the rest of the page.

In the eight days since its launch, the page has attracted more than 1,100 friends and shared upward of 200 compliments to members of the Case Western Reserve community, such as:

To share a compliment, a member of the campus community simply sends a comment about any person on campus to the Facebook page’s administrator, who, in turn, posts them on Facebook without identifying the source.

“My peers are the most hard-working people I know, but I know that it is so easy for students here to define their value simply by their academics or career aspirations,” said the site’s anonymous organizer. “I’m hoping that by reminding them that what people value in them is their friendship, honesty, humor, compassion and support, we can all become or remain well-rounded individuals. It can only serve to help us in the long run.” 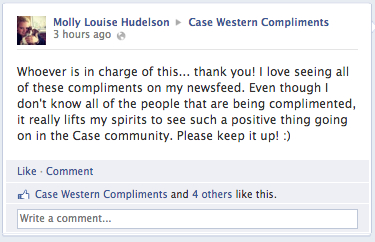 Anonymity allows users to express their true feelings of admiration, whether the recipient is a best friend or a stranger who simply shares a smile on the street.

Junior Eric Vondrak received one of the first posted compliments, and said he thinks the anonymous, online approach enables people to express sincere, positive emotions without worrying that the recipient might find the expression “socially awkward or weird.

“I can see it developing into a sort of pay-it-forward thing,” he added, “where people who get compliments then pass it on—which can definitely benefit the morale of the campus, especially during stressful times of the year.”

The page is geared toward students, but many students have highlighted staff—among them an unnamed evening driver of the “Greenie,” Case Western reserve police officer Mark Chavis and Amanda McCarthy, associate director of First-Year Experience and Family Programs. 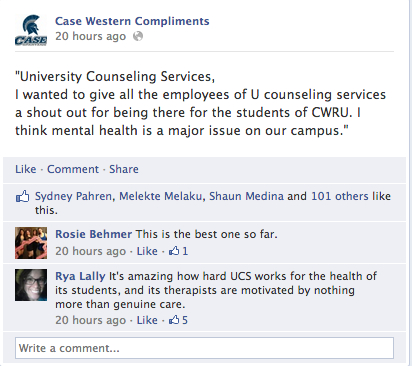 “To know that someone thought enough of my work to send a compliment really does mean the world to me and motivates me to work even harder for our campus community,” McCarthy said.

The idea of a Facebook compliments page originated last month at Queen’s University in Kingston, Ontario. Since then, pages have sprouted up at universities across the country, and the concept has gained national and international attention, including articles in The Huffington Post and Time.

Case Western Reserve’s site organizer saw a similar page from Northwestern University and decided on a whim to start one here. Now, the page’s inbox gets filled with more than 50 compliments to post per day. Though he or she won’t give away any personal details, insisting he or she has done nothing special and simply serves as a messenger, many peers would like to pay him or her a compliment of their own.

James Silay, a junior who already has received more than one compliment, thinks the page’s administrator underestimates his or her impact.

“A lot of times I think that we forget to thank the people that have made a difference in our day and we get stuck in the routine of going from one meeting or class to the next,” he said. “I think it is one of the best new initiatives to come out of this university and I hope that it stays around for a long time.”