Case Western Reserve researchers already demonstrated that a single protein plays a pivotal role in the use of nutrients by major organs that allow for the burning of fat during exercise or regulating the heart’s contractile and electrical activity. Now they have found a new benefit of Kruppel-like Factor 15 (KLF15): keeping the body in metabolic balance.

The discovery, which highlights how KLF15 affects the availability of nutrients in the body, may also have significant implications for scientists’ ability to understand ways that the body metabolizes different medications. The findings appeared last month in the journal Nature Communications. 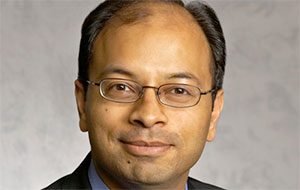 “It’s important to understand how nutrients are acquired, how they are made available to tissues, how they are used, and how disease alters the dynamics of the process,” said Mukesh K. Jain, the Ellery Sedgwick Jr. Chair & Distinguished Scientist and director of the Case Cardiovascular Research Institute at Case Western Reserve University School of Medicine. “The heart, for example, is a very energy-demanding organ that succumbs to failure if it has insufficient access to nutrients or fails to properly utilize nutrients.”

This latest project emerged from earlier work in the Jain laboratory that revealed KLF15’s role in the metabolism of sugars, fats and proteins, which, in turn, affects cellular energy production. Given how essential this protein is to nutrient use, Jain and his colleagues hypothesized that it also might be important to ensuring nutrient availability.

“The beautiful aspect of this work is that nature designed this very clever molecule to regulate both nutrient availability and use, and the molecule functions broadly across all nutrient classes, which is very exciting. That’s what makes it an important discovery,” said Jain, also the scientific director of the Harrington Discovery Institute, chief research officer of the Harrington Heart & Vascular Institute, and chief scientific officer of University Hospitals Health System.

The researchers elected to focus on KLF15 with regard to bile acids, which aid in the absorption of nutrients. More specifically, they focused on lipid-soluble nutrients, groups of molecules that include fats, vitamins, oils and other elements key to the structure and energy of cells. Lipids were appealing because they are especially dependent on bile acids for absorption.

Investigators studied bile production and lipid absorption in mice deficient in the KLF15 protein. KLF15-deficient mice produced 40 to 50 percent less bile acid than normal mice, making them less capable of absorbing the lipids and the nutrients that contained.

By understanding how KLF15 regulates bile acid production and elimination, Han explained, “it may be possible to develop therapies that will change the course of diseases where bile acids are overproduced, such as cholestasis or gallstone development.”

The pathways involved in bile acid elimination are also the same required for appropriate metabolism of many drugs.

“If Drs. Han and Zhang’s hypothesis is right, then additional insights into the KLF15 pathway may not only help prevent diseases affected by bile acid amounts, but it could have major implications for drug metabolism,” Jain said. “That’s a future direction.”