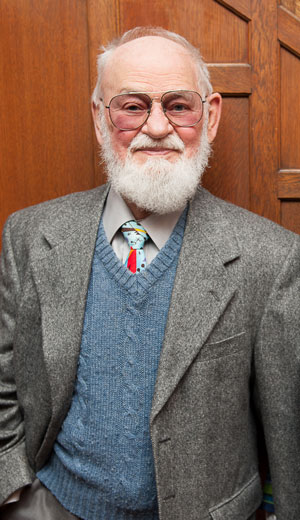 The work of Julian Stanczak, world-renowned painter and pioneer in Optical Art, will be featured in a series of four exhibitions at Case Western Reserve University’s Kelvin Smith Library. The first exhibit, “The Genesis of Perceptual Art,” will be on display through Nov. 29 in the library’s newly renovated art gallery.

“Case Western Reserve University was honored to present Julian Stanczak with an honorary doctorate this past spring,” said Lynn Singer, the university’s deputy provost and vice president for academic affairs. “Now, we are incredibly fortunate to exhibit his pioneering Perceptual Art at Kelvin Smith Library, and to hear directly from a great living artist how he creates such visual radiance in his abstract paintings. Stanczak also compels us with his life story, which is one of triumph over hardship, injury, pain and intolerance.”

Born in Poland in 1928, Stanczak was imprisoned in a Siberian labor camp during World War II. While there, he permanently lost the use of his right arm before his escape at age 13. Eventually making his way to a Polish refugee camp in Uganda, Stanczak was able to take his first private art lessons and learn to paint and write with his left hand.

Stanczak moved to the United States in 1950 and earned a Bachelor of Fine Arts from the Cleveland Institute of Art and Master of Fine Arts from Yale University. His meticulously crafted Perceptual Art—layered patterns of color with effects of transparency and light—represents a conscious decision to leave his wartime experiences behind him. His substantial body of work has all been produced in a modest house and studio in Cleveland, where he and his wife Barbara, also an artist, have lived since 1964.

The series at Kelvin Smith Library is a retrospective of Stanczak’s work, moving in chronological order of the art’s creation. The first installment features selected silkscreen prints, similar to work that was exhibited in Stanczak’s first major show, “Julian Stanczak: Optical Paintings,” held at New York City’s Martha Jackson Gallery in 1964. It was the exhibition’s review in Time Magazine that coined the term “Op Art,” a movement that quickly blossomed into an international phenomenon.

Stanczak’s work has been exhibited extensively around the world and is represented in more than 85 museums and 100 public collections. Also a distinguished educator, Stanczak began his 38-year teaching career in 1957 at the Art Academy of Cincinnati and the University of Cincinnati. In 1964, he became a professor of painting at Cleveland Institute of Art, a position he held until his retirement in 1995.

The exhibit’s opening reception will be held Wednesday, Oct. 16, from 4 to 6 p.m., with remarks by Henry Adams, professor of American art.. A virtual exhibition will also be available for viewing at library.case.edu.

“Stanczak’s art stands at a boundary between art, psychology, mathematics, science and metaphysics,” said Adams. “The exhibitions at Kelvin Smith Library present a unique opportunity for interaction and discussion across disciplines at the university and beyond.”

The exhibitions are free and open to the public (with a valid ID). The show hours are the library’s regular business hours: Sunday, noon to midnight; Monday through Thursday, 8 a.m. to midnight; Friday, 8 a.m. to 8 p.m.; and Saturday, 9 a.m. to 5 p.m.

The dates and titles of the four exhibits are: