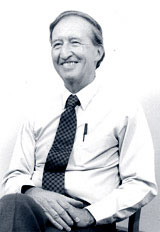 John Kennell, professor emeritus of pediatrics at the School of Medicine, passed away Aug. 27. He was 91.

After earning his bachelor’s and medical degrees from the University of Rochester, Kennell served in the U.S. Navy from 1947 to 1949 prior to entering residency at Harvard Medical School.

After completing his pediatric internship and residency at Children’s Hospital Medical Center in Boston in 1951, Kennell joined the Department of Pediatrics at Case Western Reserve University School of Medicine and University Hospitals Rainbow Babies & Children’s Hospital and remained there throughout his tenure. Even after his formal retirement, Kennell continued as a teacher and researcher.

He is best known for two research findings.

The first was on the importance of maternal-infant contact within minutes of birth in order to form a lasting attachment. His studies led to changes in hospital procedures worldwide to allow mothers to have contact with their newborns immediately after birth and later opened up labor and delivery areas to fathers and families.

His second major contribution was demonstrating that having a trained companion during labor and delivery greatly reduces labor time, perinatal complications, and the need for medication and cesarean delivery. He coauthored The Doula Book and helped create the organization Doulas of North America.

The family suggests memorial contributions be made to DONA International or HealthConnectOne.

His family has planned a memorial service for Sunday, Sept. 15, at 2 p.m. at Amasa Stone Chapel. A reception will follow at Judson Manor.