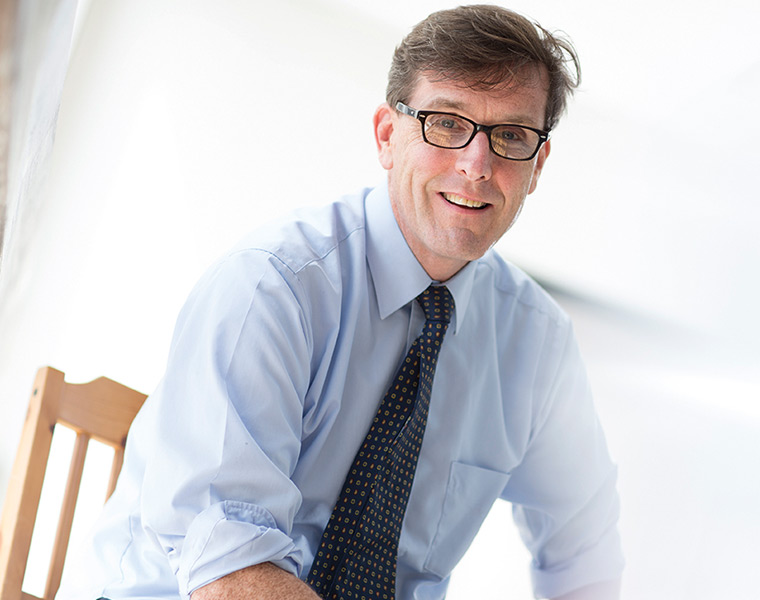 Provost Bud Baeslack announced today that the Board of Trustees has approved the appointment of James McGuffin-Cawley as interim dean of the Case School of Engineering, effective July 1.

McGuffin-Cawley, an alumnus of the school and member of its faculty since 1991, assumes the interim role upon the departure of current dean Jeffrey L. Duerk, who becomes executive vice president and provost at the University of Miami on July 1.

“Jim’s breadth of experience in the Case School of Engineering, along with his extensive external engagement, make him particularly well suited to lead you during this time of transition,” Provost Baeslack said. “I am grateful to him for taking on this responsibility, and confident he will do an outstanding job of maintaining the great momentum the school has achieved in recent years.”

McGuffin-Cawley is the Arthur Holden Professor of Engineering and an accomplished researcher, teacher and liaison with industries throughout Northeast Ohio. In the mid-2000s, he served for five years as Case School of Engineering’s associate dean for academics, then spent nine years as chair of the Department of Materials Science and Engineering, where he led significant curricular reform. Last year Dean Duerk named him the school’s associate dean for research. McGuffin-Cawley also has served as the university’s governing board representative and executive committee member of America Makes (previously known as the National Additive Manufacturing Innovation Institute) since its creation five years ago.

After receiving his undergraduate degree in ceramic engineering from Alfred University, McGuffin-Cawley went on to earn his doctorate in ceramic science from Case Western Reserve in 1984. He then spent two years working in Northeast Ohio at NASA before joining the engineering faculty at The Ohio State University. He returned to Case Western Reserve in 1991.

Provost Baeslack also announced that the university will conduct a national search for the school’s next permanent dean. Those who would like to nominate Case School of Engineering faculty or staff for service on the dean search committee should submit those names to Susan Karaba at susan.karaba@case.edu, no later than 5 p.m. Friday, June 30.