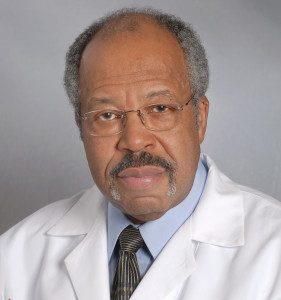 When Jackson T. Wright Jr. began practicing medicine in the 1980’s, physicians knew that the risks of high blood pressure were greater in African-Americans than Caucasians. But what was not yet understood was how different effective prevention and treatment strategies were between the two patient populations.

Over the ensuing decades, Wright’s dedication to research that included large numbers of African-Americans provided essential findings to inform physicians’ approaches to hypertension among both populations. Yesterday, the same day that The New England Journal of Medicine (NEJM) released one of the most groundbreaking studies of his storied career, Wright received the American Heart Association’s 2015 Clinical Research Prize for outstanding achievement in clinical cardiovascular science.

“There is still much to do,” Wright said. “We need to define better treatment for both the prevention and the treatment of hypertension. It would be a strong step forward if we could develop more effective strategies to prevent the development of hypertension rather than simply treating it and its complications.”

In addition to receiving Monday’s honor, Wright also participated in discussions of results of the landmark SPRINT (Systolic Blood Pressure Intervention Trial) study during the association’s scientific meetings in Orlando. In September, the National Institutes of Health (NIH) suspended the five-year study of more than 9,300 patients nearly two years early because the findings were so significant the agency wanted to release them as soon as possible. At the time, officials indicated that the results showed that driving systolic levels lower than previously recommended provided extraordinary benefits. Wright, also the program director of the W.T. Dahms MD Clinical Research Unit at University Hospitals Case Medical Center, was a co-principal investigator and lead author on the study.

The systolic figure is the top number cited in blood pressure readings and reflects the pressure on arteries when the heart contracts. These results are likely to prompt extensive discussion regarding whether the official recommended level of 140 should be revisited.

This study is only one of the major national trials that Wright has helped lead that have yielded essential new findings regarding cardiac disease and treatment. One area of particular interest has been preventing the consequences of ongoing hypertension that leads to a cascade of harmful health effects: heart attack, stroke, congestive heart failure, kidney damage, vision loss and dementia. Wright’s work helped lead to efforts in NIH-funded clinical trials that acquired the evidence necessary to base sound treatment and prevention conclusions, not only for African-Americans and Caucasians, but other ethnic populations as well.

“Hypertension is the leading cause of death in the world, and it is particularly epidemic within the African-American community,” Wright said. “Everyone in my family had hypertension, and my blood pressure was on its way up when I started out my medical career, so I had a vested interest in the disease.”

Because heart disease disproportionately affects minority populations, Wright also designed clinical trials that investigate how various therapeutic and preventative approaches to cardiovascular disease affect these groups. His contributions have been instrumental in describing the prevalence of hypertension among African-Americans and developing clinical guidelines to address it. The 1,100-participant, 21-center African-American Study of Kidney Disease in Hypertensives Trial (AASK) reported in 2002 that African-American patients with high blood pressure have up to a 20-fold risk for renal disease requiring dialysis compared to majority populations. The 42,488-participant Antihypertensive and Lipid-Lowering to Prevent Heart Attack Trial (ALLHAT), with more than 15,000 African-American participants, reported on the ideal antihypertensive drug regimen for preventing cardiovascular and kidney events among various ethnic groups.

His peers in hypertension clinical research credit Wright with playing a pivotal role in uncovering how hypertension manifests itself uniquely among different patient populations and how that knowledge could contribute to narrowing the health disparity gaps that negatively affect African-Americans.

“He has been an important driver in enrolling minorities in hypertension clinical trials,” said fellow clinical researcher Anne Taylor, the senior vice president for Faculty Affairs and Career Development, the John Lindenbaum Professor of Medicine at Columbia University’s College of Physicians and Surgeons, and study chair for the African American Heart Failure Trial. “But, it is about more than just ensuring minority patients are included. It’s the outcomes of the trial showing the differences and similarities between populations differing in race or ethnicity. This helps guide us in the medical care of patients in a much more focused, directed and personalized way. It’s information that helps with assessment of individual patient risk for disease outcomes, as well as our choice of therapy and monitoring of outcomes of therapy.”

Taylor also commends Wright for supporting minorities to pursue careers in academic medicine and clinical research. He has provided significant leadership for the Program on Careers in Academic Medicine of the National Institute of Diabetes and Digestive and Kidney Diseases and the National Medical Association.

“The roles and responsibilities he has been given are a reflection of the esteem in which he is held,” said colleague Mahboob Rahman, professor of medicine at the School of Medicine, and nephrologist, University Hospitals Case Medical Center and Louis Stokes VA Medical Center. “He holds leadership roles in all the major hypertension studies the NIH has funded in the recent past. That is a reflection of how highly he is regarded.”

Another fellow hypertension researcher, William C. Cushman, professor of preventive medicine and medicine at the University of Tennessee Health Science Center, and chief of preventive medicine at the VA Medical Center, concurs: “His advocacy has had a tremendous impact not only in conducting the clinical trials, but also in disseminating that evidence through educating clinicians and getting that information incorporated into clinical guidelines.”