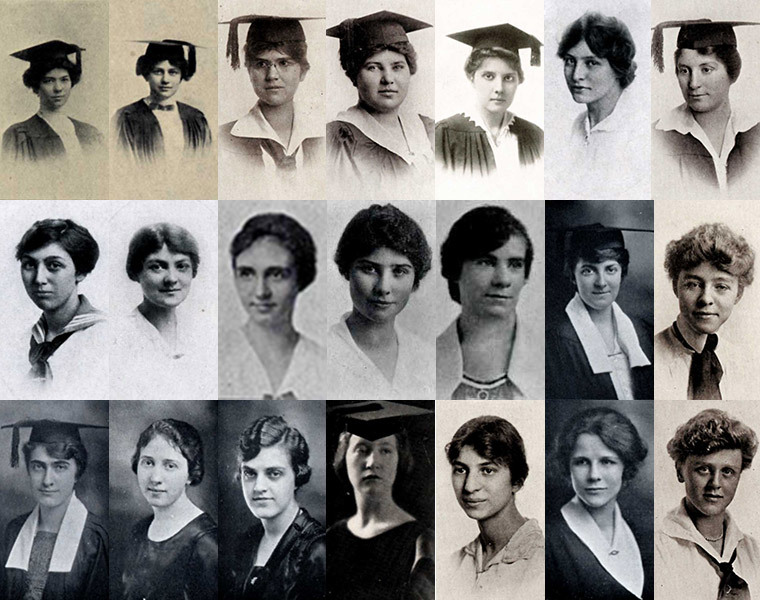 Women from Western Reserve College were active in the fight for suffrage. Photo credit: CWRU Archives

It’s Women’s Equality Day—what does equality look like to you?

Exactly 102 years ago today, Congress certified the 19th Amendment to the United States Constitution to ensure voting rights for women—though full electoral equality for women of color didn’t come until decades later. After decades of activism by suffragists to achieve this right, many thought the issue was laid to rest: the genders were equal.

Women’s Equality Day (Aug. 26), a national day of recognition designated by Congress in 1971, commemorates the amendment’s adoption while highlighting how the decades to follow its passage illustrated “equal rights” were—and remain—an unachieved goal. Gender-based discrimination still pervades countless aspects of daily life, and its effects continue to shape the laws in our country.

At Case Western Reserve University, many dedicated resources focus on the unique daily struggles faced by those who are woman-identified, have uteruses, or are able to become pregnant. From the work of the Flora Stone Mather Center for Women to coursework in the College of Arts and Sciences’ women’s and gender studies program, research guides compiled by staff at Kelvin Smith Library, and even entries in the Encyclopedia of Cleveland History, the university community need not look far to find resources on the topic.

A compilation from staff in the University Archives titled “Celebrating the Campus Suffragists” provides yet another example—it commemorates the centennial of women’s suffrage while recognizing student and community suffragists who advocated for the passage of the 19th Amendment. The first College Equal Suffrage League chapter was founded at Western Reserve University in 1908, and while membership fluctuated over the years, the chapter went on to become part of the Woman Suffrage Party of Greater Cleveland; many of its members are featured in the image above.

To encourage reflection on the continuous struggle for women’s equality in all spheres of life, The Daily asked self-identified women members of the CWRU community to share their thoughts on what equality looks like to them, today.

Answers have been lightly edited for length.

“Women’s Equality Day is always an introspective day for me. It is an acknowledgment and remembrance of the women who petitioned, marched, were imprisoned, and participated in hunger strikes to win the first major victory for women’s voting rights with the 19th Amendment. It also is a time to reflect on the suffrage movement’s major criticism—as a movement that only supported white, middle- and upper-class women’s rights to vote. We can learn much from the suffrage movement on how to organize more inclusively by learning from their mistakes. Finally, this year particularly, I am thoughtful on how quickly rights can be taken away or reshaped. Women’s Equality Day can remind us what is at stake for all genders to join together in protecting and expanding gender equity for all.”

“Equality is not having a seat ‘at the table.’ Equality means being given the space, the tools, the resources, and the support to build my own table, to shape and to refine it, to paint it a bold shade or no shade, to stencil it or to adorn it with graffiti, to strip it bare—splinters and chipped paint everywhere—to grow, to change, to adapt, to express unapologetically.

“Equality means teaching and encouraging others to build their own tables. So that no matter where they go, there is always a place for them to sit and to just…be. No invitation required.”

“As an African-American woman, there is a difference to me between how equality should look and how it is played out in our world today. In a perfect world, I would like to see equality include equal pay across genders and a decrease in microaggressions toward people who ‘look’ different than the majority. I would like to see everyone being accepted based on their experience and education—not by their appearance or any one else’s assumptions.”

Co-dean and the Tom J.E. and Bette Lou Walker Professor of Law
School of Law

“I joined CWRU in 1985 and shortly thereafter I submitted my first [National Science Foundation] proposal on modeling mixing processes. I was shocked to read one of the reviewers’ comments stating ‘the PI should better do experiments using a Kitchenaid than spending valuable tax payers’ money.’ Over the years I saw many changes in government agencies and academic institutions’ approaches on encouraging and supporting women in STEM and I hope this trend will continue in perpetuity. With regard to academia, I believe equality is the certainty that one’s gender will never be used against them to limit what they’re able to accomplish.”

“Equality is a living dream that struggles to be a reality and strives to be a virtue. It means unconditional consideration of and respect for the full spectrum of humanity—not just for some individuals, but for all people, regardless of gender, color, nationality or zip code. When we provide people with the same access to resources, opportunities and experiences to do their work and live their lives, we uplift them, allow them to thrive not just survive and unleash hope. With regard to the voting rights that courageous, visionary women secured 102 years ago, we all have a responsibility to pay it forward to future generations by participating in all elections and ensuring everyone has equal access to do the same.”

“[Equality is] when women’s voices are valued equally with those of men—but that may be too simplistic an answer. Certainly much has changed over the past 25, 50, 75 years regarding gender roles and the essential work of childcare, family caregiving and household management, but how these get worked out in any particular relationship is complex. Women now make up the majority of students in colleges and medical and law schools, and roughly equal numbers of women and men faculty start on the tenure track, but very few women make it to full professor.

Stereotypes about gender roles persist—just ask a woman engineer managing a production facility with mostly male workers. There is greater awareness of and reflection about gender inequity, and both structural initiatives and individual efforts to reduce the inequities are essential. Many men are truly supportive of women and their rights, and are providing opportunities for women to succeed and excel. But, there is more work to be done.”

Lecturer, Department of History
College of Arts and Sciences

“The 19th Amendment at the time did not ensure access to all women to the vote, but its ratification was a big boost in the continuing struggle for voting rights for all people. It has sparked a movement to expand these rights beyond voting, and to create a society in which equal rights and gender equality are part of our constitution. With the recent attacks we see on bodily autonomy, reproductive rights, and the meaning of citizenship and democracy, we need to ignite those efforts to pass the Equal Rights Amendment that would guarantee equality for all. The long history of fighting for equality can inform us today as we fight for a better future in which all people will be equal.”

“We have made great strides since 1920, when women were guaranteed the right to vote. And yet, there is still much ground to cover, and much ground to regain. Following the legacy of Elizabeth Blackwell, the first woman medical student graduate in 1849, women since 2017 comprise the majority of first-year medical students. We must all do our part to advance not only diversity, but importantly, equity and inclusion. Supported by the [Association of American Medical Colleges’] Gender Equity Statement, gender equality in medicine is at the forefront of academic medicine’s goal to dismantle inequities that persist in women leadership, compensation, research, and recognition. In healthcare, we are called to advance the health of all, and for women, this includes their reproductive rights, and the racial inequities that compound Black women’s high maternal mortality.”

“Equality to me is the spirit and everyday action of genuinely valuing the identities, contributions, rights, and roles of all people in our society. It is about ensuring equal access to resources and developing systems and structures that do not create barriers for any individual for any reason. I believe we need to not just talk about equality, we need to notice, practice, and challenge the barriers every day. I can only imagine the global shift if we all made a commitment to creating and ensuring equality for all humans.”