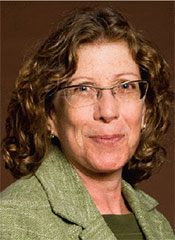 Case Western Reserve University researchers discovered that a protein previously implicated in disease plays such a positive role in learning and memory that it may someday contribute to cures of cognitive impairments. The findings regarding the potential virtues of fatty acid binding protein 5 (FABP5)—usually associated with cancer and psoriasis—appeared in a recent edition of The Journal of Biological Chemistry.

“Overall, our data shows that FABP5 enhances cognitive function and that FABP5 deficiency impairs learning and memory functions in the brain hippocampus region,” said senior author Noa Noy, a professor of pharmacology at the School of Medicine. “We believe if we could find a way to up-regulate the expression of FABP5 in the brain, we might have a therapeutic handle on cognitive dysfunction or memory impairment in some human diseases.”

FABP5 resides in many tissues and is especially highly expressed in the brain. Noy and her Case Western Reserve School of Medicine and National Institute on Alcohol Abuse and Alcoholism colleagues particularly wanted to understand how this protein functioned in neurons. They performed imaging studies comparing the activation of a key transcription factor in the brain tissue of normal mice and in FABP5-deficient mice. (Transcription factor is a protein that controls the flow of genetic information).

“FABP5 improves learning and memory both because it delivers endocannabinoids to cellular machinery that breaks them down and because it shuttles compounds to a transcription factor that increases the expression of cognition-associated genes,” Noy said.

Even though endocannabinoids affect essential physiological processes from appetite to memory, the “cannabinoid” part of the word signifies that these natural biological compounds act similarly to drugs such as marijuana and hashish. Too much endocannabinoid can lead to impaired learning and memory.

In simple terms, FABP5 transports endocannabinoids for processing. FABP5 functions like a bus and carries the brain’s endocannabinoids and their biological products to two stations within the neuron cell. FABP5 captures endocannabinoids entering the neuron and delivers them to an enzyme that degrades them (station 1). Then, that degraded product is picked up by the same protein (FABP5) and shuttled to the cell nucleus—specifically, to a transcription factor within it (station 2). Binding of the degraded product activates the transcription factor and allows it to induce expression of multiple genes. The genes that are induced in this case tell the cells to take steps that promote learning and memory.

Noy and associates also compared memory and learning in FABP5-deficient mice and in normal ones. In one test, both sets of mice repeatedly swam in mazes that had a platform in one established location where they could climb out of the water. During subsequent swims, the wild-type mice reached the platform quickly because they had learned—and remembered—its location. Their FABP5-deficient counterparts took much longer, typically finding the platform’s location by chance.

“In addition to regulating cell growth as in skin and in cancer cells, for example, FABP5 also plays a key role in neurons of the brain,” Noy said. “FABP5 controls the biological actions of small compounds that affect memory and learning and that activate a transcription factor, which regulates neuronal function.”

Funding for this project came from the National Institutes of Health (DK060684).