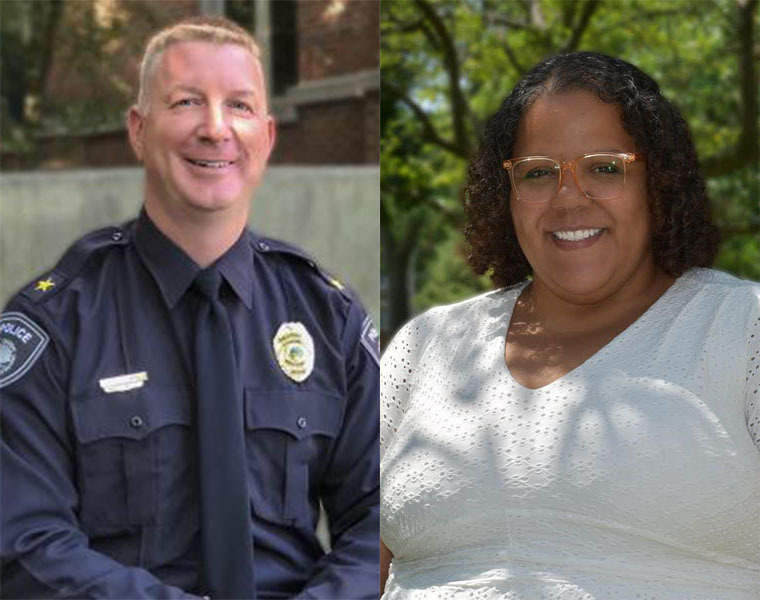 Megan Koeth, who joined the university in 2018, is now the university’s executive director of public safety, and Paul Owens, who started as a CWRU security officer 18 years ago, is the department’s chief of police.

Poulos, who named the two to their temporary positions in February, said he had high hopes for the pair based on their performance in previous roles.

“Each of them far exceeded even my greatest expectations,” Poulos said. “Megan and Paul embraced this opportunity with immense energy, creativity and dedication, and their teams responded quickly and positively to their leadership.”

Before administering the oath of office to Owens Thursday, President Eric W. Kaler praised the new chief’s long record of leadership and engagement on campus.

“Paul has worked hard to build meaningful relationships not only with our students, but also with our neighbors and broader community,” President Kaler said. “We couldn’t be more pleased that you’ll lead our police department.”

Koeth, who holds master’s degrees in public administration and homeland security in public health, previously served as a disaster response manager for the Greater Cleveland chapter of the American Red Cross. Over the course of the pandemic, she played a central role in coordinating logistics and planning for COVID-19 testing and vaccinations on campus, as well as local outreach, education and vaccination efforts.

“Again and again, Megan has demonstrated a remarkable ability to anticipate and prepare for potential challenges,” Poulos said, “and at the same time inspire others to contribute and excel well beyond expectations. I look forward to seeing the many ways that she and Paul lift the division and department to new heights.”