As 3,000 leaders gathered in Switzerland for the World Economic Forum’s 47th annual meeting this week, the team from Case Western Reserve’s Interactive Commons was ready for its Davos debut.

The renowned gathering of company CEOs, national government officials, scholars, journalists and more features 400 sessions spread over four days. But the Interactive Commons team was presenting all day, every day, with demonstrations of educational applications of Microsoft’s mixed-reality technology.

Their exhibit, Immersive Learning with Holograms, sits on the Middle Level of the Congress Centre Davos, welcoming participants eager to experience Microsoft HoloLens for themselves.

“We have done so many demonstrations over the past year or so, and every time the response is the same,” said Professor Mark Griswold, Case Western Reserve’s faculty lead for the university’s collaboration with Cleveland Clinic and Microsoft. “No matter how effusive or detailed someone else’s description may be, people can’t appreciate the transformative nature of this technology until they actually put it on.”

Case Western Reserve and Cleveland Clinic first began exploring the possibility of collaborating with Microsoft in 2014. The engagement related to the institutions’ efforts to include the most advanced technology possible in their joint Health Education Campus (HEC), a 485,000-square-foot building now under construction. Scheduled to open in the summer of 2019, the space will welcome dental, nursing and medical students in a setting that Foster + Partners architects specifically designed to encourage interprofessional learning. A three-dimensional version of the campus is highlighted on one of the walls of the Davos exhibit. 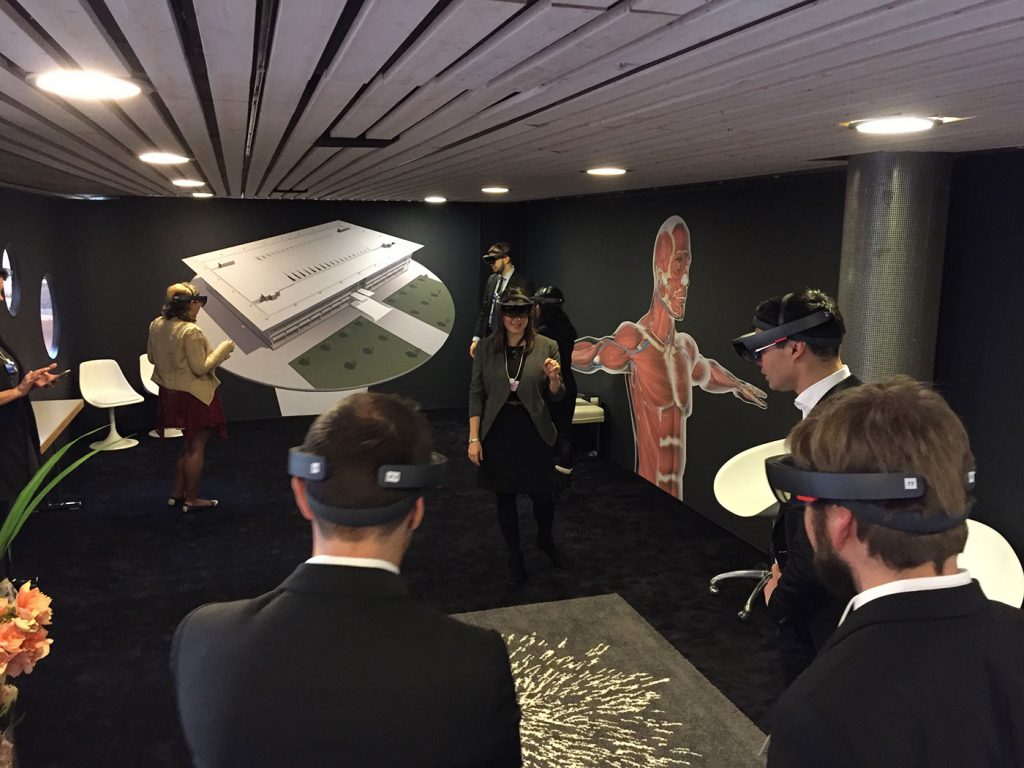 The first priority for Griswold and his team is to develop a holographic anatomy curriculum for medical students to use when they begin classes at the HEC. By teaching using holograms, faculty give students the opportunity to see different organs both separately and in the context of the body, as well as virtually dissect to see interiors without compromising the outside of the organ. Perhaps most exciting, the holograms could be programmed to have specific diseases, and even to move to demonstrate function—as with a beating heart.

In a pilot test of the cardio-thoracic region last fall, 85 percent of the medical students—who already had studied this area of the body on cadavers still reported learning something new through the HoloLens experience.

The Interactive Commons team sees many other potential educational applications of Microsoft HoloLens, from visualizing molecules and galaxies to seeing historic places or artwork as they once were. The team highlighted some of these other applications as part of the mixed-reality experience for visitors at the World Economic Forum exhibit.

Also attending the World Economic Forum was Cleveland Clinic President and CEO Toby Cosgrove, who was among the very first people outside Microsoft to don a HoloLens visor when he and Case Western Reserve President Barbara R. Snyder visited Microsoft’s Redmond, Washington, headquarters two years ago. He was in Davos as a discussion leader for a Wednesday forum regarding future developments in prevention and treatment of cancer, and also visited the exhibit while there.