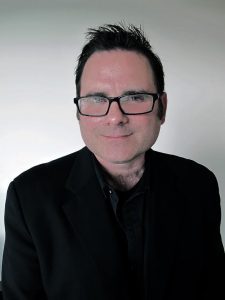 What he found, through 430 hours of prison observations and interviews, is that inmates were treated humanely and security was better managed when cellblock officers were trained to identify symptoms of mental illness and how to respond to them.

In the 150-year-old prison, he discovered officers used their authority with flexibility and discretion within the rigid prison structure to deal with mentally ill inmates.

Galanek’s observations and interviews with 23 staff members and 20 inmates with severe mental illness, are described in the Medical Anthropology Quarterly article, “Correctional Officers and the Incarcerated Mentally Ill: Responses to Psychiatric Illness in Prison.” The National Science Foundation and the National Institute of Mental Health supported his research.

“With this research, I hope to establish that prisons, with appropriate policies and staff training, can address the mental health needs of prisoners with severe mental illness,” said Galanek, a medical anthropologist and research associate at the Jack, Joseph and Morton Mandel School of Applied Social Sciences’ Begun Center for Violence Education and Prevention Research.

“Additionally,” he said, “I show that supporting the mental health needs of inmates with severe mental illness concurrently supports the safety and security of prisons, and that these two missions are not mutually exclusive. With the number of prisoners with severe mental illness in prison increasing, efforts need to be made by all prison staff to ensure that this segment of the prison population has appropriate mental health care and safety.”

Galanek saw how administrative policies and cultural values at the prison allowed positive relationships to develop between officers and prisoners diagnosed with severe mental illnesses, among the prison’s 2,000 inmates. 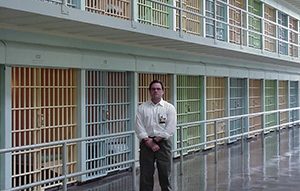 Galanek in the prison where he did his research

In this maximum-security prison, left unidentified for the study to protect the confidentiality of officers and inmates, officers received training to identify symptoms of mental illness, which, in turn, led to better security, safety and humane treatment of potentially volatile inmates. But the officers were also able to use their discretion in handling some situations.

Galanek observed, for example, the following instances where an officer’s decision—rather than rigidly enforcing prison rules—helped mentally ill inmates and maintain order within the institution:

Conversely, Galanek said, if these inmates were sent to the segregation unit (“the hole”) to sit isolated for hours, their thoughts could lead to agitation and hallucinations that often bring on prison security problems. Mentally ill prisoners’ work was important and meaningful because it acted as a coping mechanism to decrease the impact of psychiatric symptoms, he said.

To gain such access to prison culture is highly unusual. In fact, such ethnographic studies have declined in past 30 years due to perceptions that researchers are seen as security risks within these highly controlled environments. But as a mental health specialist in Oregon’s Department of Corrections from 1996-2003, Galanek was uniquely prepared to navigate the prison for his research.

“They trusted me,” he said. “I knew how to move, talk and interact with staff and inmates in the prison.”