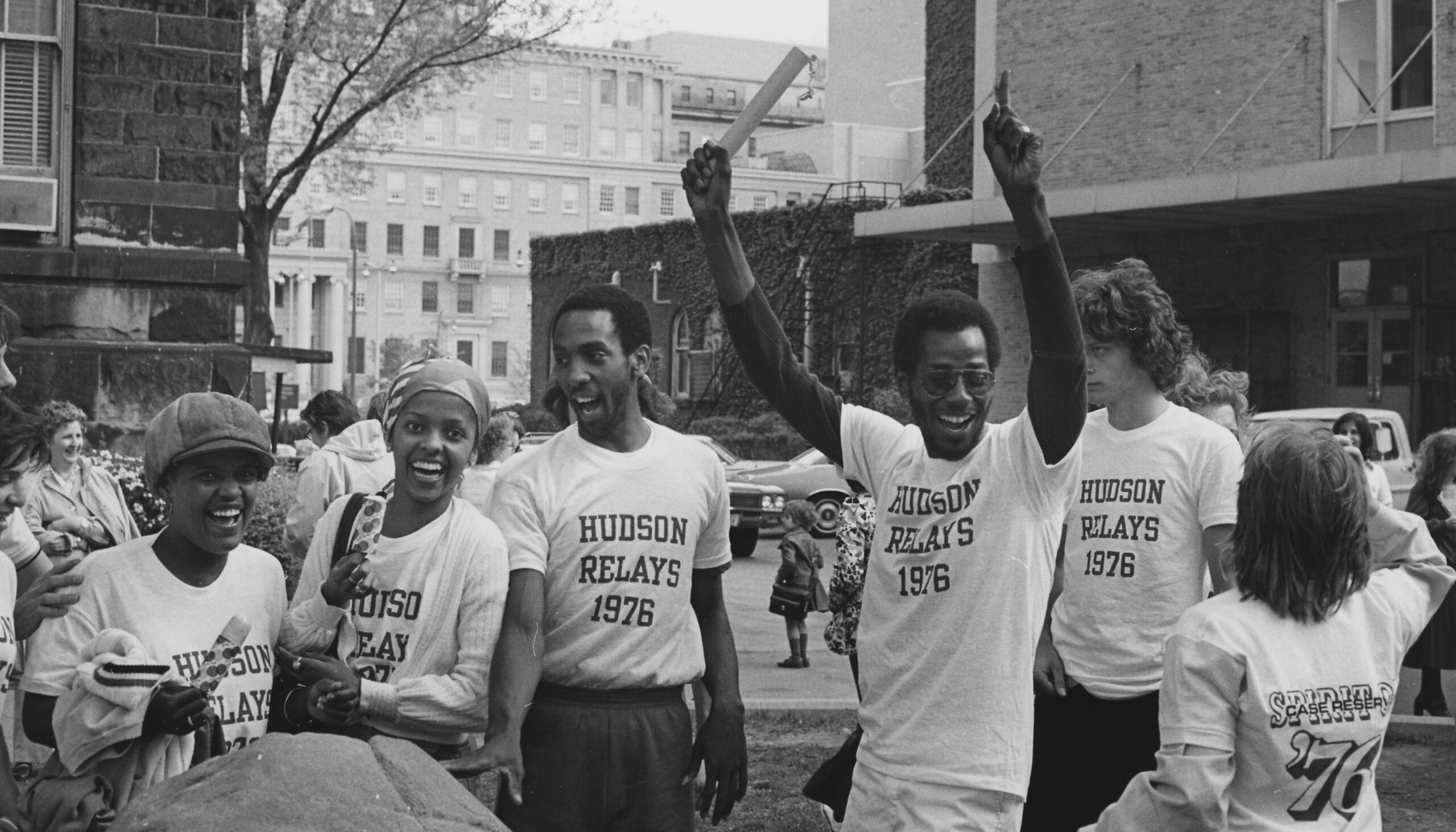 A group of participants celebrate at the Hudson Relay finish line in 1976. 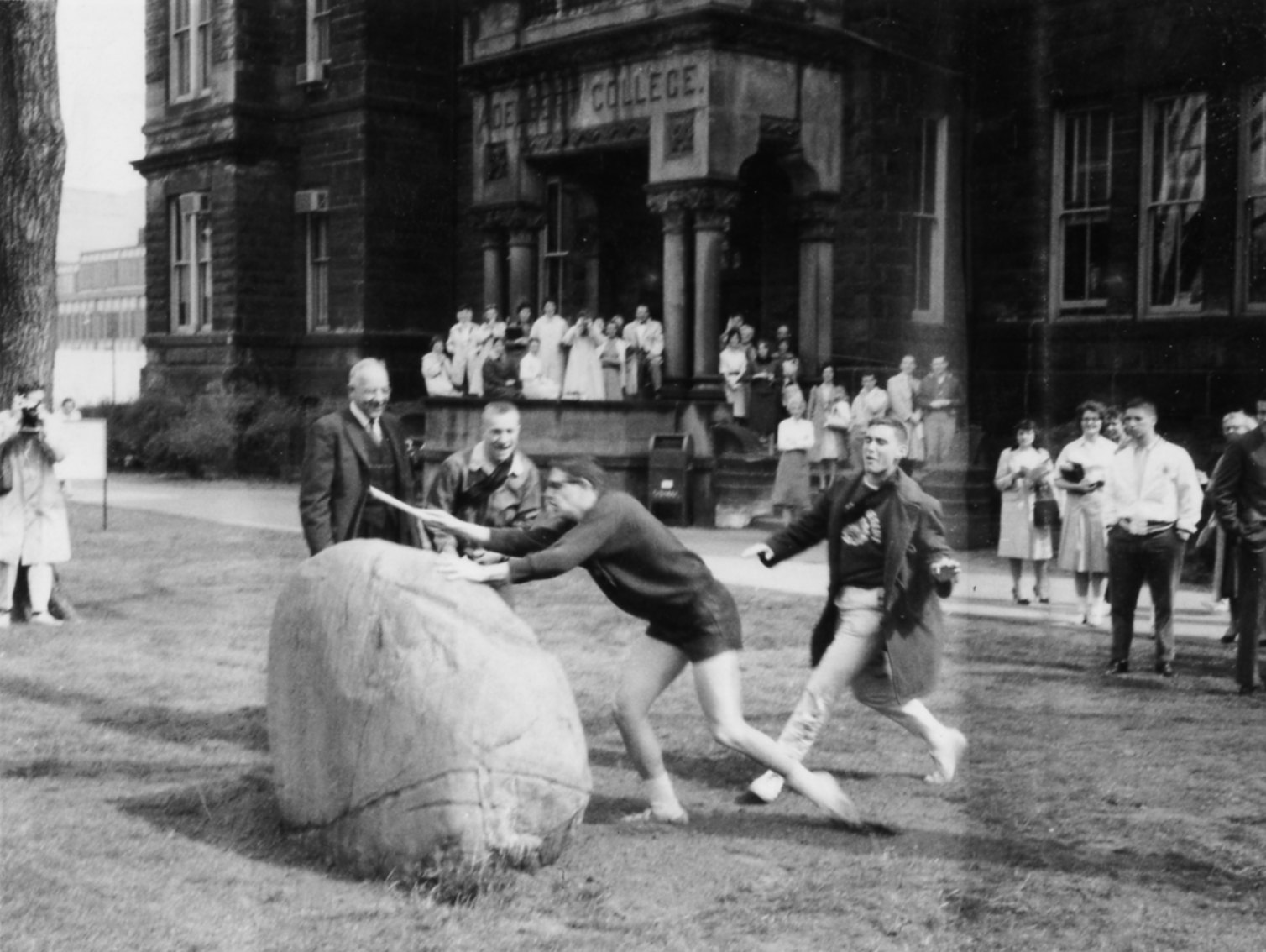 A runner reaches the finish line at the 1971 Hudson Relays. 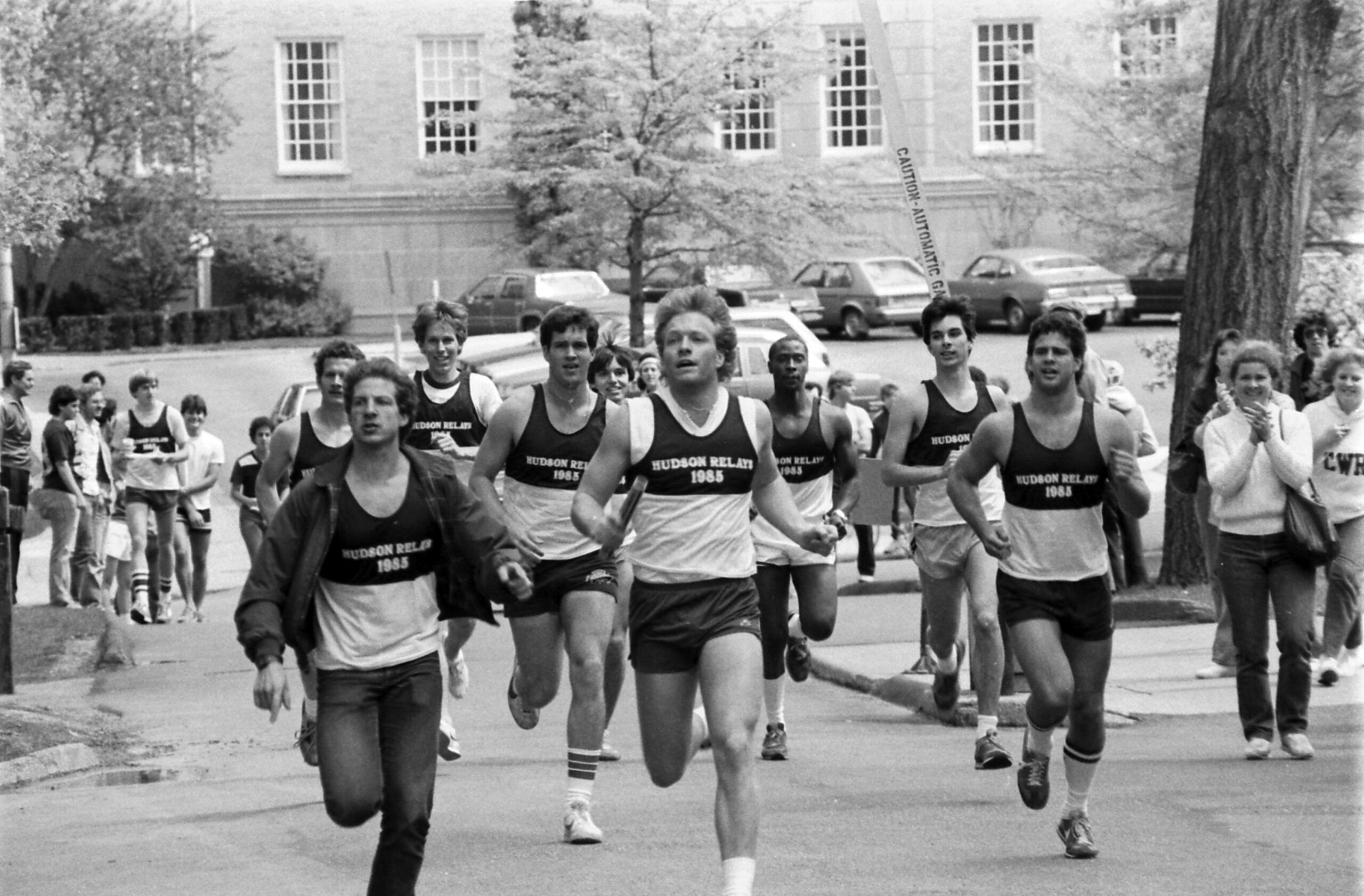 A group of Hudson Relay winners race to the finish line in 1985. 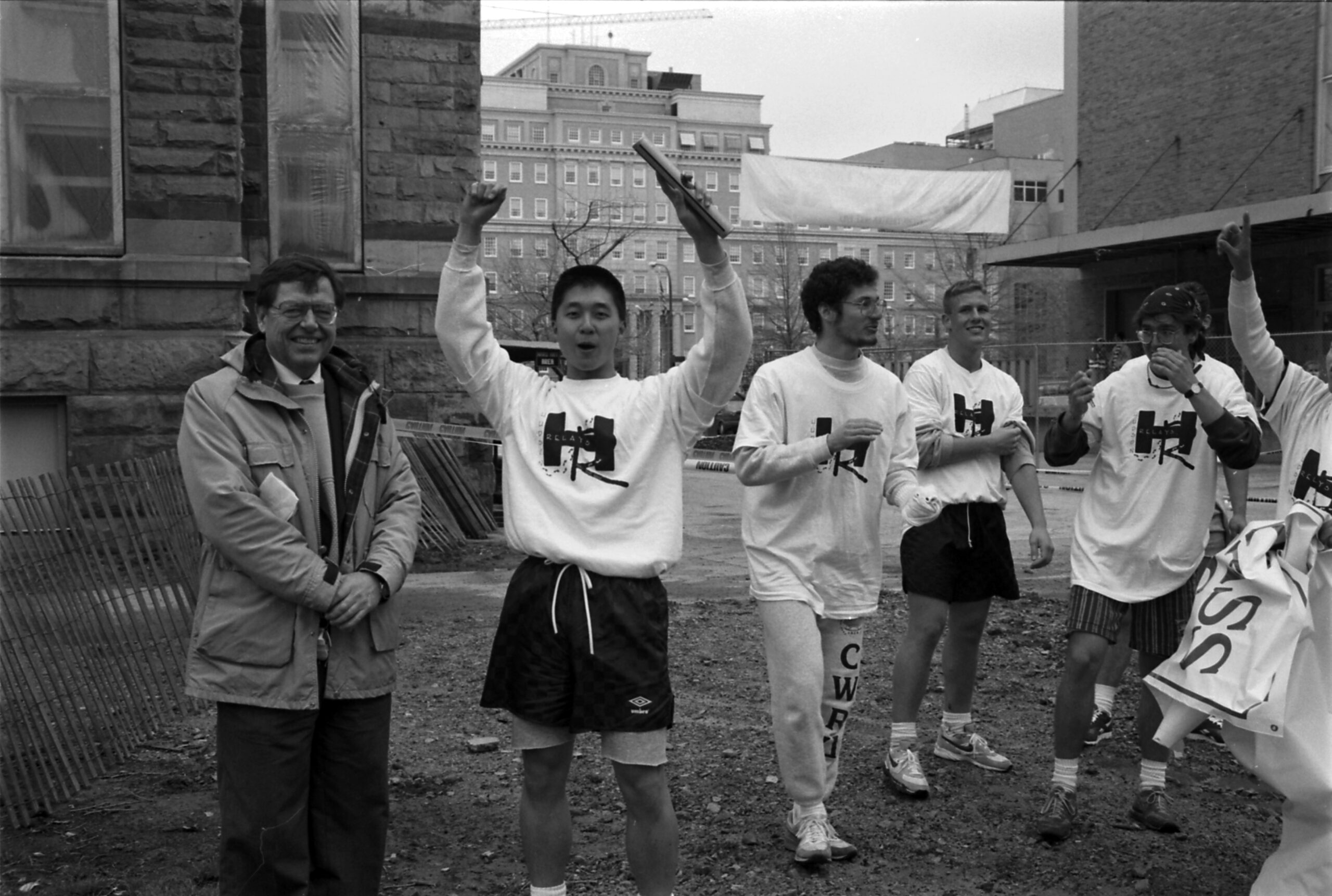 President Pytte poses with a cheerful group of Hudson Relay runners in 1992. 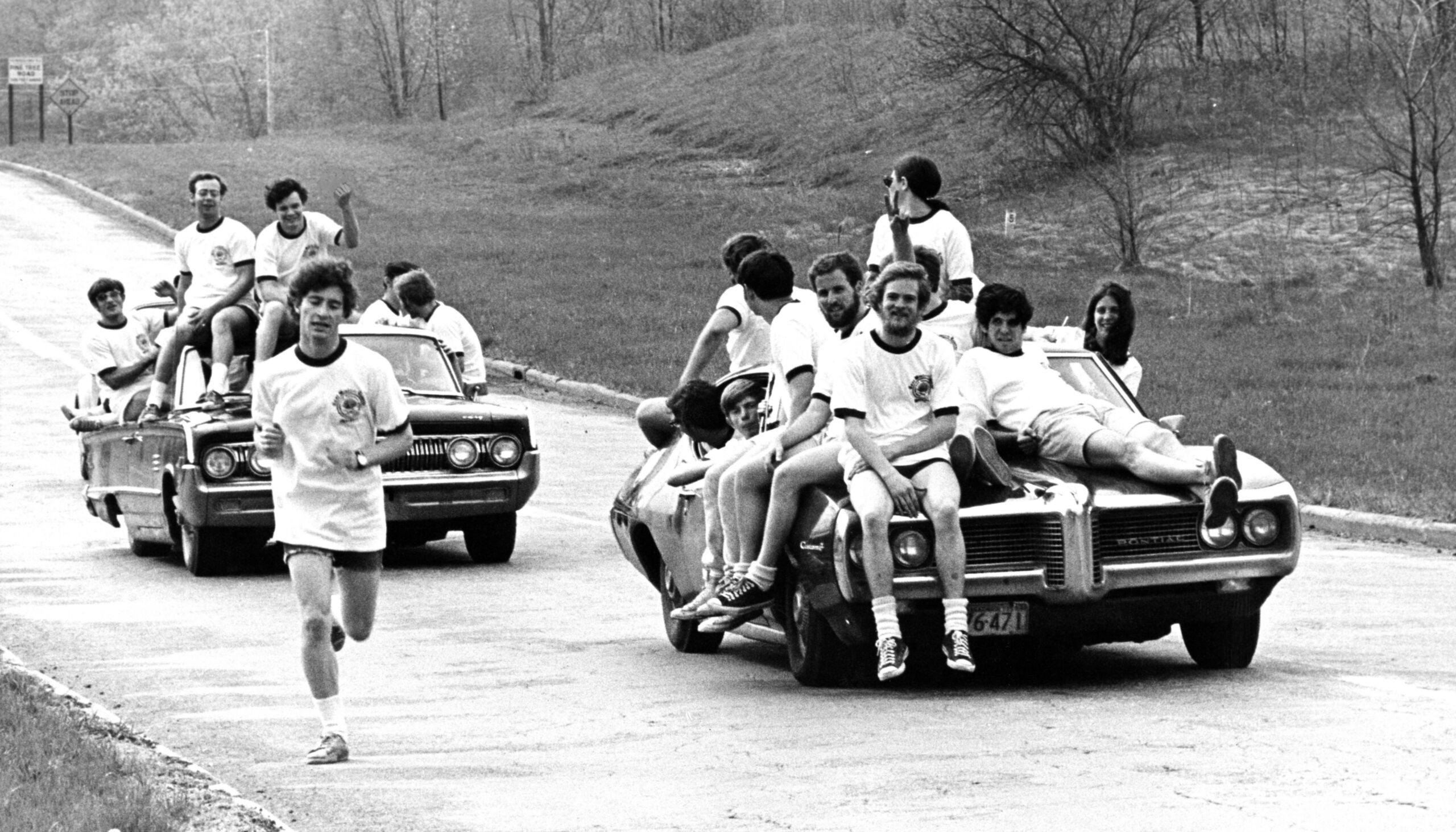 A group of attendees follow a participant as he runs at the Hudson Relay in 1971.

Two men begin their leg of the Hudson Relays at the 1911 event.

A crowd gathers at the Hudson Relays finish line in 1974.

A Hudson Relays runner dashes through a crowd at the 1913 event.

The pep band participates at the 1974 Hudson Relays from the back of a pickup truck.

A Hudson Relays runner runs past the Western Reserve University band in 1937.

The Daily has partnered with University Archives to shed light on Case Western Reserve University’s history each month. Follow The Daily to get your fill, and check out Digital Case to find even more information.

In 1910, Monroe Curtis (ADL 1911) initiated a Case Western Reserve University tradition that would leave a track record for over 110 years: The Hudson Relays.

Intended by Curtis to “fill in the hitherto blank observance of the Undergraduate Day of Commencement Week,” the Hudson Relays began as an Adelbert College activity, aptly named as the chosen race route stretched from Hudson to Cleveland. The route was initially suggested by planning committee member Quay Findley (ADL’ 1911) and was accepted with minor variations until 1990.

The first Hudson Relays took place June 13, 1910, and each of the graduating classes from Adelbert College participated in teams of 24-52. The overall length of the relay was 26 miles until 2003, when it changed to pass through the North Residential Village on campus, shortening the distance to 24.5 miles.

Early rules required each runner to finish a maximum of one mile unassisted. It was the custom for elected team captains to run the first mile, with the class president completing the final lap. During the first relay, two senior class runners of the Class of 1910 got lost, and their replacements were transported by car to their starting points. As a result, the team was disqualified for cheating, and the Class of 1912 won with a 2 hour and 1 minute completion time. In 1914, alumni began participating in the relay to prevent similar occurrences; however, in 1946, all teams were disqualified for using cars instead of running the race.

Participation in the relay eventually extended to include students from Mather College, the undergraduate women’s college, and Mather College became the first school other than Adelbert College to assemble a team in 1972. It wasn’t until 1975 that women were allowed to run with their class instead of as a separate women’s team. By 1984, students of the Case Institute of Technology and the School of Law could also compete.

Throughout its history, the Hudson Relays have established many traditions. One initial custom involved carrying a message from the Mayor of the Village of Hudson to the Western Reserve University president, while later traditions included spaghetti dinners the night before the race, picnics and receptions. Past winning teams have won various prizes—from class year engravings on the Hudson Relay boulder to the Monroe Curtis Cup trophy created by President Toepfer in 1972.

The relays were one of several CWRU Campus Day events from the 1920s through the 1950s, though they’ve taken place in some fashion or other each year with very few exceptions since 1910.

This year, the tradition continues on Saturday, April 23, as six teams—composed of all four graduating classes, alumni and graduate students—compete for the title of the 2022 Hudson Relay winners. This year’s race will be the first since 2019 to take place in the event’s full format after variations the past several years relating to the COVID-19 pandemic.

Find out who will go the distance at the 2022 Hudson Relays. Then, take a look at more photos from the Hudson Relays over the years.