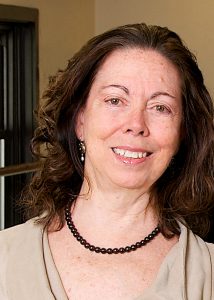 Karen Potter, chair of the Department of Dance in the College of Arts and Sciences, read the message five times before she realized it was a fact: She won a John S. Diekhoff Award for Mentoring.

“It’s an honor to be nominated, but I never expected to win,” said the dancer, choreographer and teacher, who joined the faculty to lead the dance program 16 years ago. She became the first chair of the newly created dance department in 2011 when theater and dance became separate departments.

This was Potter’s second nomination for the Diekhoff Award, which was created in 1978 to recognize full-time faculty members who make exemplary contributions to the education and development of graduate students at Case Western Reserve University. She will receive her honor during commencement on Sunday, May 17.

Potter also has been nominated for the Carl F. Wittke Award for undergraduate teaching, and three times for the J. Bruce Jackson Award for Mentoring.

Potter is there for her students in and out of the classroom, whether it’s lending them furniture or giving directions to neighborhood grocery stores, or advising on career decisions such as whether to jump on the opportunity to join a major New York dance company.

“She is willing to help students with any kinds of issues, including students’ needs in life and in school work,” wrote the student nominator.

“I care about each student in the program,” Potter said.

Dance students explained to the award selection committee how Potter keeps her office door open to students, whether they’re struggling with a class or a professional decision—and also how she approaches students she suspects may be struggling, even if they don’t seek her help.

One student described how Potter took time on a Sunday afternoon to find out why she was upset.

The student was assigned to write a review of a ballet she had seen, but wasn’t as familiar with ballet as she was with hip-hop. Potter began asking the student questions and had her write down the answers. The professor then pointed out that the student had all the information she needed right there to write the review—and she did.

Potter said she learned what it means to be such an attentive and personable mentor from those she had in college in Texas, where she grew up—and after that, she made herself a promise to become that kind of person for her students.

Potter, who began taking dance classes at age 3, eventually became intrigued by the idea of teaching dance in college. But, in the 1970s, few universities offered degrees in dance.

After a dance teacher in the physical education department at Southwest Texas State University gave Potter advice on where she could earn a degree that would allow her to teach dance in college, she transferred to Sam Houston State University (SHSU) to earn a dance degree in 1971 and her Master of Arts in 1973. She earned her Master of Fine Arts at Case Western Reserve in 1989.

Wilson Barilleaux, her mentor at SHSU, suggested Potter audition for the esteemed Martha Graham Dance Co. in New York City. But before accepting an offer from a major New York dance company, she chose instead to teach at SUNY Courtland and SHSU. She also formed the Back Roads Dance Co., which performed at venues like the Shakespeare Festival in Stratford.

“I was from Texas and didn’t have the confidence,” she said.

But a few years later, with more professional experience, Potter finally earned her way to the stage as a member of New York City’s prestigious Erick Hawkins Dance Co.

As her talented students face similar life choices, she advises them to make a list of options, weighing the pros and cons of each.

“It’s a Robert Frost fork in the road,” Potter said, referring to the poet’s classic The Road Not Taken. “Whatever path the student takes, it’s a new direction and adventure. And neither path is the wrong; it is just different.”