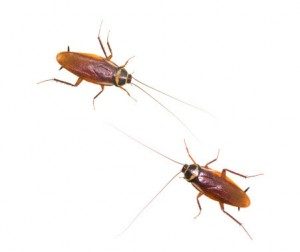 An insect’s internal chemicals can be converted to electricity, potentially providing power for sensors, recording devices or to control the bug, a group of researchers at Case Western Reserve University report.

The finding is yet another in a growing list from universities across the country that could bring the creation of insect cyborgs—touted as possible first responders to super spies—out of science fiction and into reality. In this case, the power supply, while small, doesn’t rely on movement, light or batteries, just normal feeding.

The work is published in the online Journal of the American Chemical Society.

“It is virtually impossible to start from scratch and make something that works like an insect,” said Daniel Scherson, chemistry professor at Case Western Reserve and senior author of the paper.

“Using an insect is likely to prove far easier,” Scherson said. “For that, you need electrical energy to power sensors or to excite the neurons to make the insect do as you want, by generating enough power out of the insect itself.”

The key to converting the chemical energy is using enzymes in series at the anode.

The first enzyme breaks the sugar, trehalose, which a cockroach constantly produces from its food, into two simpler sugars, called monosaccharides. The second enzyme oxidizes the monosaccharides, releasing electrons.

The current flows as electrons are drawn to the cathode, where oxygen from air takes up the electrons and is reduced to water.

After testing the system using trehalose solutions, prototype electrodes were inserted in a blood sinus in the abdomen of a female cockroach, away from critical internal organs.

“Insects have an open circulatory system so the blood is not under much pressure,” Ritzmann explained. “So unlike, say, a vertebrate, where if you pushed a probe into a vein or worse an artery (which is very high pressure) blood does not come out at any pressure. So, basically, this is really pretty benign. In fact, it is not unusual for the insect to right itself and walk or run away afterward.”

The researchers found the cockroaches suffered no long-term damage, which bodes well for long-term use.

The study was five years in the making. Progress stalled for nearly a year due to difficulties with trehalase—the first enzyme used in the series.

Lee suggested they have the trehalase gene chemically synthesized to generate an expression plasmid, which is a DNA molecule separate from chromosomal DNA, to allow the production of large quantities of purified enzyme from Escherichia coli.

“Michelle then began collecting enzyme that proved to have much higher specific activities than those obtained from commercial sources,” Lee said. “The new enzyme led to success.”

The researchers are now taking several steps to move the technology forward: miniaturizing the fuel cell so that it can be fully implanted and allow an insect to run or fly normally; investigating materials that may last long inside of an insect; working with other researchers to build a signal transmitter that can run on little energy; and adding a lightweight rechargeable battery.

“It’s possible the system could be used intermittently,” Scherson said. “An insect equipped with a sensor could measure the amount of noxious gas in a room, broadcast the finding, shut down and recharge for an hour, then take a new measurement and broadcast again.”

The research was funded in part by the National Science Foundation.