Psoriasis is well known for causing too many skin cells on elbows, knees and across the body, but people living with psoriasis may also be at an increased risk of heart disease. Effects of overactive immune cells in the skin can spread system-wide and inflame arteries, causing heart attacks and strokes.

Treatment of psoriasis and its deadly comorbidities costs an estimated $135 billion annually in the United States, and up to $26,000 per patient, according to the National Psoriasis Foundation. For the 1 in 50 people worldwide living with psoriasis, there is an urgent need to understand how painful, thickened skin can lead to such fatal complications. 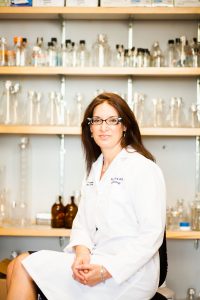 Nicole Ward, a leading dermatology researcher at Case Western Reserve University School of Medicine, is corresponding author on two recent studies that describe how the inflammatory response to psoriasis can alter levels of several immune system molecules, ultimately increasing a person’s risk of thrombosis, which can include fatal blood clots.

The studies intersect at a particular molecule called interleukin 6, or IL-6. Psoriasis patients have high levels of IL-6 in their skin, and researchers thought it might be causing the disease or its cardiovascular comorbidities. Patients with congestive heart failure also have high blood levels of IL-6. The molecule is known for triggering overactive immune responses in the skin, like the one that causes overproduction of skin cells during psoriasis.

“We wanted to pursue the mechanisms by which skin inflammation contributes to cardiovascular disease,” said Ward, an associate professor of dermatology. “In multiple mouse models, we showed removing IL-6 reduced cardiovascular risk, but did not get rid of psoriasis unless combined with other interventions.”

In psoriasis clinical trials, blocking IL-6 hasn’t been successful. Trial results show IL-6 inhibitors don’t reliably improve skin, and can even cause spontaneous psoriasis in people who didn’t have it before. “Eliminating this one molecule just isn’t good enough,” Ward said.

In a recent study published in the Journal of Clinical Investigation Insight, Ward turned her attention to a protein called MRP14, which has been used to predict heart attack risk in certain populations.

But in science, negative results are still results. The researchers looked for mechanisms that could explain the findings. The MRP14-deficient psoriasis mice still had lots of IL-6 in their skin, plus two other pro-inflammatory molecules, called IL-23 and IL-17. Ward hypothesized that IL-23 and IL-17 could be part of a “workaround” mechanism in the mice that compensated for a lack of MRP14 and sustained skin inflammation.

“IL-23 and IL-17 are the targets for all the newest psoriasis drugs,” said Ward. The two molecules have emerged as critical mediators of autoimmunity, and can be leveraged to improve psoriasis skin.

When the researchers blocked these molecules in their genetically modified mice, skin inflammation and thrombosis disappeared. Not only that, IL-6 in the skin went down.

“We discovered that blocking IL-23/IL-17 decreased skin-derived IL-6 in MRP14-deficient psoriasis mice and reversed the thrombosis,” Ward said. But the researchers had decreased IL-6 indirectly, and wanted to see what happened to psoriasis mice when they eliminated IL-6 directly, not via other molecules.

“There aren’t straightforward approaches available to block IL-6 in mouse models,” said Ward. “So we spent months genetically engineering our psoriasis mice to lack the gene encoding IL-6.” Using her newly created IL-6-deficient psoriasis animals, she was able to demonstrate that the thrombosis was gone. However, the mice still had psoriasis skin inflammation.

In addition to Ward, 13 researchers from Case Western Reserve and the University of Michigan contributed to the study.

In a second study, published in the Journal of Investigative Dermatology, Ward identified several immune system molecules impacted by the genetic deletion of IL-6 in her psoriasis mice.

“We were surprised to see compensatory increases in other pro-inflammatory molecules that we know are critically involved in sustaining skin inflammation,” Ward said. “It is possible that these factors also increase in psoriasis patient skin and explain why they do not respond clinically to IL-6 blockade.”

Similar to her other experiments, the immune system had used a compensatory mechanism to sustain psoriasis-like skin inflammation in mice without IL-6. The IL-6-deficient mice still had psoriasis, just like the patients in the clinical trials.

The team had successfully separated psoriasis and cardiovascular disease outcomes. Ward concluded that while blocking IL-6 may not prevent psoriasis on its own, its levels are central to thrombosis events triggered by skin inflammation. The findings also may help explain how alternative immune system molecules could circumvent certain psoriasis treatments.

Including Ward, 15 researchers worked on this study, with nine from Case Western Reserve and six from the University of Michigan.

“Not everything works all the time in science,” said Ward. “You have to dig deep and find something interesting from the experiments that don’t work out the way you want them to.”

The next step for the researchers will be to determine how IL-6 interacts with blood and vessel wall components related to thrombosis. Together, the studies could pave the way for new treatments to lower the risk of heart disease in people living with psoriasis.