New research could explain color variance in other species and predict survival, reproduction in warming climate for other animals

New research from Case Western Reserve University in how dragonflies may adapt their wing color to temperature differences might explain color variation in other animals, from lions to birds.

Further, the findings could also provide evolutionary biologists clues about whether rising global temperatures might adversely affect some species.

Michael Moore, a graduate biology student, and Ryan Martin, an assistant professor of biology, recently published their findings in the journal Ecology Letters. 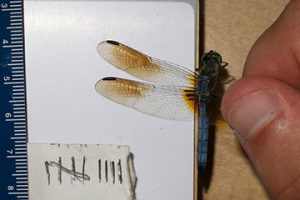 One of the male blue dasher dragonflies with darker wings.

“People have long been aware of variation in dragonfly wing color, but what we are showing in this new work is an overlooked environmental factor—how temperature affects coloration,” Martin said. “This could turn out to also determine some of the really cool extravagant traits we like to look at, such as coloration in birds.”

Their findings follow a two-year study that began with a hunch about how the wing color on male Blue Dasher dragonflies in the western United States was different from their counterparts in Northeast Ohio.

They reviewed vast amounts of dragonfly photographs compiled by citizen scientists on the website iNaturalist.org and then, with the help of graduate student Iulian Gherghel, cross-referenced that information with weather data.

“I went through 600 pictures from the couch to begin this research,” said Moore with a laugh.  “After that, it was just mapping it with the corresponding environmental and weather data. It turns out that males in the hottest parts of North America have way less colorful wings, and we wanted to know why. ” 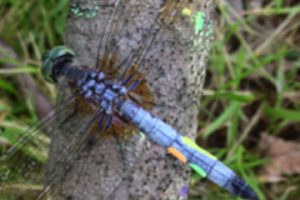 A male dragonfly whose body was marked by researchers.

Dragonfly weightlifting and other experiments

But the research really took off in the summer of 2017 at the Case Western Reserve farm in Hunting Valley, Ohio, as Moore and Hathaway Brown high-school student Cassandra Lis chased down male dragonflies as they fought to defend their respective territories surrounding a pond.

Across a series of experiments, they then marked each male’s body with a series of colors for individual identification at the pond, colored some of their wings with a dark marker, and put the different groups through a weightlifting test to measure their strength.

The conclusion: The dragonflies with darker wings absorbed more heat from the sun, much like humans do when wearing a dark shirt on a sunny day. That simple act caused the muscles of those cold-blooded dragonflies to warm more quickly, grow stronger and more successfully defend their territory or win females.

Findings may extend to other species 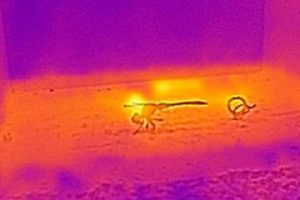 An image taken with a thermal camera shows how the male blue dasher dragonfly’s body warms due to the heat absorption of its darker wings.

“Further tests, however, showed that, when temperatures were too hot, darker wings caused the dragonflies to overheat and fly poorly,” Moore said.

“These findings suggest that this poor flight would then cause those overheated males to lose the territorial battles and their mates, which in turn could be why males in the warmest parts of North America have adapted to produce less colorful wings.”

The study’s three main conclusions were: