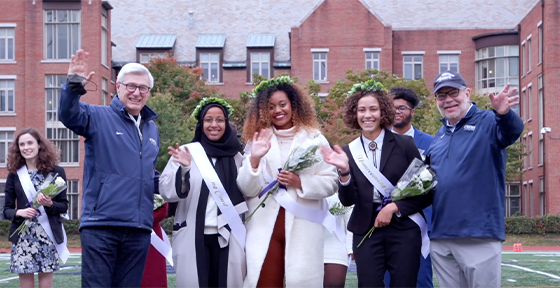 Case Western Reserve University celebrated its return to an in-person homecoming with a long-awaited ceremony for the Class of 2020, a well-fought football victory, and the sequel to a $20 million challenge gift first made in 2018.

Nearly a year and a half after COVID-19 forced their commencement ceremonies online, just over 250 2020 graduates marched to “Pomp and Circumstance” in caps and gowns in the Veale Convocation, Recreation and Athletic Center.

“Welcome back home,” President Eric Kaler told the class with a smile, later adding, “Regardless of your path, be sure to keep taking some big, brave steps.”

A day earlier, Kaler had greeted alumni luncheon attendees with news that an anonymous donor had followed a $20 million challenge gift three years earlier with a second one of $10 million. The original commitment had divided the dollars evenly between the School of Medicine and the Case School of Engineering for endowed professorships, even allowing the individual giving the matching amounts the right to name them.

“To our anonymous donor—and you know who you are—please know how thoroughly we appreciate your generosity,” President Kaler said.

The lunch also including the honoring of five Case Western Reserve graduates with Alumni Association awards:

Throughout the weekend, a series of events took place—in person and virtually—for alumni and other members of the Case Western Reserve community.

Weatherhead School of Management hosted a lecture on “Future Trends in Healthcare” by Peter Pronovost, University Hospitals’ chief quality & clinical transformation officer and CWRU clinical professor of anesthesiology and critical care medicine. A renowned patient-safety champion and researcher, Provonost shared stories from his career and encouraged the audience to “stop believing harm is inevitable and start believing it is preventable.”

The School of Medicine provided several in-person and virtual opportunities to connect, including a celebration of the school’s academic societies featuring an address from double-alumna Julie Gerberding (WRC ’77, MED ’81), for whom the school’s most recent academic society has been named.

The School of Law unveiled building renovations made possible through the support of philanthropist Roe Green. The student lounge was rededicated as “Ben’s Place” in memory of Green’s father, Judge Ben C. Green (LAW ’30). A candid photo of the duo hangs in the space, paying tribute to the “man behind the robe”—a man his daughter describes as “kind with a sense of humor, a friend to many, a great storyteller and a wonderful father.”

The Alumni Association honored CWRU’s history of progress and social justice, first with a two-part livestream featuring alumni who protested the Vietnam War through a 1970 sit-in, and later with a celebration of the 10-year anniversary of the university’s LGBT Center in the Thwing Ballroom that featured remarks from President Kaler.