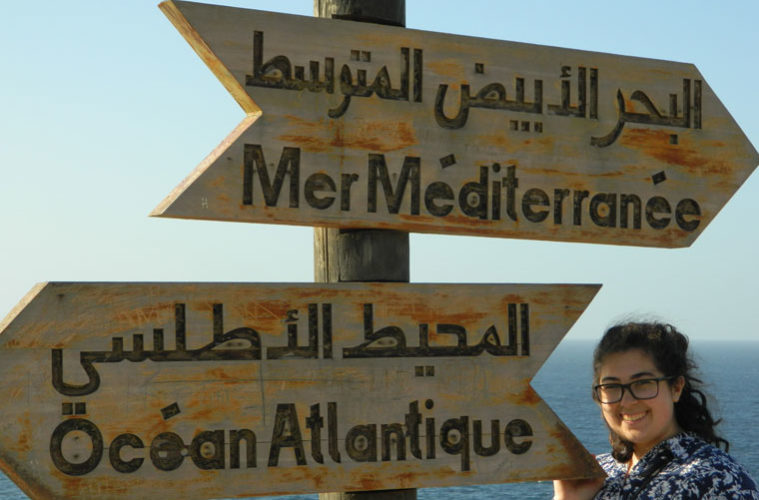 As the COVID-19 pandemic began to escalate in the United States earlier this semester, some Case Western Reserve University staff focused on the situation in other countries—specifically those where many CWRU students were participating in a semester abroad. From monitoring flight paths overnight, to coordinating chartered flights with study abroad programs and U.S. Embassies, staff in the Center for International Affairs, the Travel Services Office and many others put forth an extraordinary effort to get all 101 students who had been studying abroad this semester to safety.

Third-year student Eileah Pye was completing her semester abroad in Morocco when the country abruptly made the decision to close its borders. With incoming flights halted, many found themselves stranded in Morocco, unable to find flights out of the country, and Pye was no exception.

“Historically, when there’s a disruption in study abroad, it bounces back. If this is teaching us anything, it’s that we’re all in this together—every country is going through the same thing, and I think this only increases the value of international education.”

“Initially we weren’t sure if students were going to be able to get out at all,” said Director of Education Abroad Angela Miller. “After a lot of pushback from those who were advocating for Americans in Morocco, and involvement from many government officials, the U.S. Embassy was able to charter a flight to help get Eileah and other American students safely out of Morocco.”

The chartered flight took Pye to London’s Heathrow airport, where she was able to get a flight back to the United States—but nobody was quite sure where she would land.

“When she boarded, we didn’t know where the flight was headed,” remembered Miller. “We monitored her flight through the night—we had a list of 10 major airports across the country where she could potentially end up.”

Miller eventually received word that Pye’s flight was headed to John F. Kennedy International Airport in New York, and from there she returned safely to her home in Rochester, New York.

While Pye’s case may have been the most logistically challenging, it was not unlike many of the other situations the study abroad office was dealing with.

“Eileah was the only student whose travel involved an embassy, but we were faced with real-time challenges in other cases, such as airspace closings, border closings and stay-in-place orders,” said Miller. “Every time travel warnings changed, it reverberated throughout the field of international education. So we were responding not only to what was going on in the United States, but also what was happening in the various countries where our students were living.”

For study abroad and travel staff at the university, the priority was helping students find and book available flights that were becoming increasingly scarce and unpredictable.

Miller described the situation as a “scramble,” with flights often being canceled or becoming unavailable before they had a chance to complete the booking process. When possible, they focused on finding direct flights for students, both to minimize the amount of travel and the risk of potentially getting stuck somewhere else, all while trying to avoid areas that were experiencing a surge in COVID-19 cases.

“We basically had to live in two or three different time zones throughout the whole period,” said Miller. “We had to make sure we were maintaining communication with our students from our initial contact, through packing their things, arranging transportation to the airport, making sure they made their connecting flight, all the way to finally landing safely at home.”

Fast forward to today: The international affairs team is focusing on the academic success of those students and doing what they can to help them complete their semesters. Many universities have chosen to move their courses online, making it possible for students to continue taking courses through their host institution, even though they’re away from their host countries.

“Our commitment is to do everything we can to make sure our students stay academically whole,” said Molly Watkins, assistant provost for international affairs. “Now that all our students are safe and accounted for, we can focus on academics and financial aid, and make sure students are able to continue their education as much as possible while helping them sort out all the other details.”

Although this situation has significantly disrupted international education, Watkins is confident it won’t diminish students’ desire to experience other cultures, and is ready to continue supporting CWRU students once it becomes safe to travel again.

Reflecting on the challenges of the last several weeks, Watkins is thankful for the hard work and dedication of her colleagues, as well as the cooperation and resilience of our students.

“I credit the risk management team, as well as the university travel office, undergraduate studies, financial aid, health and counseling services, the navigators, and so many great partners—including our students,” said Watkins. “Nobody knew this would happen, and we certainly didn’t expect it to be so quick, but our students did really well and proved to be great partners in getting themselves home.”