Hold the extra burgers and fries when people pleasers arrive 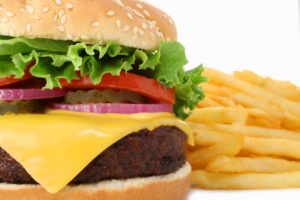 Watch out for that Super Bowl pass—that is the chips, chili or other party food.

If you are a people-pleaser who strives to keep your social relationships smooth and comfortable, you might find yourself overeating in certain social situations like Super Bowl watch parties. A new study from Case Western Reserve University found that, hungry or not, some people eat in an attempt to keep others comfortable.

“They don’t want to rock the boat or upset the sense of social harmony,” said Julie Exline, a Case Western Reserve psychologist and lead author of the study.

Turning down cake or cookies when others are indulging is tough for everyone, but it poses a special problem for people-pleasers, Exline said. If people-pleasers feel a sense of social pressure to eat, they will often eat more in an attempt to match what others around them are eating.

But even if people-pleasers overeat in order to keep others comfortable, they may pay an emotional price.

“Those who overeat in order to please others tend to regret their choices later. It doesn’t feel good to give in to social pressures,” Exline said.

The research findings were reported in the Journal of Social and Clinical Psychology article, “People-Pleasing through Eating: Sociotropy Presents Greater Eating in Response to Perceived Social Pressure.”

This study looked at the eating habits, but, Exline said, the same behaviors that affect food consumption can surface in other areas of the individual’s life. For example, people-pleasers may feel anxious or guilty if they outperform others in areas such as academics, athletics or relationship success. People-pleasers have a strong desire to avoid posing a threat to others, so they often put a lot of energy into trying to keep others comfortable.

Exline led a two-part study of 101 college students (41 men and 60 women) who completed a questionnaire that assessed characteristics for people-pleasing, also known as “sociotropy.” Students high in people-pleasing were those who tended to put others’ needs before their own, worried about hurting others, and were sensitive to criticism, among other behaviors.

After answering these questions, along with some other background measures, students were seated with a female actor who was posing as a second participant in the study. The experimenter handed a bowl of M&M candies to the actor, who took a small handful of candies (about five) before offering the bowl to the participant. After taking the candies, participants reported how many they took and why. Researchers also assessed the number of candies taken.

High sociotropy (people-pleasing) scores were associated with taking more candy, both in this laboratory experiment and in a second study involving recall of real-life eating situations.

“People-pleasers feel more intense pressure to eat when they believe that their eating will help another person feel more comfortable,” Exline said. “Almost everyone has been in a situation in which they’ve felt this pressure, but people-pleasers seem especially sensitive to it.”