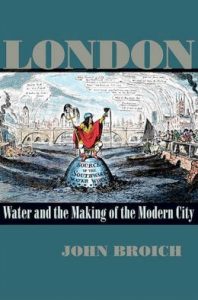 Before the turn of the 20th century, the people of London never knew whether their water faucets would run wet or dry.

“It’s foreign to our thinking that water wouldn’t simply come out of the pipes going into homes,” said John Broich, assistant professor of history. He chronicles the political struggles that controlled Londoners’ water in his new book London, Water and the Making of the Modern City (University of Pittsburgh Press).

“Water’s meant different things at different times to different people,” he said. “My book is about a moment when different sides of the political spectrum fought fiercely over the right way to provide London with its water supply because they knew that the way they settled the question would shape the city in drastic ways for long time.”

And in his book he describes how even residents with sporadic water service in wealthier sections of London often found their water muddy or polluted. Investigators reported that the lack of water accumulated human and industrial waste in streets, creating health and sanitation problems. Often Londoners did not have adequate water for bathing or flushing toilets. Cholera epidemics killed thousands. And firemen battling blazes often found hydrants gone dry in cost-saving moves.

Broich explains how, while we may take for granted that a municipal or regional utility supplies us a cheap, abundant and reliable water supply, that was far from the reality for Victorian Londoners.

They were supplied by a patchwork of eight profit-seeking companies that struggled to meet Londoners needs and faced no legal consequences when they failed. They did not even experience consequences in the marketplace because each company only supplied one region of London—the companies had negotiated local monopolies amongst themselves.

But how to solve this problem?

Many other cities in Britain managed to buy out their old water companies or create new public utilities in the period. But London was different. London actually had no single government for most of the 19th century. It had grown so explosively that it absorbed myriad preexisting towns and jurisdictions. The metropolitan area, therefore, did not have one governing body—it had scores.

Finally, near the end of the 19th century, London received the sort of administrative body that could takeover the city’s water supply.

That is when the fight began in earnest.

A highly active, reforming party quickly gained preeminence in London’s new government—and that worried conservatives on the national government level. They believed London would not stop by seizing its water supply; that would only be the beginning of a total socialist takeover of the cities utilities and services: its gas supply, transport, electricity. Water was not just water.

Why not, conservatives argued, let private enterprise provide the water supply. If services were poor, find solutions that did not include a government takeover. They obstructed every move London made to offer a municipal water supply.

In the case of London, climate intervened to force the issue in the last years before the 20th century. A series of droughts and resulting water shortages so incensed Londoners that conservatives faced an electoral revolt if they did not stop their obstruction. But it was key for conservatives to keep water out of London’s hands.

Their answer was to create a board or trust to oversee a metropolitan water utility comprised of London’s eight former waterworks. The trustees would be drawn from a wide variety of public officials, but pointedly not from London’s socialistic government. Londoners would get a utility nominally answerable to electors but water would stay of the hands of a London government conservatives viewed as radicals.

“We so take water supply for granted today that we’ve forgotten that the matter of public-provided water was a highly fought-over,” Broich said. “And with clean water becoming more scarce and valuable—and efforts to privatize water supplies increasing—it makes sense to learn this history to prepare for future water debates.”