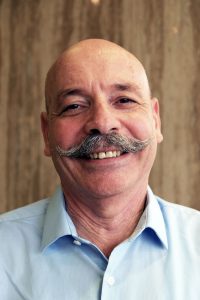 There is a word Yoram Daon uses to quickly sum up his role as a mentor to his Case Western Reserve University students. He will tell you the word “mentor” doesn’t express the task nearly well enough. Instead, he strives to be a moreh (מוֹרֶה) for each of his students.

Sometimes, he explained, English just doesn’t have an adequate match for a word in Hebrew, a language both ancient and increasingly modern. The people of Israel understand moreh very well, said Daon, a native-born Israeli.

“A moreh is a teacher with a capital T, in a sense. A moreh is someone who provides guidance, but is more than a mentor, someone you can bare your soul to, who knows your feelings,” said the 63-year-old Hebrew lecturer in the Department of Modern Languages and Literatures.

“It’s also like being a big brother, a father, maybe even a grandfather. Definitely, being a moreh is about being a friend,” he added.

Daon has received the annual J. Bruce Jackson, MD, Award for Excellence in Undergraduate Mentoring, an honor established by Jackson, a 1952 graduate who wanted to create the award to honor Carl F. Wittke, a dean who was his mentor, friend and adviser.

Daon’s student nominator for a 2014 Jackson Award explained what Daon means to his students:

“Yoram has consistently made himself available to all of his students. Even currently in graduate school, I continue seeking out his knowledge and advice with respect to available opportunities within the community, be it for engaging in volunteer opportunities or work functions. Overall, Yoram has been a phenomenal mentor.”

His varied background—business management, law enforcement, military and other personal areas of interests—helps him when meeting with students about what he teaches, or even about academics in another field.

“Sometimes they might need a smile or a shoulder to cry on,” he said.

Since arriving at the university as a Hebrew lecturer in 2005, Daon has frequently been nominated for the Jackson and Wittke awards, but had never won. So when Case Western Reserve President Barbara R. Snyder announced his name recently as the Jackson Award winner, Daon needed a few seconds to process the news.

“I was shocked,” he recalled. “I called my wife, Michelle, and she was very happy and proud. I told my [three adult] kids, who are in Israel, and they are also very happy about it.” His two daughters and son are all Case Western Reserve alumni.

Daon said he views the award as valued recognition of the dedication to mentoring he believes is common among all his department colleagues.

Daon, a former business manager with an MBA who worked with Israeli publishers of English as a foreign language textbooks and co-authored English for Science and Technology (Kavim Publishers, Israel 2002), expects to stay challenged lecturing about his homeland’s native tongue as it is influenced by English and other languages, technology and modern lifestyles.