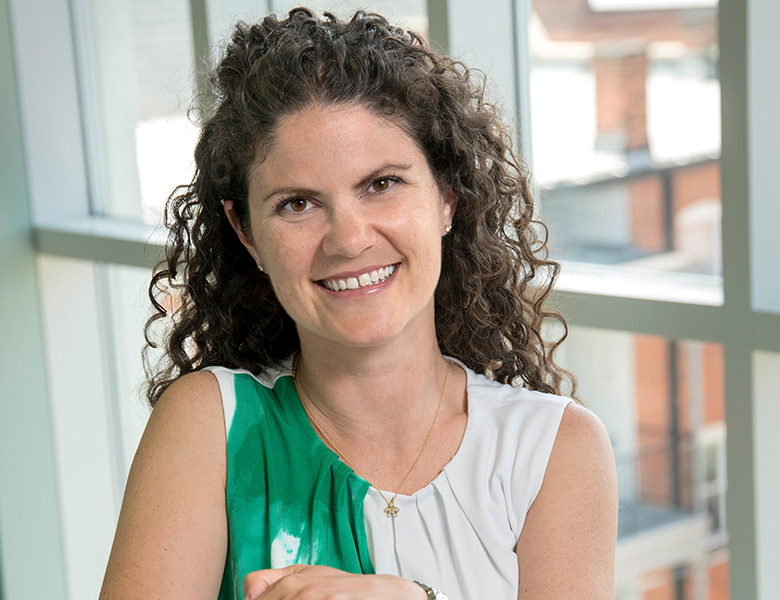 This January, Lauren Calandruccio dropped everything to drive six hours to Chicago to be with a student whose father passed away there after a long battle with cancer.

“She needed someone there,” said Calandruccio, an associate professor of communications sciences at Case Western Reserve University.

Moved by Calandruccio’s example, the student’s classmates organized a care package and sent letters—an outpouring of support fitting the family-like warmth “Dr. Cal” (as she’s known) creates in her classrooms and lab.

“I am incredibly grateful every day that she is in my life,” the grieving student wrote in a letter nominating her for an award. “I am not alone.”

“I love being a scientist,” said Calandruccio, “but my true calling is maximizing the potential of students.”

An audiologist and hearing scientist, Calandruccio joined the university in 2015 to establish the Speech and Auditory Research Laboratory where she is a principal or co-investigator on three research grants from the National Institutes of Health. Together, her team works to improve the understanding of how people hear and communicate through spoken language. 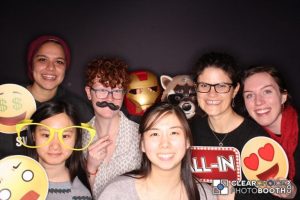 Calandruccio and students from the Speech and Auditory Research Lab

Spending scant time in her office, Calandruccio often opts to work out in the open, in lab space she shares with students—not only to serve as a resource for their needs, but as a professional example.

“They see research is hard for me, too. Students see me busy, see what working hard really means, no matter the job,” she said. “Even if my students don’t become hearing scientists, my mission is to help them become well-rounded people confident in their skills and abilities.”

At each semester’s outset, Calandruccio asks students in her lab to sign a pledge—and students in her classroom to agree—to banish negativity, backbiting and other “noise” that gums the gears of teamwork and creativity, or else find another lab or class.

She’s never had to enforce it.

The rules pull students together and seed personal connections, creating a family-like vibe, she said. It’s a deliberate effect that comes from borrowing and remixing methods from past mentors to create an approach uniquely hers.

Described by students as funny and “willing to be herself,” Calandruccio is known for weekend phone calls to prep students for presentations, bringing in cakes on birthdays and Valentine’s Day boxes of heart-shaped donuts.

“Personal relationships are so meaningful at universities: Many students have few family members close by—exactly when they’re doing some of their most challenging work,” she said. “If I take care of them, they’re going to take care of other people.

“Life is just so much nicer that way.”

The Wittke Award was established in 1964 to honor Carl Wittke, who retired the year before after serving as a Department of History faculty member and chair, as well as vice president of Western Reserve University. In 1971, after Wittke died, the nature of the award changed to recognize excellence in teaching undergraduates.

The Jackson Award honors outstanding advising and mentoring of undergraduate students by a current employee or emeriti faculty member. J. Bruce Jackson, a 1952 graduate of Adelbert College, established the award in 2003 to honor Wittke, who served as Jackson’s mentor as an undergraduate.

Each year, both honors are presented to two Case Western Reserve faculty members during commencement’s diploma ceremony. This year, the School of Medicine’s Drew Adams also won a Jackson Award, and Robert Spadoni, from the Department of English, was honored with a Wittke.