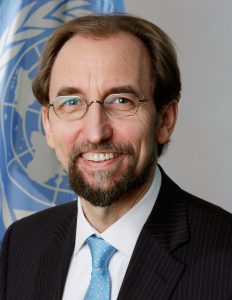 In addition to his address, which is titled “The Road to Violence,” Zeid will receive the Cox International Law Center Humanitarian Award for Advancing Global Justice.

The event is free to attend and will be followed by a reception at the School of Law.

Zeid has held the United Nations’ highest human rights position since 2014. Previously, he was Jordan’s permanent representative to the United Nations. From 2007 to 2010, he served as Jordan’s ambassador to the United States and Mexico. He played a central role in the establishment of the International Criminal Court, and was elected the first president of the Assembly of State Parties of the Court in September 2002.

In his role as UN High Commissioner for Human Rights, Zeid recently delivered high profile speeches on balancing human rights and the war on terrorism, preventing violent extremism, and responding to the Syrian refugee crisis.

The Klatsky Endowed Lecture in Human Rights was established in 1991 by a grant of University Trustee Bruce Klatsky, CEO of Phillips-Van Heusen Corp.

Established in 2004, the CWRU Cox International Law Center’s Humanitarian Award is given to an individual who has made a significant contribution to advancing global justice. The recipient is selected by the two dozen law faculty associated with the Cox Center.

Zeid is the second UN high commissioner for human rights to receive the award.