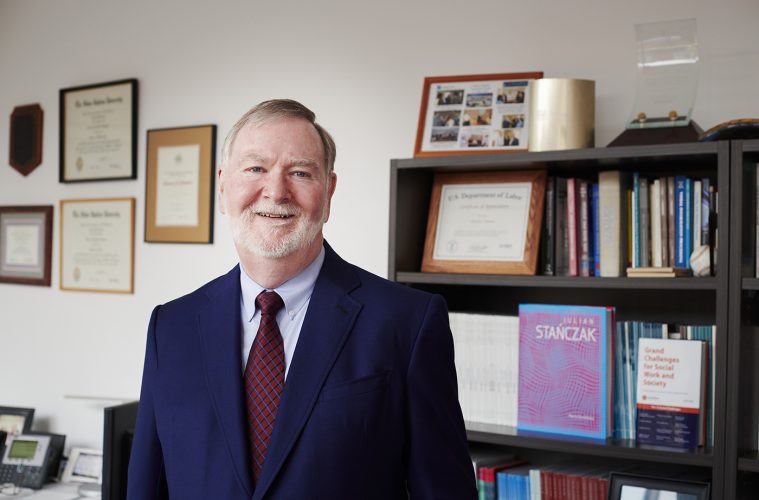 When Grover “Cleve” Gilmore agreed to lead the Jack, Joseph and Morton Mandel School of Applied Social Sciences in 2002, his appointment was intended to last only a year. Now, after a 20-year tenure as dean of the highly ranked social work school, he will retire June 30.

During Gilmore’s time as dean, the Mandel School has consistently ranked among U.S. News & World Report’s top 10 social work schools and No. 1 in Ohio.

Under his leadership, the school has launched an undergraduate social work minor, seven additional research and training centers, and the university’s first short-term study abroad program, open to all students to provide opportunities to learn about social policies and practices.

Gilmore also recognized the opportunities inherent in online learning early, leading the Mandel School’s establishment of the university’s first online degree program in 2013. And in Fall 2020, he oversaw the launch of a new innovative generalist curriculum, designed to consolidate the application and integration of knowledge and skills and emphasize two hallmark themes: leadership and social justice.

“One of Cleve’s greatest strengths as a leader has been his commitment to innovation,” Interim President Scott Cowen said. “He not only began exploring online education before others, he acted. He didn’t just think about the potential of short-term study abroad options, he started them. Finally, he recognized the value of a curricular redesign, and saw it launch last fall. We are grateful for his dedication and foresight, and wish him all the best.”

The school also flourished philanthropically. In the university’s most recent capital campaign, Forward Thinking, the Mandel School raised $44 million, exceeding the original campaign goal by $12 million. The funds supported the 2016 expansion and renovation of the Mandel School building, program support, scholarships and endowed professorships. In total during Gilmore’s tenure, the school raised funds for 43 new endowed scholarships and increased the scholarship endowment value to $20.5 million.

Gilmore is so committed to student support that the school recently has raised funds for scholarships in his honor. Already surpassing its goal of $1 million, the fund will provide full tuition for one student per year in perpetuity.

Earlier in his tenure, the school added a second building to its portfolio, the Jack, Joseph and Morton Mandel Center for Community Studies, which is home to Mandel School centers and classrooms.

A career of collaboration

Gilmore joined Case Western Reserve in 1975, the same year he completed his doctorate in psychology from Johns Hopkins. Six years later, he earned tenure—and his first National Institutes of Health (NIH) grant as a R01 Principal Investigator. The award marked the start of  more than three decades of federal research support.

Gilmore’s scholarship consistently involved interdisciplinary research. Over the years he has collaborated with colleagues in biomedical engineering, geriatrics, ophthalmology, neurology, pulmonology and psychiatry.

Gilmore pioneered methods to improve Alzheimer’s patients’ perceptual and cognitive performance, demonstrating that a portion of the cognitive problems associated with aging—along with the memory problems in Alzheimer’s disease—may be attributed to sensory decline instead of  higher-order cognitive functions.

His latest primary research interests are the changes in vision that are associated with healthy aging and with Alzheimer’s disease; he is leading a project to examine the impact of cataract removal on the cognitive status of Alzheimer’s patients.

In addition to his research, Gilmore devoted substantial time to teaching and mentoring students. He received the John S. Diekhoff Award for Distinguished Graduate Teaching in 1984 and was nominated multiple times for the Carl F. Wittke Award for Excellence in Undergraduate Teaching. He also chaired the psychology department for five years and the Faculty Senate for one, and served as associate dean of the College of Arts and Sciences from 2000-2002.

On May 6, Dean Gilmore’s legacy was honored at a special virtual retirement celebration—a tribute book and video premiered at the event—and the story of his tenure was featured in the Mandel School’s latest issue of Action magazine.

“As stated by Mort Mandel,” representatives of the Jack, Joseph and Morton Mandel Foundation said in the tribute book, “‘The forces that influence an institution the most are the human forces—the people who manage it, inspire it, lead it and build it. Only great people build great institutions.’ Cleve is one of those great people.”

Provost and Executive Vice President Ben Vinson III echoed this sentiment: “As I think about Cleve, it’s his spirit—the spirit of caring—that I will remember most,” Vinson said. “Cleve is a people person with a warm demeanor and friendly approach. He invites people to get to know him better, and his caring nature instantly creates a welcoming atmosphere. It’s these characteristics that have made him so successful, and it’s this spirit of caring that has been passed on to the legions of social workers who have graduated from our prestigious school.”

The university is in the final stages of its national search for the next dean of the Mandel School. Sharon Milligan, Mandel’s longtime associate dean for academic affairs and student services, will serve as interim dean starting Thursday, July 1.

“I feel very fortunate to have shared this last year with all of my colleagues,” said Gilmore. “It has been a challenging year for everyone, but it has shown the strength and resilience of our faculty, staff and students—it will always be a reminder to me of how great the people of Case Western Reserve and the Mandel School are.”