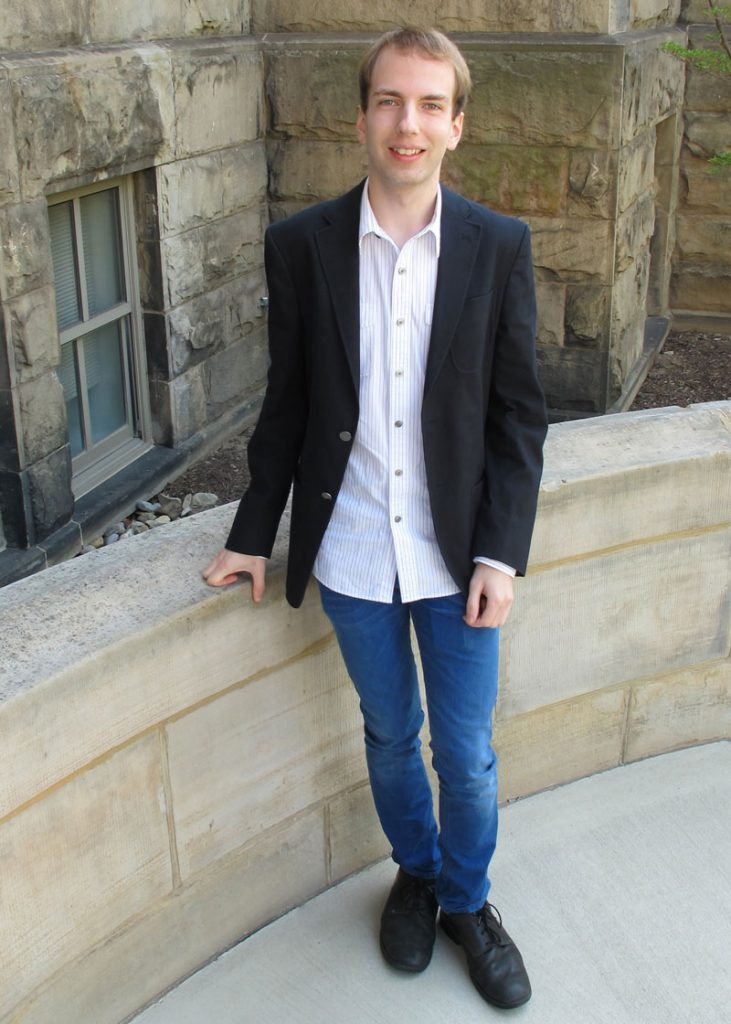 After years of traveling to Japan and studying its culture, economics major Alex Warofka soon will become part of it. The graduating senior is moving to Japan this fall to pursue research as a Fulbright scholar.

Through his yearlong Fulbright opportunity, Warofka will combine his long-held interest in Japan with his economics studies while he examines the country’s changing industrial sector. The twin pressures of an aging population and shrinking workforce in Japan have led Japanese firms to employ more foreign workers, many of whom are from China.

As he explained in his Fulbright application, Warofka hopes to quantify the “economic impact of the Chinese diaspora on the Japanese economy and thus better inform the present debate surrounding Japanese immigration policy.”

Warofka, 22, has visited Japan frequently since he was 14. In high school, much of his studies were completed online through Stanford University’s Education Program for Gifted Youth—an unconventional educational background that allowed him the flexibility to travel. He also participated in Columbia University’s Kyoto Consortium for Japanese Studies, and later studied abroad as a Weatherhead School of Management student.

These experiences helped him learn many intricacies of Japanese culture, such as political and economic tensions as well as the language. Soon after beginning at Case Western Reserve, he was at a fourth-year level for Japanese language studies.

Lecturer Hiroko Amick, who teaches in the Department of Modern Languages and Literatures, said Warofka’s academic success will help ease his transition into Japanese life.

“He excelled in everything we did in class,” Amick said. “When he goes to Japan, he can ease into that society … I think that in no time he will be at a good level to conduct research in Japanese.”

Amick, a native of Japan, added that said, Warofka’s research is a “hot topic … There are many industries there that may need foreign workers.”

Warofka’s goal is to conduct strong enough research that his results can be published in a relevant journal. He intends to complete his work in both English and Japanese.

Warofka said he also intends to pursue university-level coursework on Japan’s political, economic and social landscape as well as improve his language skills; he plans to sit for the most advanced level of the Japanese Language Proficiency Test while abroad.

He knew he wanted to conduct research for a year after graduation, and this Fulbright grant allows him to do it directly in the country that has commanded his interest for so many years.

“Ultimately, I want to do an economics PhD, and the top programs for that are extremely competitive,” Warofka said, “so I think the Fulbright will help with what I want to do in the future.”

Susan Helper, chair of Weatherhead’s economic department, said she is pleased for her student and the university.

“I am thrilled that Alex will have this opportunity to research in Japan,” she said. “I’m also very happy that Case Western Reserve will have such a thoughtful and articulate graduate representing our nation.”

The Fulbright Grant Program is sponsored by the U.S. Department of State, Bureau of Educational and Cultural Affairs. It is the largest U.S. international exchange program offering opportunities for students, scholars and professionals to undertake international graduate study, advanced research, university teaching and teaching in elementary and secondary schools worldwide. It was established in 1946 by Congress to enable and increase mutual understanding between the people of the United States and the people of other nations.