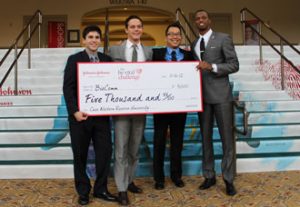 To combat this trend, the 25-year-old Weatherhead School of Management student, with other Case Western Reserve students from medicine, law, business and other disciplines, collaborated to create BioComm, an organization to help biomedical research make the difficult leap from lab to commercial market.

BioComm recently took second place—and a $5,000 prize—out of 74 student teams in the 2012 Be Vital Challenge, a national competition sponsored by the consumer health company Johnson & Johnson to inspire students “to be vital creatively.”

Long-term, the vision for BioComm is to create a student organization that develops business plans and strategies for on-campus biomedical research and to host workshops to teach students how to take a product from design to distribution.

Pooling limited resources, including spare time, Jackson’s BioComm group made a video for the Be Vital competition.

“What I’m trying to do,” Jackson explained in the group’s video-contest entry, “is focus on entrepreneurial biotechnology, pretty much catalyzing technologies from the lab to get them to the outside world as actual products, from bench to bedside.”

Jackson, with graduate students Uram Lee, Wesley Mershon and Brandon Pochatila, accepted the award on Nov. 16 in Orlando, Fla. Case Western Reserve finished behind only UCLA, which received a $10,000 prize.

Jackson said he and others in his group were inspired by CWRU’s interdisciplinary academic program, Fusion, which combines the brainpower of students in business management, law and science/engineering programs for translational research.

The BioComm group had some guidance from the university’s Office of Technology Transfer, but BioComm was not created for course credit.

Jackson said he hopes to bridge the gap that prevents scientific discoveries from getting to people who need help. Scientists tend not to understand commercialization, and professionals trained to translate research into marketable business ventures tend to take on relatively few, he noted. Research can get lost in the maze.

The BioComm business plan submitted for the Be Vital competition describes Cleveland as an emerging world medical center and a perfect location for startup biotech companies. Jackson said he has sought wide-ranging guidance within Cleveland’s emerging medical community.

“I’m proud of what we have accomplished so far,” Jackson said. “I hope this is just the beginning.”