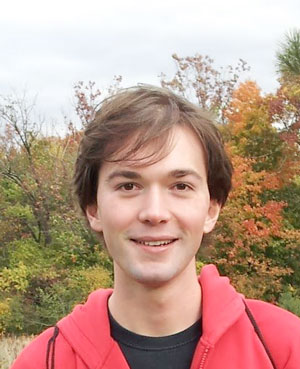 Two Case Western Reserve University students have been honored by the Barry M. Goldwater Scholarship and Excellence in Education Foundation, which recognizes outstanding potential and commitment to excellence in science, engineering and mathematics.

Todd Norton, a third-year math and physics major, won a Goldwater scholarship and Jack Edelbrock, a third-year in macromolecular science and engineering was named an honorable mention this year. The scholarships are named for the late Arizona Sen. Barry Goldwater.

Peggy Goldwater Clay, chair of the foundation’s board of trustees, announced recently that 271 scholarships have been rewarded nationally from among 1,107 nominated sophomores and juniors. Scholarships cover up to $7,500 a year for tuition, fees, books and room and board.

“Todd is so mathematically talented, it’s really amazing,” said Elisabeth Werner, a mathematics professor who has been teaching Norton in graduate classes. “But he’s not singularly oriented, he’s well-rounded. He’s fluent in German and he makes pottery on weekends—beautiful pots and dishes.”

Norton, who also enjoys jogging and writing, said he’d like to spend retirement making pottery. Until then, though, he plans to earn a PhD—most likely in math—and study theoretical mathematics. He may apply the research to physics, his second love.

“Math and physics are the things I was good at in high school and I wanted to learn more about them,” Norton said.

He began pursuing a career in physics research during summers at Carnegie Mellon University, near his Pittsburgh home. There, he studied and developed ways to process desirable materials and tested and refined a computer model against experimental data.

He wrote an algorithm to identify signatures of magnetic tunnel junctions on a scan with an atomic force microscope and modeled their current density using other software. Junctions are made of thin layers of magnetic alloys separated by a thinner resistor that can be manipulated to enable electrons to tunnel through it. They’ve shown potential use for computer memory and other applications.

Edelbrock, from Flossmoor, Ill., has also spent his summers doing research, working on polymer-protein conjugates to deliver therapeutic proteins to the ill, analyzing and testing aerogels to filter estrogen antagonists found in sunscreen from swimming pool water, and more.

“Jack is one of the best students in the department,” said Jon Pokorski, assistant professor of macromolecular science and engineering. He said Edelbrock earns respect in the lab and classroom for his intellect, work ethic and enthusiasm, which are well beyond a typical undergraduate.

Watching his grandmother progress through the end stages of Alzheimer’s disease before she died inspired Edelbrock to pursue graduate studies to find an appropriate treatment for the disease.

The Goldwater Foundation is a federally endowed agency established in 1986. Since its first award in 1989, the foundation has awarded more than 6,500 scholarships, with plans to reward about 300 more for the 2014–2015 academic year.