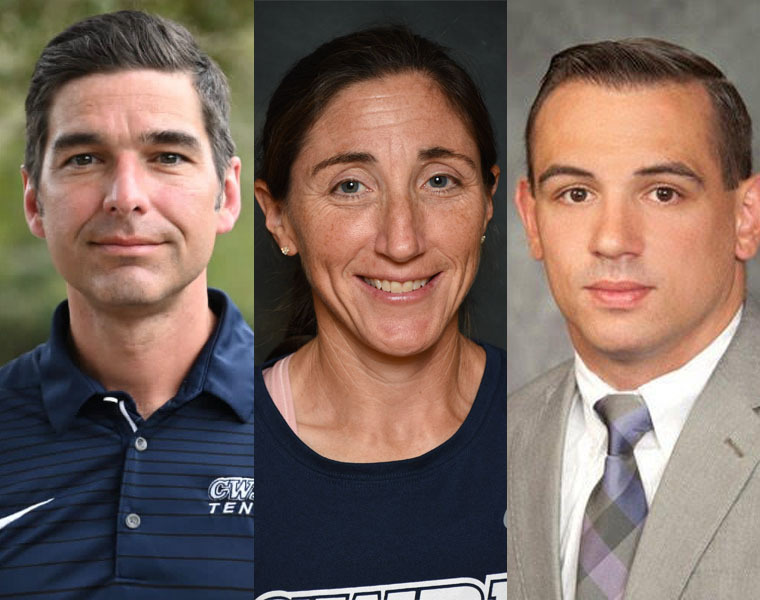 Get to know three coaches at CWRU

If you ask anyone who has participated in team sports what makes for a good coach, you’re likely to hear it requires much more than directing the plays of a game. Coaches inspire, motivate and support teams to reach their goals, all while encouraging individuals to become the best version of themselves—on and off the field.

For these reasons and so many more, in 1972 President Richard Nixon proclaimed Oct. 6 to be National Coaches Day, a time to honor coaches for the incredible impact they have.

The relationships and the journey. Those are the two best parts of coaching for Joshua Malave.

Malave knows a thing or two about seeing something through, be it guiding a wrestler’s academic journey or nurturing a wrestling program. After beginning his coaching career at Union Pines High School in North Carolina, Malave, a Cleveland native, promised his wife that if he were offered a job in Ohio, he’d get them back home.

He did so in 2014, taking a job teaching world history and coaching wrestling at Firelands High School in Oberlin. There, Malave led the wrestling program from dead last in the school’s conference to first just two years later. He then took over as head wrestling coach at the University of Mount Union, his alma mater, before becoming head wrestling coach at Case Western Reserve in the spring of last year.

In each of his roles, he’s encouraged his student-athletes to pursue high-level goals in everything they do—and to be focused, creative and relentless in their pursuit of academic and athletic excellence.

“Something that I frequently say to my athletes is that ‘wrestling is a vehicle,’” Malave explained. “I hope that they use the hard-earned values that this sport teaches: discipline, hard work, teamwork, character, and perseverance. This sport is hard, but so is life. Ultimately, we use controlled struggle to help prepare for uncontrolled struggle.”

Abby Richter started playing soccer when she was 4 years old. Her devotion to the sport only grew from there, morphing from a hobby into a meaningful career.

“Growing up, I didn’t have a specific career in mind,” she explained. “I graduated [from college] with a degree in education but after a few months of teaching, decided that wasn’t the career path for me.”

Coaching offered Richter the chance to pivot her career in a way that combined the skills she learned in college with her passion for soccer. Since landing her first coaching job, she’s loved working with young people, teaching both the game of soccer and valuable life skills for after graduation.

Richter has worked in collegiate coaching, at various levels and at different positions, for more than 20 years. She started coaching at a local high school while in college, and has since served at five universities—including a 15-year stint as the assistant coach at Kent State University.

Every day, she emulates the way impactful coaches in her life approached the profession—one had a palpable passion for the game and always knew the right thing to say to motivate his players, and another, who was her first female coach, balanced family life with coaching, and always took the time for Richter and her teammates.

“Being a coach means having the ability to inspire and motivate people to go above what they think is possible,” Richter said, who strives to instill integrity, resiliency, commitment and selflessness among her athletes. “I hope they take with them a lot of great memories of the time they spent on the team. This includes all the time, effort and sacrifices they made to be a part of the program and being a college athlete.”

For Todd Wojtkowski, coaching is more about life lessons than it is about the sport. That’s something he took away from his high school tennis coach, Keith Vens, and his coach’s family members, all of whom taught him much more about life than tennis.

After Coach Vens passed away on Wojtkowki’s 18th birthday, he took it upon himself to continue playing—and coaching—the sport he’d become so passionate about. He went from coaching with Vens’ son at a country club, to coaching at summer camps and then teaching at the No. 1-ranked tennis resort in the United States, Kiawah Island, while he was earning his MBA.

When he graduated, Wojtkowski was ready to put his degree to work—but life had other plans.

“Once the 2008 recession happened, I had two [non-coaching] job offers freeze hiring and therefore I went into tennis as a way to buy some time,” he noted. “I’ve now been at CWRU for 14 years.”

Wojtkowski has built the Spartans men’s tennis team into one of the top programs in Division III, most recently guiding the squad to back-to-back second-place finishes at the NCAA Championships and claiming Wilson/Intercollegiate Tennis Association National Coach of the Year honors in 2021.

“Being a coach is [about] helping others to become better people than they would have been otherwise,” Wojtkoswki explained. “I just want to make sure that anyone [who] comes through this [tennis] program becomes a very special person and goes on to live an incredible and impactful life.”