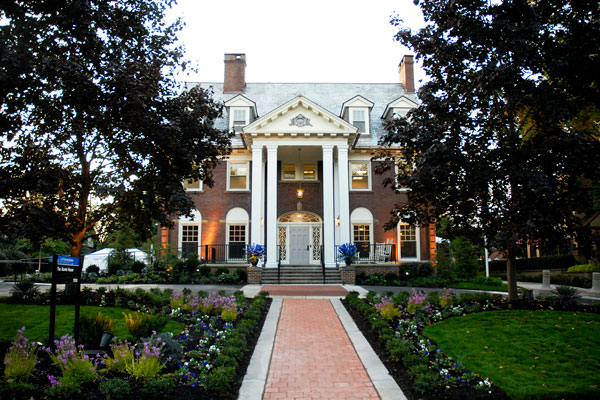 Now, on the occasion of his 50th class reunion, he and his wife Jocelyne wanted to do yet more for his alma mater.

They had given to student scholarships. They had supported the new university center. Those causes reflected a way to give back some of what he had received as a student.

This commitment focuses on his other transformational experience: his time as an alumnus. Specifically, Frank and Jocelyne have pledged up to $4 million for the university’s new Linsalata Alumni Center project, an expansion of the existing Alumni House to allow for larger events, meetings and programs.

“My time as an undergraduate helped make me who I am—in business, in civic life, even within my family,” Frank Linsalata said. “Our first gift was about the students in scholarship and experience like the University Center. As I celebrate my 50th reunion, this is a gift for alumni and the future alumni of Case Western Reserve University. With this new gift, Jocelyne and I wanted to lay a foundation for other graduates to reap the rewards of an ongoing relationship with Case Western Reserve.”

Frank Linsalata, chairman and founder of Linsalata Capital Partners, has been a member of the university’s Board of Trustees since 1999. He is the only undergraduate alumnus to serve as the board’s chair (from 2004 through 2008), and he also chairs the university’s capital campaign, Forward Thinking. In 2008, Frank and Jocelyne gave $3 million to Case Western Reserve, with two-thirds supporting the Tinkham Veale University Center and the remainder for scholarships. That same year, Linsalata’s board colleagues recognized his tireless efforts and deep generosity with the University Medal, the highest honor it can bestow for leadership, dedication and service.

Case Western Reserve officials had discussed creation of a central location for alumni for decades, but did not focus squarely on a site until the mid-2000s. Rather than continue to search for a spot to build anew, they looked to an existing landmark, a 1911 Georgian brick home that the university had acquired in 1953.

Dedicated in October 2007, the house quickly became a favorite spot for events, from university gatherings to weddings, and as a special place to view the homecoming parade every year. The crowded calendar underscored graduates’ desire for a “home of their own” on campus, as well as the need for additional space. The 8,900-square-foot addition, dubbed Alumni Hall, would be able to accommodate as many as 240 guests, but also could be divided into smaller sections depending on attendance. Plans also call for an exterior terrace that could hold as many as 100 guests.

Frank and Jocelyne have made part of their gift contingent on a $1 million match from other donors before the end of this fiscal year, June 30, 2014. In 2012 Frank issued a challenge grant as part of that year’s annual fund efforts; the response was so strong that he and Jocelyne decided to apply a similar model to the Linsalata Alumni Center project.

Jocelyne, an active member of the Inamori Ethics Prize committee and several other university groups, emphasized the significance of the new space to their family and to the university.

“Frank and I both have gained so much from the colleagues we have met and friends we have made through his involvement as a graduate,” Jocelyne said. “This space provides an opportunity to commemorate those benefits and encourage others to reap them as well.”