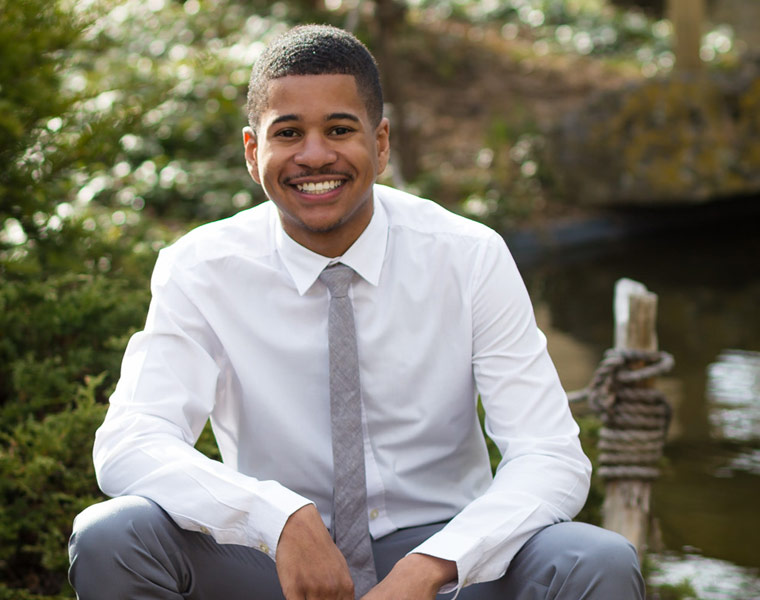 Editor’s note: This article has been updated to include the date and time of the service for McGuire.

Richard McGuire, who was set to begin his fourth year as a student at the School of Dental Medicine, passed away this week from complications of sickle cell disease. He was 27.

A native of Chicago, McGuire was inspired to pursue a career in dental medicine following an undergraduate experience abroad in Namibia, where he saw first-hand the negative effects of lack of dental-hygiene knowledge.

During that summer, while he was an undergraduate at Oberlin College, McGuire taught computer literacy. When he returned, he began research to further explore the importance of education in oral health. He also spoke with an Oberlin alumnus who was working toward a public health degree. Combined, those experiences shifted McGuire’s path toward dental medicine—particularly, working with underserved populations.

“He was a fierce advocate for what he believed in and was truly passionate about making an impact on the youth in our community and addressing health disparities,” said Morgan Celistan, a friend and classmate of McGuire’s. “Richard knew he had the power to make a difference in the lives of those he met, and he truly did.”

McGuire began working toward his degree in dental medicine in 2016, after completing his master’s degree in physiology at Case Western Reserve. A Posse Scholar at Oberlin, he’d completed his undergraduate degree in biology in 2014.

A commitment to helping others

In a message shared with the School of Dental Medicine community earlier this week, Dean Kenneth Chance and Assistant Dean for Admissions and Student Affairs Kristin Williams said McGuire “quickly became known for his ready smile and strong commitment to providing care to underserved populations.”

During his education at Case Western Reserve, McGuire also learned the importance of interprofessional education, once again opening up his views on health care by participating in efforts to connect students in different health fields with one another. As part of the efforts, McGuire collaborated with a team of students at Neighborhood Family Practice, where they worked with patients with diabetes.

Reflecting on the experience, McGuire shared how it helped him understand dentistry’s role in the broader health care landscape and how other professions, such as social workers and those in public health, contribute to the overall picture.

A “positive force” at CWRU

While a master’s student at Case Western Reserve, McGuire was a graduate fellow with the Office of Multicultural Affairs. During that time, he contributed to development of a bias reporting tool and helped build community among multicultural graduate students, regardless of their school. He later went on to serve as a leader of the Black Graduate and Professional Student Association.

“He was just a positive force on the team,” said Director of the Office of Multicultural Affairs Naomi Sigg, who also called McGuire compassionate, kind and funny.

Sigg said McGuire “deeply cared” for doing what was right and he demonstrated it with both words and actions.

For example, in response to an instance of hateful speech written on campus, students came together to share what they wanted the community to know, writing messages on their arms. McGuire wrote “allies = action” on his hand to encourage allies to respond when they see instances like bias, microaggressions and exclusionary behavior. The moment has stuck with the Office of Multicultural Affairs, as the team includes a photo of McGuire from that day in all of its Diversity 360 presentations and a copy hangs in the office’s conference room.

Celistan said McGuire was committed to helping others strive for more. McGuire sent a text to Celistan each Sunday posing the question: “What are five goals you have for this week?”

He was “he was continually selfless,” Celistan said, as he often checked in on family or friends or thought of “innovative ways to reach out into the community.

“He had so many amazing and unique experiences in his 27 years that most people don’t experience in a lifetime,” said Celistan. “Though his life was short, he truly made the most of every moment. He was loved dearly by so many people and his spirit will not soon be forgotten.”

Students who would like support during this difficult time are encouraged to contact counseling services at 216.368.5872. This line is staffed by a counselor 24 hours a day, seven days a week. Students also can stop by Sears 220 during weekday business hours to meet with a counselor in person. Faculty and staff also can access counseling at any time by calling IMPACT Solutions at 1.800.227.6007; you can learn more about their programs at myimpactsolution.com.