Recent graduates CJ Krimbill and Louis Stuerke will represent the men’s tennis team, with Krimbill competing in the singles draw and both pairing up for the doubles tournament.

Rising junior Nithya Kanagasegar and recent alumna Sara Zargham will compete on the women’s side. They will join forces in the doubles tournament, with Kanagasegar also competing in the singles draw.

At the start of the season, Zargham didn’t know if she’d ever be able to compete again, let alone at the NCAA championships. Having undergone hip surgery in January, she didn’t make it back onto the court until March. 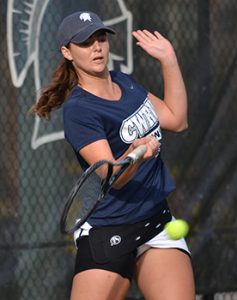 “She went through a lot this season to finish her senior year,” women’s tennis coach Kristen Gambrell said. “I don’t think she could have dreamt up anything better.”

Gambrell said it was quite the feat for Zargham and Kanagasegar to finish the season ranked high enough to make it to the tournament, having only competed in half the matches. They finished their season 12-7.

Zargham and Kanagasegar are ranked third in the Central Region. After finishing 3-0 in the conference championships in April, they received All-UAA First Team recognition.

The duo has played together for two years, developing a strong bond on and off the court during that time. In order to be successful in the tournament, Gambrell said they must play confidently, stay focused and not allow themselves to get too nervous.

“The points are going to be close,” she said. “That mental edge is really important.”

Zargham and Kanagasegar will compete against Kait Brogan and Shelby Harris of Mary Washington at 4 p.m. today in the round of 16. The winner of the match will go up against the winner of the competition between fourth-seeded Tiffany Cheng and Joulia Likhanskaia of Bowdoin College and Marie Lutz and Liza Southwick of Trinity University. 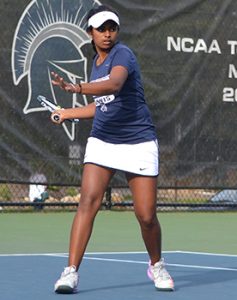 Individually, Kanagasegar—ranked seventh in the central region—was selected as one of 32 players to compete in the singles draw. She went 15-10 this season in the first singles spot. After going 3-0 in singles matches at the conference championships and earning all-conference second team recognition, Kanagasegar was named the University Athletic Association Most Valuable Player, a first in the women’s tennis program’s history.

“You never get an easy match,” Gambrell said of Kanagasegar’s role in the first singles spot. “I think her record is a testament to her hard work.”

Today, Kanagasegar will go up against Caroline Ward of Claremont-Mudd-Scripps Colleges, ranked fourth in the West Region. Should she win, Kanagasegar will face the winner of the first-round match between second-seeded Eudice Chong of Wesleyan University (Connecticut) and Brooke Tsu of Carnegie Mellon University.

Krimbill and Stuerke will look to build off their performance in the NCAA Individual Championships last year, when they advanced to the semifinals of the doubles draw. 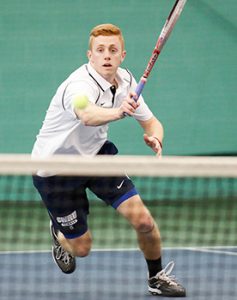 The duo heads into the tournament as the top-seeded doubles pairing with a season record of 30-5, winning 14 straight matches. They are ranked first in the central region and garnered All-UAA First-Team honors this season.

“Both players had very little room to show improvement, simply based on how well they did last year—however, they both took their game to another level,” men’s tennis coach Todd Wojtkowski said. “They also changed some things mid-season with doubles that allowed them to run the table toward the end.”

Both Krimbill and Stuerke are among the top eight winningest players in school history.

They will take on University of Texas – Tyler’s Arthur Fagundes and Frankie Fischer at 3 p.m. today. The winning team will advance to the quarterfinals, where they will compete against the winner of the match between Luke Tercek and Luke Trinka of Bowdoin College and Michael Buxbaum and Jeremy Dubin of Johns Hopkins University.

Krimbill is making his third-straight appearance in the NCAA Individual Championships, having competed in both the singles and doubles draws each year. 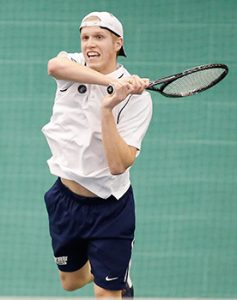 Seeded eighth in the singles draw, Krimbill will face Oglethorpe University’s CJ Antonio today. Should Krimbill win, he will advance to compete against the winner of the first-round match between Texas-Tyler’s Fagundes and Bates College’s Ben Rosen.

The men’s tennis team, ranked seventh, earned a spot in the 2016 NCAA Division III Men’s Tennis Championships earlier this month, but fell to No. 17 Kenyon College in the third round.

“This was a very up and down year for our program as we reached new heights being ranked No. 5 in the nation. We had some incredible wins that propelled us to new heights, and to the NCAA tournament for the third time in the last four years,” Wojtkowski said. “We really wanted to do as well in NCAA nationals as we had done in the ITA Nationals, but it wasn’t the case. In the end, it has fueled CJ and Louie to do well at the individuals and the rest of our team to take it a step further next year.”