“Especially at a time where federal funding is getting harder and harder to come by—and the types of research being funded at the federal level are increasingly limited—it’s even more important that ACS is there as not only an advocacy agency, but also as a funding agency,” he said. 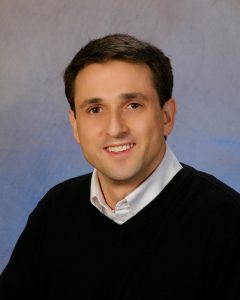 Rose’s research aims to solve a vexing problem in colorectal cancer: How should physicians follow survivors in the years after successful treatment to detect a recurrence as early as possible without over-testing these patients?

“It’s been a big problem for decades really, trying to find out how best to extend life by following these folks,” Rose said.

With countless possible combinations and schedules of blood tests, imaging, colonoscopies and doctor visits, testing every scenario in a clinical trial in all types of patients is impractical. Rose’s work uses some of what has already been learned in past clinical trials to train a computer model to simulate cancer recurrence in hypothetical patients and then examine the likely outcomes of any number of alternative follow-up regimens.

“The goal, eventually, is to personalize the follow-up regimen of individuals based on things like tumor markers that are being expressed, the original stage of their cancer, how they were treated originally, their age and other details,” he said.

Rose considers ACS funding essential to his research. Without it, he said: “It wouldn’t be getting done, at least not on the timetable that’s feasible now, and possibly not at all.”

Each year at Relay for Life, the Case Western Reserve community does its part to help generate much-needed financial support for ACS. Money raised from worldwide Relay for Life events goes toward research, patient support and more.

In 2015, ACS designated $151 million in overall fundraising for cancer research.

Case Western Reserve University’s chapter of Colleges Against Cancer will host this year’s Relay for Life event this weekend from Saturday, April 22, at 11:30 a.m. to Sunday, April 23, at 2:30 a.m. at the North Residential Village Bill Sudeck Track.

This year’s CWRU relay organizers aim to raise $60,000 for the society, with just over $23,000 of that accounted for as of Wednesday afternoon.

The event will bring together teams of individuals from across the university and community to celebrate, remember and fight back. It will feature games, tournaments, student performances and more.

“I think it’s a great community event that brings together people who all care about making life better for patients with cancer and making cancer less of a public-health threat,” Rose said. “It’s great exercise at a beautiful time of year.”

Learn more about the event and find out how to get involved at relayforlife.org/cwru.