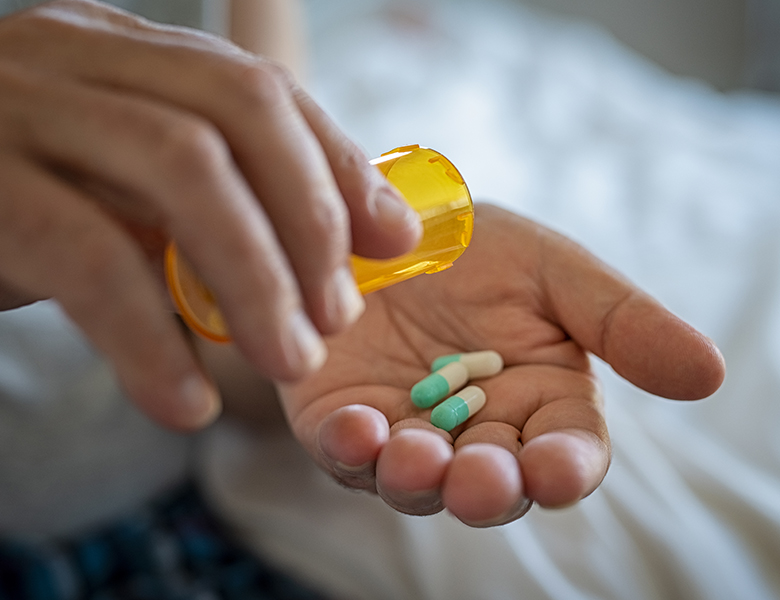 The prescribed dosages of opiate-based medications have resulted in some chronic pain patients taking more than 70 opioid pills a day.

That’s according to testimony offered by pain patient groups at a special meeting convened by the U.S. Food and Drug Administration (FDA) to consider making higher-dose opioid medications in response to this phenomenon, known as “pill burden.”

Among the 30-plus expert panelists invited to study and make recommendations on the issue was Lee Hoffer, associate professor of anthropology and psychiatry at Case Western Reserve University.

“The push for doctors to prescribe fewer opiates has been successful, yet a small, significant portion of pain patients require high doses of these medications,” said Hoffer, a medical anthropologist who researches illegal drug use, the misuse of prescription medications and substance-use disorder.

While the number of prescriptions for opiate medications has fallen over the last four years, according to the Centers for Disease Control and Prevention, overdoses attributable to these drugs have remained high.

“Part of this issue is finding the prescription rate threshold where we’ll see a drop-off in overdoses and deaths,” Hoffer said. “Still, most who overdose on opioids do not have a prescription.”

At the FDA’s campus near Washington, D.C., Hoffer was joined by pain clinicians, epidemiologists, and government and pharmaceutical representatives for two days of presentations and deliberations on opioid data and research, as well as commentary from the public.

Among the considerations of the panel were the consequences of how higher-dosage opioids—manufactured to reduce pill burden in a small population of patients—could be diverted for sale on the black market and consumed by non-patients.

For his part, Hoffer recommended against creating the higher concentrations of opiate medications, over concerns stemming from their misuse. At these high-dose formulations, even a single instance of diversion or misuse could result in an overdose death, he said.

“There are many challenges to understanding chronic pain and how to effectively treat it, especially when it stems from certain rare conditions,” said Hoffer. “Also, some older patients have a tough time keeping track of medications, which could lead to easy and deadly mistakes at these higher doses.”

The FDA closed public comment on the meeting June 30. Eventually, statements and recommendations from the experts will be delivered to the FDA and released to the public.

These materials will inform the FDA’s deliberations on the safety of higher-dose opioids. Based on that information, the agency will likely issue a formal policy recommendation, which could include such stipulations limiting the drugs’ distribution to outpatient settings.

Hoffer’s participation in the committee is his latest work with the FDA; earlier this year, he served on an agency panel that endorsed a new ketamine-related depression medication, ahead of the FDA’s eventual approval of the drug.

Officially, the June meeting was a joint assembly of the FDA’s Anesthetic and Analgesic Drug Products Advisory Committee and the Drug Safety and Risk Management Advisory Committee, of which Hoffer is a temporary member.

This article was originally published July 8, 2019.