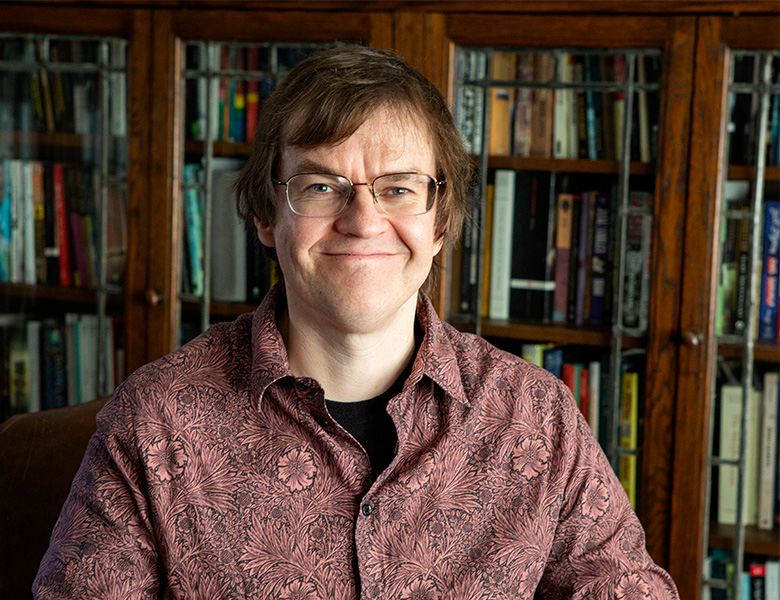 Michael Clune writes two kinds of books—creative and academic. Each is paired with one from the other genre.

For example, his memoir of drug addiction and recovery, White Out: The Secret Life of Heroin (Hazelden)—named a best book of the year by The New Yorker in 2013—has a fraternal twin, so to speak, in his scholarly work Writing Against Time (Stanford University Press), which dealt with similar themes through an academic lens, including his collaboration with neurological scientists.

This unique approach has garnered notice and praise from audiences, critics and fellow writers around the world.

This week, Clune was named a 2019 fellow by the John Simon Guggenheim Memorial Foundation, which honors scholars, artists and scientists who have demonstrated remarkable creativity and scholarship.

“Writing is its own reward, a spiritual practice. It frees me from my ordinary daily world,” said Clune, the Samuel B. and Virginia C. Knight Professor of Humanities in the Department of English in the College of Arts and Sciences. “I’m honored to be recognized, but even if I wasn’t, I’d be writing anyway.”

From more than 3,000 applicants, Clune is among 168 Fellows named for 2019—the 95th such competition. The awards come with a grant Fellows can spend in a way that provides “as much creative freedom as possible” to work; the Guggenheim Foundation attaches no conditions to the funds.

This fall, Clune will use the award to finish an academic complement to his second memoir, 2015’s Gamelife (Farrar, Straus and Giroux), which tracked his own aesthetic education through 1980s-era computer games. The new book (under contract with University of Chicago Press) will focus on arts and literature and how these topics are taught.

“When we explore these topics with students, we make judgments about what’s worth their time and not,” said Clune. “When we shape humanities education, which has the power to change lives, we affect its effect on our students.”

While Clune will be writing about education, he will be on the first break from teaching of his academic career—and anticipates its absence will influence his writing.

“I find teaching very productive and never found it to interfere with writing, which takes me less time than people imagine,” said Clune, whose writing has appeared in The Atlantic, Behavioral and Brain Sciences, Representations and Harper’s. “I personally get a lot of inspiration from teaching. A lot of my best thinking happens when I’m with students and we’re thinking critically together.”