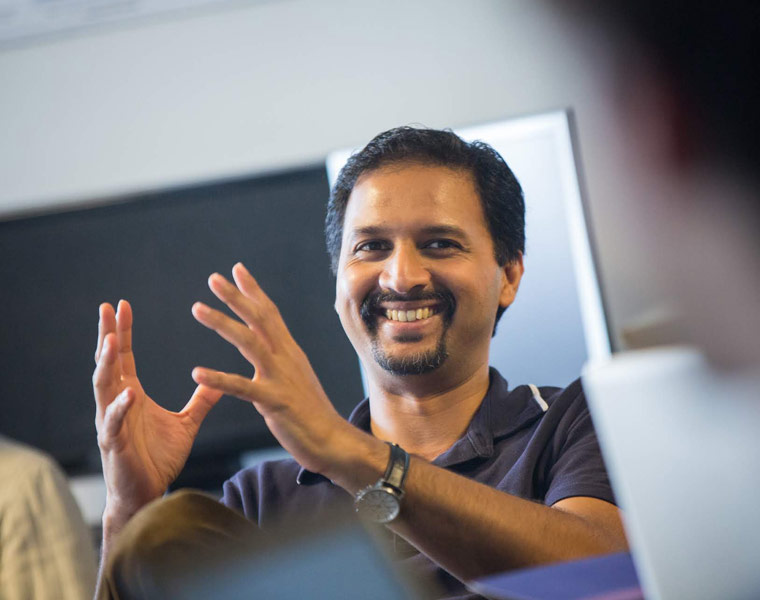 But Madabhushi, director of the Center for Computational Imaging and Personalized Diagnostics (CCIPD), is also keenly aware that a good measure of his success comes from the intelligent, innovative and hard-working graduate students who anchor his center and comprise the bulk of his 70 researchers.

Combined, Madabhushi and the CCIPD lab contributed 12.5% of all patents issued at Case Western Reserve in 2019, and many of the students are listed as co-inventors.

“They make me look good and the teaching is never one-way traffic. I probably learn more from them,” he said. “I tell them, ‘By the end of your PhD, you’re going to be one of the world’s leading experts in a particular area, so I’m also selfishly looking forward to learning from you.”

Madabhushi’s graduate students would likely take issue with any description of their mentor as “selfish.”

His designation as a 2020 John A. Diekhoff Award winner for mentoring underscores that.

“He not only cares about students’ research and scientific accomplishments, but he also truly cares about their well-being,” said one student in a nominating letter for the award. “…He is the first person who you can count on to understand you and help you out.”

Another described Madabhushi’s “positive energy” and “powerful synergistic atmosphere” in the lab and lauded him for being “a fierce advocate for women in STEM” and diversity overall. He received a 2019 RadXX Advocate award in recognition of his support to “further the advancement of women in imaging informatics.”

Madabhushi also wrote in his acceptance letter that recently he has “felt an additional responsibility to be sure our international students, especially those from the Middle East and from Iran, know that they are wanted…” He recalled how he had come to the United States from India as a graduate student 22 years ago. Today, his CCIPD trainees come from six continents and represent 20 nationalities.

“Mentoring is also about creating relationships, a segue into friendships and collaborations that last a lifetime,” said Madabhushi, who, after 15 years, still holds a weekly pizza meeting with his lab staff (now virtual, during the COVID-19 pandemic). “I have former students from 15 years ago who now work for us as consultants, and two of my former trainees are now on (biomedical engineering) faculty.”

Madabhushi, 44, came to Case Western Reserve in 2012 from Rutgers University, establishing the CCIPD that same year. He became a full professor in 2014 and endowed chair of biomedical engineering in 2016.

An accomplished researcher, author (380 peer-reviewed journal articles and conference papers) and public speaker (300 talks around the world), he is also a research scientist at the Louis Stokes Cleveland Veterans Administration (VA) Medical Center and has affiliate appointments both at University Hospitals and Cleveland Clinic.

He is a Wallace H. Coulter Fellow, a fellow of the American Institute of Medical and Biomedical Engineering (AIMBE) and a Fellow of the Institute of Electrical and Electronics Engineers (IEEE).