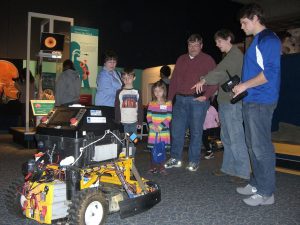 They brought with them demonstrations and a display of innovative design and engineering projects, such as a hybrid neuroprosthesis—a combination of an external brace and electrical stimulation to facilitate standing, walking and stair climbing after spinal cord injury—and a mobile robot from NASA Glenn that was developed for the fire department.