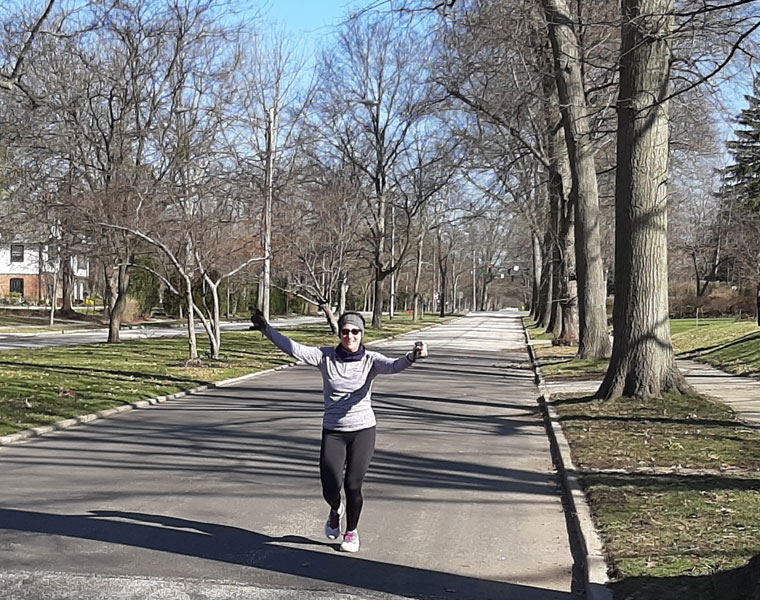 Daniel Lacks, chair of the Department of Chemical and Biomolecular Engineering and C. Benson Branch Professor of Chemical Engineering, felt a pull to get outside—and to provide a positive outlet for those who are newly working and learning from home and isolated from colleagues, family and friends. So he organized a virtual 5k last weekend to connect CWRU engineers, from wherever they are located now.

“I wanted to do something to bring people together and help us all feel like we are still part of a community, even though we are miles, and even states, apart,” said Lacks. “We keep hearing that exercise and getting outdoors is important right now. I hope the event gave people who are feeling cooped up at home something to look forward to.”

The run, which Lacks called The Distillation 5K Run, took place March 22 and attracted more than  50 participants (as well as dogs and kids) across 16 states and the District of Columbia. The rules were simple: Pick a route to run or walk and log your time. Runners from coast to coast did just that, sharing their own post-walk/run messages. Participants remarked that it was “their first run in over a year” or their “longest post-surgery run yet.” Others called out their dogs’ and kids’ participation; and, according to a Buffalo, N.Y., participant, it was pretty cold for some.

The name of the race, Distillation, refers to a prototypical chemical engineering process used to separate liquid mixtures based on the differences in volatility of different molecules. Given our current state of social separation, Lacks said, the term fit.

Lacks said he and his team hope to do more activities, perhaps including additional virtual runs, to help build up a sense of community and decrease the feelings of isolation during the “stay at home” orders in Ohio and other states. The group has plans to gather Saturday, March 28, at 10 a.m. for a “Free Energy” Vinyasa Yoga session led by Sindy Warren from Citizen Yoga Studio. The session can been joined by anyone via Zoom.