Encyclopedia of Cleveland History plots new future for city’s past 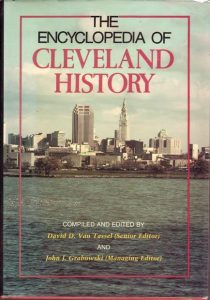 With this in mind, the Encyclopedia of Cleveland History will add up to 20 volunteer editors to direct teams of writers and researchers in areas such as immigration, transportation, sports and politics and government. (A full list of topics and directions to apply are below.)

Loosely patterned after several scholarly online encyclopedias with articles solicited or created by community members and then vetted by section editors, the Cleveland encyclopedia seeks to expand its content—including pictures and videos—while updating many of its 4,000-plus existing entries.

For more than a generation, the Encyclopedia of Cleveland History—both as a printed book (first edition, 1987) and as the first online encyclopedia of a major U.S. city (1998)—has served as the seminal single-source volume on the region’s roots and is considered a landmark in urban historical studies. 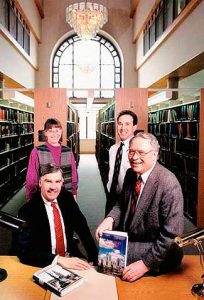 Grabowski (left) and the encyclopedia’s team, 1996

Each year, the website—housed at Case Western Reserve University—receives upwards of 700,000 page views, from all over the world.

“I’m greedy—I want a million,” said John Grabowski, an editor of the encyclopedia since nearly its inception, and the Krieger-Mueller Joint Professor in History at Case Western Reserve and the Western Reserve Historical Society (WRHS). “Drawing on the passion of our community and expertise of scholars will help us reach more people, more frequently.”

“Our main goal,” Grabowski added, “is to make certain the Encyclopedia remains a reliable vetted resource for scholars and the community.”

What’s past is prologue

The success of the encyclopedia’s Twitter account, @EncyCle, and its popular hashtag #ThiswasCle, are seen as guideposts for the project’s new direction: editors will package and share more historical content—especially pictures—on social media to deepen engagement with existing fans and find additional audiences.

“The site originated in the Web 1.0 era, when content was static and produced from the top down; our new plan is to interact more and produce content from ‘the bottom up’—without diminishing its authority or accuracy,” said Grabowski, WRHS’s chief historian. 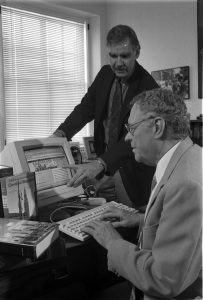 In a way, the project is returning to its roots.

In 1980, encyclopedia editor, the late David Van Tassel—then chair of the Department of History at Case Western Reserve—launched the ambitious project with Grabowski; together they led a series of subject-based task forces. Hundreds of people participated in researching and writing prior to publication, with staff at CWRU editing and fact-checking the entries.

In the decades since, readers could report errors and suggest new content, but a svelte staff struggled to keep pace.

The new editorial system will be rolled out gradually beginning this summer to allow CWRU staff to assess workload and make any necessary adjustments to planned protocols.

Encyclopedia staff will begin contacting potential topical editors in May. For more information about how to join the new phase of the project, email Grabowski at jjg4@case.edu.

Topics in need of editors:

This article was originally published April 11, 2018.