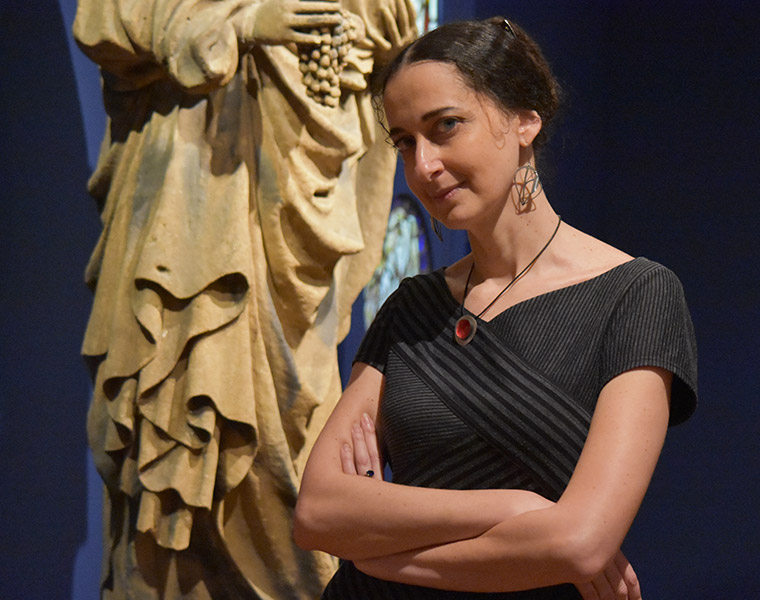 Elina Gertsman knows what it’s like to feel lost as a graduate student.

With a seemingly disinterested doctoral adviser and no mentoring program available to her, she sensed she would need to navigate her graduate school experience alone.

That was until she took a leap of faith in pursuit of a true mentoring relationship: She chose to reach out to a professor at a different university who had no affiliation with her program.

This person became a pivotal sounding board for her, offering guidance on everything from dissertation writing to career choices and the importance of perseverance.

“[She] owed me absolutely nothing—and she proved to be a transformative presence in my life,” said Gertsman, professor of art history and art. “It completely changed my view of what mentorship can do.”

She now applies this view to her own approach—one that has earned her the 2019 John S. Diekhoff Award for excellence in graduate mentoring. This honor is awarded each year to two faculty members who make outstanding contributions to the education of graduate students.

Nominations from Gertsman’s students paint the picture of a steadfast advocate whose academic expertise and intuition are matched only by her concern for each student as an individual.

“Professor Gertsman not only demands the best of her students, but offers the best of herself in return,” one student nominator wrote. “She is constructive, critical, and generous with her feedback and has enabled me to meet my academic potential during times of self-doubt.”

Gertsman, who received the Diekhoff Award for excellence in graduate teaching in 2015, is well-known for her often tough feedback, a trait her students universally praised in their nominations.

“She sets incredibly high standards, but outlines how her students can get to where they want to go, making everything feel achievable and manageable,” another student nominator wrote. “She has a knack for figuring out what students need, where they can improve and how they can do it. We’re all better scholars because of it.”

Just as her mentor did for her, Gertsman has been known to advise students who are not in her department, lending them the same level of tailored attention she provides her formal advisees.

“My goal as a mentor is to encourage the professional development of my students, keep them intellectually engaged, offer academic and emotional support, and model—I hope—the way to balance one’s professional accomplishments and personal life,” she said. “I specifically seek to offer the kind of help and advice I lacked. It is extremely important to attend carefully to those transitional moments when students transform into scholars, and scholars transform into future colleagues.”

Gertsman will be recognized with other award-winners during commencement ceremonies May 19.

The Diekhoff Award honors John S. Diekhoff, a distinguished scholar, teacher, mentor and administrator who served Case Western Reserve in several capacities during his tenure from 1956 through 1970. He was professor of English, chair of the Department of English, dean of Cleveland College, acting dean of the School of Graduate Studies and vice provost of the university.