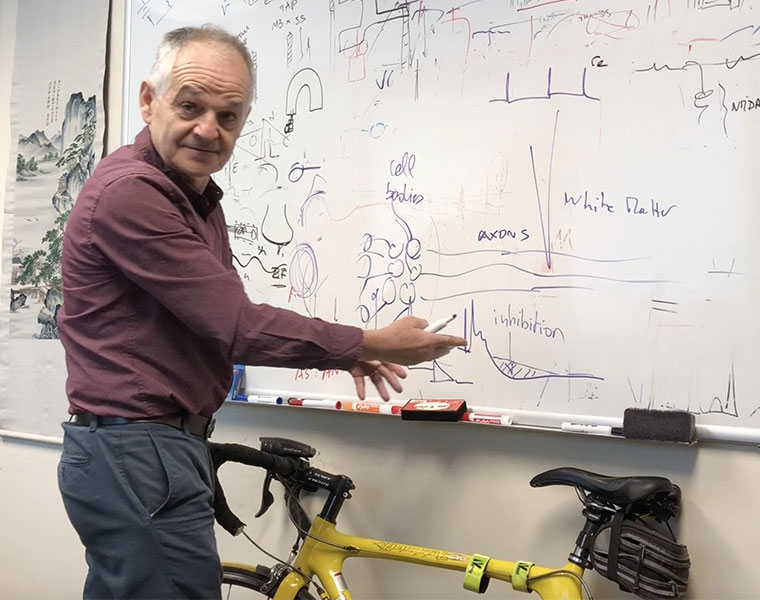 Maybe an answer to the vexing neurological mysteries of epilepsy will come to Dominique Durand during his preferred thinking time: on his 7-mile bicycle commute from his home in Shaker Heights to Case Western Reserve University.

Or maybe the critical bioengineering breakthrough Durand desires most—the ability to communicate directly and accurately with the human nervous system—will be drawn from a theory he’s already half-worked out on a brown paper napkin on the desk in his office at the Case School of Engineering.

Both are possible, maybe even more likely, because of Durand’s accomplishments and advances over the last 35 years at Case Western Reserve.

For his long-term commitment to teaching and mentoring students, and his signature work in those two primary areas of research, Durand, the  E.L. Linsedth Professor of Biomedical Engineering and Neurosciences and director of the Neural Engineering Center, will be honored as a Distinguished University Professor during Fall Convocation today (Aug. 28) at Severance Hall.

“Dominique Durand’s contributions to scholarship, to his research community, to his students and to the university are truly remarkable,” said Robert Kirsch, the Allen H. and Constance T. Ford Professor and chair of the bioengineering department. “His research is world-renowned, he has trained a large number of students who are now leaders in academia and industry, he is an accomplished teacher and he is a great citizen of the academic community.”

Durand recently reflected on his work over the last three decades—and looked ahead.

“I do this because I’m curious and love solving problems,” he said. “I’m thinking more about ‘What are the big problems and what part can I play to solve them?’ and I think that maybe I can make a dent.”

That dent is already significant: Durand said his lab is so far the only one he knows of to have successfully extracted communication signals from the vagus nerve, which controls the entire parasympathetic nervous system, including the heart, lungs and digestive tract.

He and his collaborators are also recording neural activity from cancer tumors and discovered the existence of a type of brain waves, known as ephaptic waves.

“We know those waves are there,” he said. “But we really don’t yet know how they do what they do or what their function is. I’ve just got to figure this out.”

Durand has maintained that level of curiosity since growing up on the vineyard his grandparents and parents operated in Dordogne, France. He said he’s known since he was 7 years old that he wanted to be an electrical engineer as he watched an uncle talk over amateur radio.

“I still remember thinking ‘How can you talk to somebody in the air? How can two metal plates do anything?’” he said. “I just had to find out—so I did.”

He returned to CWRU to teach and conduct research after seeing an advertisement while working at the University of Toronto.

Durand’s wife, Ellen, is retired from a job in research administration at Case Western Reserve. They have two adult children: a daughter in Cleveland, who is a speech therapist, and a son who works for a startup company in Palo Alto, California. Each family member received at least one degree from CWRU.

Meanwhile, Durand will keep bicycling to and from his lab on campus and keep working on those theories and those answers.

“You get on your bike and you are alone and you get in motion and you feel free,” he said. “It’s like being a kid again, really, but you’re also free to make amazing progress on things with your mind.”