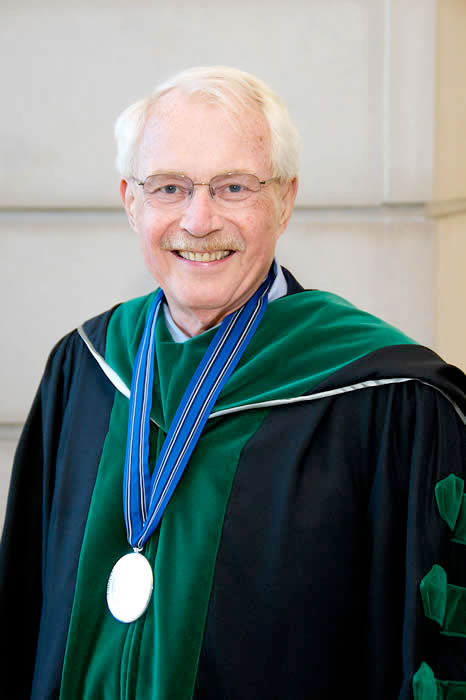 Today James M. Anderson adds another honor to an already impressive list: membership in the National Academy of Engineering (NAE).

“Jim’s entire career embodies interdisciplinary excellence,” President Barbara R. Snyder said. “His willingness to span boundaries and engage broadly with collaborators has contributed to significant breakthroughs for patients. He deserves every bit of acclaim he has received—and more.”

Last fall Case Western Reserve named Anderson a Distinguished University Professor, a designation that recognizes faculty members who have achieved international renown for their work while also contributing significantly to the campus community. With faculty appointments in pathology, macromolecular science and biomedical engineering, Anderson is renowned for commitment to instilling an ethic of cooperation among his students.

“Jim’s impact as a scientist is unparalleled, as is his ability to nurture and encourage his students,” said Pamela B. Davis, dean of the School of Medicine and vice president for medical affairs. “And he does it all with immense modesty and good will.”

Anderson came to Case Western Reserve in 1967 after earning his doctorate in organic chemistry at Oregon State University. He began conducting research in biomedical polymers at the Case School of Engineering and continued that work while earning his medical degree here. After completing his residency in 1979, he became an assistant professor. He went on to publish more than 300 peer-reviewed articles and 80 book chapters. He also has received continuous funding from the National Institutes of Health since 1970.

“Jim’s work underscores the progress possible when people of immense and diverse talent come together to solve scientific challenges,” said Jeffrey L. Duerk, dean of the Case School of Engineering. “We all can learn from his inspiring example.”

Much of Anderson’s work has focused on the safety of implanted devices, in particular the inflammation and other reactions that can occur. He has consulted extensively for the U.S. Food and Drug Administration, the National Research Council and industry. Most recently he teamed with researchers at Harvard University, the Massachusetts Institute of Technology and a Massachusetts start-up to conduct the first-in-human tests of a wirelessly controlled microchip implant. Published in the Feb. 16, 2012, edition of the journal Science Translational Medicine, the results drew global attention.