Discovery could lead to new therapies for heart disease, cancer and Alzheimer’s

Bacteria provide a well-known playground for scientists, and the evolution of these earliest life forms has shed important perspective on potential therapies for some of the most common, deadly diseases. Researchers at Case Western Reserve University School of Medicine have discovered 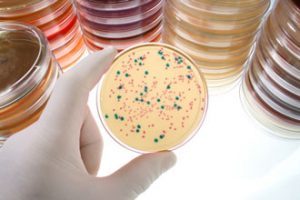 that the gas nitric oxide (NO), produced in all cells of the human body for natural purposes, plays a fundamental regulatory role in controlling bacterial function via a signaling mechanism called S-nitrosylation (SNO), which binds NO to protein molecules.

In addition, the researchers discovered a novel set of 150 genes that regulate SNO production, and disruption of these genes created bacterial cell damage resembling the cell damage seen in many common human diseases. Collectively these data point to new classes of antibiotics and several new disease treatments.

The findings, which appeared in a recent issue of the journal Science, are significant in that they establish a parallel between how bacteria and human cells behave, and they shed new light on how diseases that entail the same mechanism found in the bacteria may be treated.

According to the traditional Primordial Soup Theory, the earliest forms of life, including bacteria, utilize nitrate (the fertilizer) as an energy source. Its byproduct, NO—previously thought to play no significant role—is now revealed to be important for bacterial function, as it is in humans. This discovery suggests that for billions of years, NO has served as a fundamental signaling mechanism and important related functions have been conserved in the evolution of bacteria to man.

“The mechanism, which was known to exist in human cells but not previously thought to occur in bacteria, controls cell function and operates very broadly,” said Jonathan Stamler, MD, director of the Institute for Transformative Molecular Medicine and the Robert S. and Sylvia K. Reitman Family Foundation Distinguished Chair in Cardiovascular Innovation at Case Western Reserve School of Medicine and University Hospitals Case Medical Center, and director of the Harrington Discovery Institute at University Hospitals Case Medical Center. “Because the SNO mechanism can malfunction in ways that are characteristic of many diseases, what we learn from this research is immediately applicable to the development of new antibiotics and promises new insights and treatments to common diseases, including Alzheimer’s, Parkinson’s, heart disease and cancer. It’s not often that researchers get a big picture view of a fundamental process important to most cellular functions.”

In humans, faulty NO processing contributes to many diseases, including cancer, Alzheimer’s disease, Parkinson’s disease, heart failure and asthma. SNOs then build up on proteins, creating specific signatures of disease. Similarly in the bacteria, the researchers found the absence of certain genes from the newly discovered set contributed to a build-up of SNO on cell proteins. Knowing for the first time what genes are critically related to SNO build-up gives valuable insight into these disease processes. In addition, the turning on or off of the genes is a new opportunity to counter disease.

“The system we have today to control human cell function in the heart and brain evolved a billion years ago to work in bacteria,” Stamler said. “So a process that operates in bacteria is also the cause of many diseases. This offers the obvious opportunity to create new antibiotics but also therapeutic hope for multiple diseases.”

The mechanism at the heart of the research is S-nitrosylation, a cellular process in which a nitric oxide-based molecule binds with a protein to activate cell signaling and fuel specific or more general cell activity.

In the event such protein modifications go awry, forming too few or too many NO attachments, disease can result. Understanding SNO binding within bacteria provides a basis for developing new drugs to disable the errant protein attachments that may contribute to disease, Stamler said. Also, drugs that disrupt the SNO controlling proteins represent novel potential antibiotics.

What keeps nitrosylation under control in bacteria, the researchers discovered, is a group of 150 genes regulated by the transcription factor or protein OxyR. The genes controlled by OxyR prevent aberrant NO protein attachments from taking place and keep them from interfering with normal cell function. Specifically, the genes dictate how bacteria that breathe on an ancient substance called nitrate, which they use in place of oxygen, handle nitrosative stress, a condition that results when NO molecules bind uncontrollably with protein molecules and change their shape and function.

Prior to this research, OxyR was thought to operate only when oxygen was present. In fact, OxyR is a “master regulator” of protein S-nitrosylation that works to alleviate nitrosative stress, the new Science study shows. Relief of nitrosative stress is being sought by many companies and investigators to treat neurologic diseases, heart disease and cancer.

Nitrosative stress is the primordial equivalent of oxidative stress, the harmful free radical injury caused by breathing in oxygen, which damages cells and contributes to aging and disease. The 150 genes identified by the Case Western Reserve researchers help manage the protein modifications that occur in bacteria as they breathe and help eliminate NO when necessary, to avert potential cell damage or death. Without these genes, the bacteria cells likely would succumb to nitrosative stress.

Because nitrosative stress is characteristic of many diseases, including cancer and sepsis, what researchers learn about this state in bacteria can provide new perspective on these diseases and how to treat them, Stamler said. “We may be seeing disease evolution in its earliest form.”

The new research builds upon Stamler’s ongoing efforts to identify diseases in which protein modifications go awry to provide a basis for the development of disease-specific drug therapies. He and his team are working to determine what the 150 genes identified in this research do to isolate the genes that pertain to human diseases and spot opportunities to develop therapies to correct genetic malfunctions. Progress has already been made.