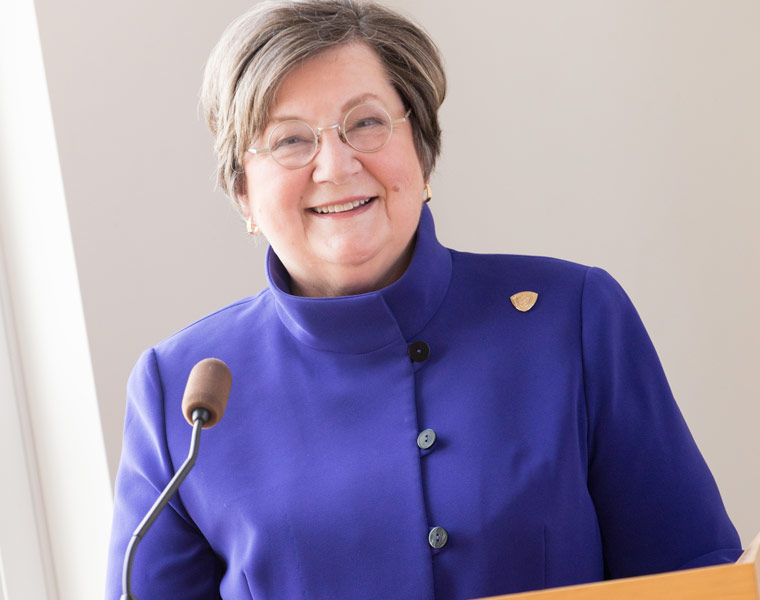 When Pamela B. Davis began her medical research career, the life expectancy of children with cystic fibrosis (CF) didn’t extend beyond adolescence. Over more than 30 years of research, she played a significant role in extending the lives of patients with the fatal genetic disease well into adulthood.

Her research contributions are among the many reasons Case Western Reserve University will award Davis, former dean of the School of Medicine, the 2021 Frank and Dorothy Humel Hovorka Prize during the university’s commencement convocation program on Sunday, May 30.

As dean from 2007 to 2020, Davis guided the School of Medicine through financial challenges, catalyzed progress in research and education and played an important role in the development of the Health Education Campus of Case Western Reserve University and Cleveland Clinic. Today, the medical school is known for innovative education and is ranked among the top 25 medical schools for research, according to U.S. News and World Report.

Research from bench to bedside

“We built a research team that was multifaceted and insightful,” Davis said, noting that the University of California at San Francisco identified their work as the biggest institutional contributor to obtain approval for the first drug that targets the CF basic defect.

For more than 30 years, Davis has been continuously funded by the National Institutes of Health (NIH), securing over $200 million in external funding as principal investigator. Among such grants were the Clinical and Translational Science Award, an NIH grant totaling $178 million of which she led two of the three cycles that established broad support structures for clinical and community-based research in collaboration with three of the school’s affiliated hospitals.

Through her leadership in commercialization efforts, spinoff companies have garnered over $300 million in external venture funding for CF research.

Under Davis’s leadership, medical school admissions have grown more selective even as class size has expanded. Enrollment in master’s programs more than doubled and the number and quality of students entering the wide variety of PhD programs has improved.

She also was a proponent of the MD program’s five pathway programs, which provide additional opportunities for students to concentrate on particular areas of interest beyond their core courses. She supported medical student mentoring of Cleveland high school students, witnessed the launch of an endowed scholarship program for inner-city students to earn undergraduate and advanced degrees at CWRU , and developed collaborative research and education ventures across Cleveland.

This focus on the community was critical to Davis’ goals as dean. “With the great need to provide better health care for underserved patients in our own community, it was not possible for our School of Medicine to sit in this community and not contribute,” Davis said.

Under her leadership, the school established programs addressing food insecurity, controlling hypertension and diabetes, and improving infant mortality in Cleveland, to name a few.

“As I reflect on the three goals I set at the initiation of my deanship 12 years ago,” Davis said, “I realized that together we have made tremendous progress on each of them: to secure our position among the top medical education programs in the world, to bring our discoveries forward to patients and to improve the health of the community.”

The prize is awarded annually to an active or emeritus faculty member whose exceptional achievements in teaching, research and scholarly service have benefited the community, the nation and the world. The recipient is selected on the recommendation of a committee consisting of previous awardees.