Live music of all genres will once again emanate from a former early-1900s carriage house in the heart of the Case Western Reserve University campus in University Circle.

Locally owned and operated Dave’s Cosmic Subs and Music will open in the space formerly occupied by the Barking Spider Tavern, a popular musical and social gathering spot for 30 years until it closed in 2016.

“It’s my first store with live music,” said Dave Lombardy, who grew up in the family wholesale foods business and left for a career as a rock singer-songwriter and stage actor in Los Angeles before returning to open his first Dave’s Cosmic Subs shop in Chagrin Falls in 1997. “So it’s come full circle for me.

“It’s a wonderful location,” said Lombardy, who built the business—and his popular Dave’s Cosmic concept—into a national brand. “It’s going to be a really cool spot.” 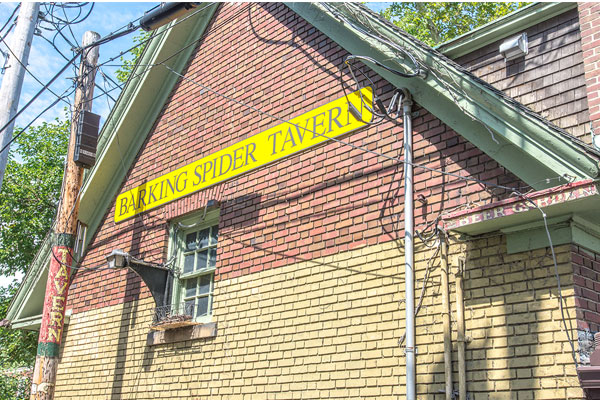 “I think the ’60s and ’70s-era concept is not only fun but intriguing,” said Lombardy, who mentioned David Letterman and Geraldo Rivera among his many noteworthy customers. “I buy the best meats, the best cheeses, the sauce is great and it all begins with the bread.”

North Coast Cosmic Subs LLC, a Dave’s Cosmic Subs franchisee, signed a long-term lease for the university-owned building at 11310 Juniper Road, nestled between the Coffee House and the popular fine-dining restaurant L’Albatros. Interior demolition has begun, and remodeling is expected to start within a month. The sub shop, bar and music venue is expected to open late this year.

“The intention is to completely renovate, restore and refresh the space into a modern Dave’s Cosmic Subs prototype that can house a full-service bar and a venue for music and live entertainment,” said Paul Sidhu, president of North Coast Cosmic Subs, a wholly owned subsidiary of Sidhu Realty Capital, a multifaceted real-estate investment firm in Cleveland.

Along with live music, other entertainment and events, such as disc jockeys, trivia nights, sports-themed events, karaoke, open-mic and poetry nights, are planned. Plans also include presenting a major music festival annually starting in 2019, called “DAVESFEST,” featuring multiple live bands in or near the Dave’s Cosmic Subs and Music location.

”I’m very familiar with the Barking Spider’s legacy,” Sidhu said. “That’s going to be very important to us. We want to complement the history and legacy that it left behind.”

The late Martin Juredine and Bruce Madorsky opened the Barking Spider Tavern in 1986 as a small beer and wine bar where local folk acts could share their talents. The “Spider” featured live music daily, with most artists playing for whatever was collected in a passed-around tip jar.

The place grew to also feature regional and national touring artists, including such bands as the Avett Brothers and the Lumineers.

When Juredine died in 2011, his daughter, Jenna, took over the operations. She closed the business in September 2016—on the tavern’s 30th anniversary—because of family obligations.

“The operator was selected, in part, because of the quality food operation and reputation they’ve developed, but also because of their commitment to revive the strong music reputation that the Barking Spider delivered to the community for many years,” said Kevin Slesh, the university’s director of real estate.